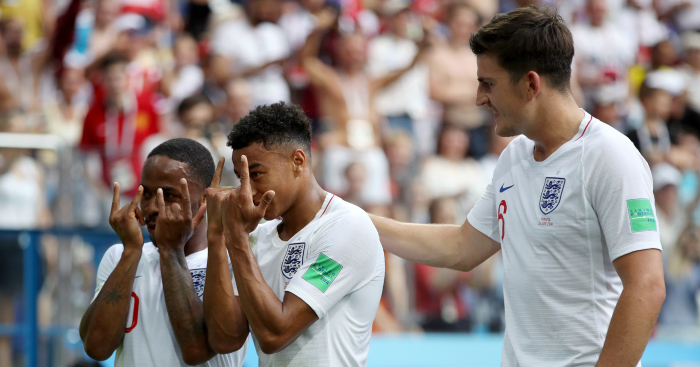 Raheem Sterling has tested negative for Covid-19. Is there still a ‘crisis’?

Crisis alerted
‘ENGLAND’S Nations League squad has been hit by a Covid-19 crisis,’ screams the front page (the actual front page) of The Sun.

First question: How many players have tested positive?

Second question: So what makes this a ‘crisis’?

Well, f*** knows, but this is one hell of a way to get Raheem Sterling on the front page of the newspaper without looking like massive hypocrites after basically claiming on Monday that alleged fighter-of-police Harry Maguire is actually a hero.

So the ‘crisis’ is that Sterling was at a party in Jamaica with Usain Bolt, who has since had a Covid-19 test. Oh and Harry Maguire appeared at a Greek court (after a ‘brawl’) where there has been an outbreak.

And that, ladies and gentlemen, is a ‘Covid-19 crisis’. Because why on earth would you wait for something to actually happen before using such bombastic language?

Test, test, test
We are told in The Sun that ‘Sterling will have to pass a Covid-19 test before he is allowed to join up with the other players’.

What we are not told by The Sun is that all of the England players will have to pass a Covid-19 test before they are allowed to join up with the other players.

They even have a source saying that “he’s now relying on medical experts to ensure there’s a safe way to join the squad”.

We’re not medical experts but we suspect that the safe way to join the squad is to test negative for Covid-19, along with every other England player.

All for one and one for all
The Sun are not the only ones who took this ridiculous line on Tuesday morning, with Sky Sports running with this headline…

…before telling us in the seventh paragraph that ‘Sterling will be tested – along with every England player selected – before they are allowed into the training camp in Burton next Monday’.

Suspicion torments my heart
The Daily Mail are going all-out with the England doom and gloom. We cannot help but think that ‘GARETH’S TORMENT’ might be over-egging this particular Nations League pudding.

Having one of your key players charged with assault, bribery and other ‘misdemeanours’ is hardly ideal but let’s not pretend that any squad announcement before Nations League games is ‘one of the biggest headaches of his reign’.

There is a desperation to spread the woe among the England squad as we are told in handy bullet points that there are:

Well, there won’t be a ‘coronavirus outbreak’ because every player will be tested and no player who returns a positive test will be allowed to join up with the squad. The same applies to every international and domestic team across the world in the coming weeks. Next.

As Jack Grealish has never been called up by England and Walker has not been called up for 15 months, not selecting either would be perfectly normal. We cannot imagine much sleep has been lost here.

And just like that, the ‘possibility’ disappeared. Who could have possibly predicted that?

Chilwell is a genuine miss but England won 7-0 and 4-0 in their last two games without Henderson and Oxlade-Chamberlain has started two England games in the last two years, so we think everything will probably be okay.

A massive concern because England’s last game – a 4-0 win over Kosovo – featured a grand total of two Manchester-based footballers in the starting XI. Panic sets in as £108m-rated winger Jadon Sancho and Premier League winner Joe Gomez might have to come into the team.

Know what I mean, Harry
The Daily Mail have been merrily peddling The Sun‘s story about Albanian ‘gangster types’ who stabbed Harry Maguire’s sister in the arm (though it’s worth noting that The Sun themselves have backtracked on that theory with talk in Tuesday’s newspaper that ‘Maguire…came to Daisy’s aid thinking she had been stabbed’).

So the Mail have told us that…

‘Harry Maguire flies back to Britain after Mykonos brawl that saw him ‘punching a cop after his sister was stabbed by Albanian thug at end of five-hour £63,000 drinking session’

…and repeated the whole story alleged on Tuesday morning as Maguire’s father arrived at court.

And yet nobody apparently thought to mention this to Martin Samuel, who penned a whole column on Maguire which begins…

‘HARRY MAGUIRE is in trouble for one simple reason: he does not know when he has won.’

Samuel then details all the great things Maguire has achieved in his career and concludes that he should learn to walk away from idiots.

‘Each one of those boneheads who made it their sorry business to target Maguire and his extended group, in Mykonos, with chants and taunts want what he has. If they care enough to insult him, to try to get a rise out of him, they would have loved to have been as good at football as he is. So he has won.

‘And the only way he can lose is by engaging and throwing all he has worked hard for and achieved so far into jeopardy.’

But according to your news colleagues, his sister was ‘stabbed’. Though whether that was by ‘rival fans’ or these mysterious Albanian gangsters differs according to what day it is today.

The ‘stab’ story was then repeated in court, which makes us think that Samuel should have possibly waited for Maguire’s defence before he opted to write about ‘boneheads’ winding up the England man, who of course was only ever really guilty of not knowing he had already won.

The big question
‘Who is Harry Maguire’s sister Daisy?’ – The Sun.

It turns out that Daisy Maguire ‘is the younger sister of Manchester United’s centre-back, Harry Maguire’.