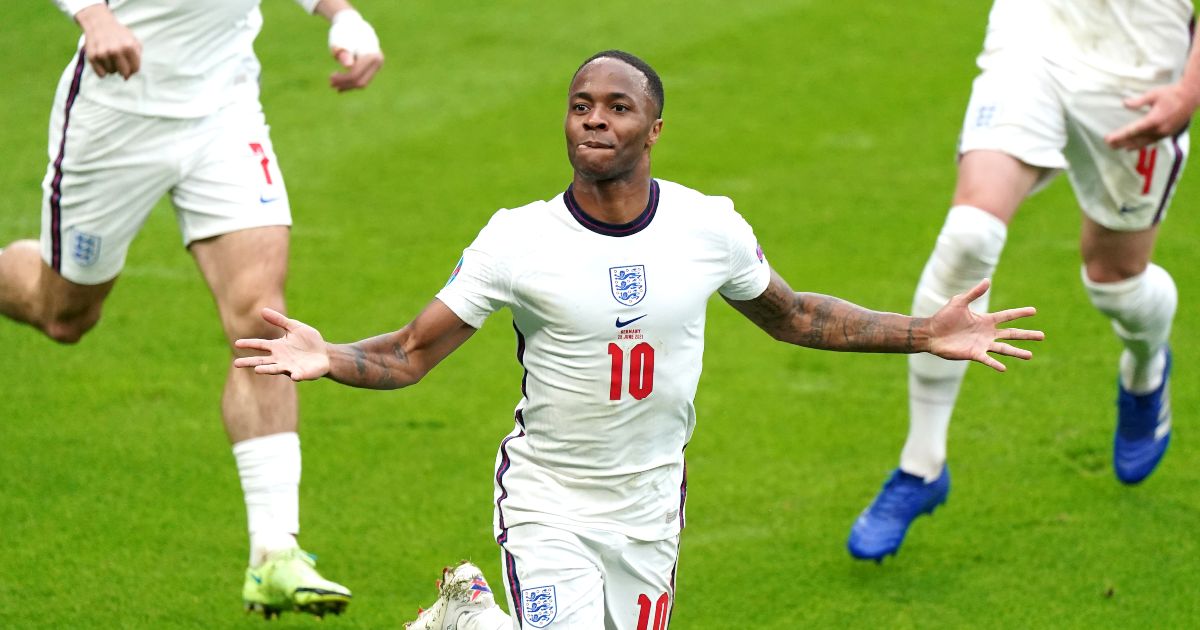 Raheem Sterling watched on, horrified and in splendid isolation, as Thomas Müller beared down on Jordan Pickford’s goal. His hands draped desperately on his head after his misplaced pass had put the German forward through. He could see tomorrow’s headlines in the red tops as Müller equalised. He knew the social media backlash would be vicious and sustained, as it had been before. He knew it was time to turn the phone off.

As he stood there, as Müller ran, as time slowed as if to accentuate the misery, the inevitable didn’t happen. The ball didn’t nestle in the far corner. The Germans didn’t get their way, as is customary. Sterling crumpled and then fell to his knees, as if crushed by the relief of it all. Three minutes later and it would be 2-0. Liberation. Vindication.

Sterling has been England’s best player at the Euros so far. Against Germany, he drove and dribbled. He saw the Harry Kane-shaped hole in the attack and thought “fuck it”. Off he went. Off he dribbled again. Off he drove. He’s been forced to shoulder the burden of carrying England’s attack at this tournament but the signs suggest it is a task Sterling is coming to relish.

What makes it all the more impressive is that this is a 26-year-old man who has had to do his growing up in public. He’s been singled out by The Sun for having the temerity to buy his mum a house. “Obscene Raheem,” they slavered. He’s been bashed for being “greedy” by The Mirror for the standard practice of negotiating more money while at Liverpool and was denounced for “shoot[ing] himself in foot” (The Sun again) when his new gun tattoo was sighted, ignoring the player’s own explanation that it was a tribute to his father, shot dead in Jamaica when he was two years old.

As is his nature, Sterling has taken the fight to the aggressors. He’s called out the tactics of newspapers, using his Instagram page back in December 2018 to draw attention to the blatant way that his young black teammate Tosin Adarabioyo was singled out by the MailOnline for buying a £2.25m mansion “despite having never started a Premier League match” and juxtaposing this with the far more sedate “Foden buys new £2m home for his mum”. It is tactics such as these, covert yet calculated, that Sterling highlighted as helping “fuel racism”.

Sterling’s riposte to the inherent and institutionalised racism of the red tops was calm and measured. It spoke of a growing maturity and a quiet dignity. In his beautiful piece for The Players Tribune in 2018, Sterling wrote: “If people want to write about my mum’s bathroom in her house, all I have to tell you is that 15 years ago, we were cleaning toilets in Stonebridge and getting breakfast out of the vending machine. If anybody deserves to be happy, it’s my mum. She came to this country with nothing and put herself through school cleaning bathrooms and changing bed sheets, and now she’s the director of a nursing home.

“And her son plays for England.”

It is these little acts of defiance that define Sterling. They speak of a man all at once comfortable in his skin, while knowing that it is his skin that makes some others uncomfortable. “If you grew up the same way I grew up, don’t listen to what certain tabloids want to tell you. They just want to steal your joy. They just want to pull you down.”

When he spoke up, Sterling showed his resilience. When he said he expects “no better” after an alleged racist incident at Chelsea, this was no glib soundbite. It is the resignation of a man who has been on the receiving end, time and again, like many black footballers in this regard, but arguably the most high-profile. It’s easy, and perhaps convenient, to forget that Sterling was called a “n*****” in 2017, before being physically attacked outside Manchester City’s training ground. What is left for someone so high-profile to do when they are on the wrong side of such abhorrent behaviour? Call it out. Rise above it. Little acts of defiance.

We all may be 18 months older, 18 months a little sadder and 18 months a little wiser, since the pandemic changed the world as we know it, but as Kane’s header hit the back of Manuel Neuer’s net, as Wembley convulsed, as people up and down the country screamed and pumped their fists, as the plastic pint pots flew high into the air, all of England seemed intoxicated by an injection of something missing for what feels like a lifetime: catharsis. In this moment, this was all there was; the pressure valve released, if only for an evening. Raheem had played his part. Raheem can buy his mum as many mansions as he wants if he keeps playing like this. Maybe get another gun tattoo or two.

For those of who place more value on the colour of a person’s skin than their character, this must be a confusing time. You can dismiss an act designed to promote equality and inclusivity, while raising awareness of racial injustice, as Marxism if you want. You can boo this gesture, while not knowing a single thing about Karl Marx. We all see you. We all know you.

So this is for the knuckle-draggers. This is for the taking-the-knee-booers. This is for those clinging to the reflected glory of an empire that no longer exists and still fighting a war that ended 75 years ago. It’s not too late for you to step into this brave new world. And for those who refuse to take this leap, pity them. For they are the joy-stealers. They will try to pull you down. Resist. Little acts of defiance.

“It’s clear to me that we are heading for a much more tolerant and understanding society, and I know our lads will be a big part of that,” Gareth Southgate declared after the final warm-up friendly before the tournament. There is one man playing a larger part than most. Ladies and gentlemen, Raheem Sterling. The hero that England needs right now.

Go and buy From the Jaws of Victory right now. It’s ace.