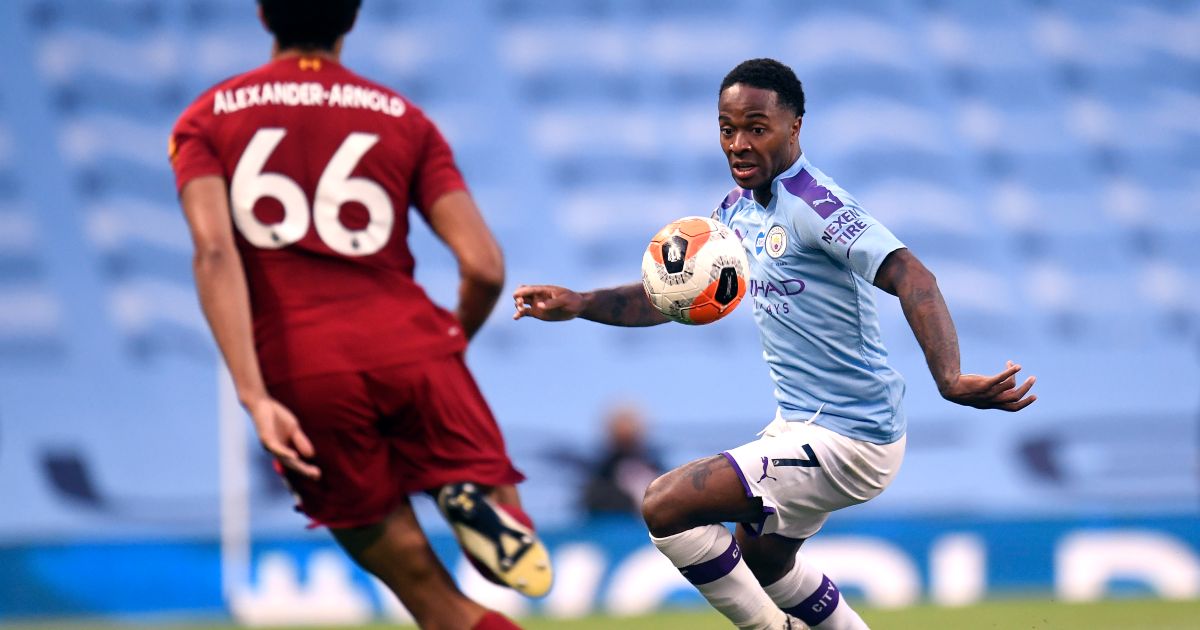 The Premier League is back. Send your thoughts to theeditor@football365.com…

Overrated Sterling
As a Liverpool fan when we sold sterling to city for £50m I felt we got the better end of the deal by far.

I don’t think I’m wrong in saying most Liverpool fans felt that way.

Sterling had a lot of potential but he never improved. He still wasted the same chances. Still made the same bad decisions. Still scored the same back post Tap ins and still ran fast. He had all those attributes from when he was academy player.

After we sold him to city I did wonder if pep would make him a better player. And as the years went by I saw him score more back post Tap ins at city (that’s primarily how pep plays) and I saw him get more praise. But I never saw him get better. He still misses the same chances. He still makes the same bad decisions. Which is why city and England fans find him frustrating. And why Liverpool fans were never that bothered he left.
Lee

Clearing up Raheem Sterling confusion
Interesting to hear a City fan’s take on Raheem Sterling, they are usually a pretty even-handed bunch and they see him play the most.

For the other people saying he is confusing or perplexing I think I can clear it up. He is a good player but no more, one with very clear strengths – namely pace, low centre of gravity, intelligent movement. But also one with very clear weaknesses – essentially technical stuff such as initial control, ball manipulation and therefore passing, finishing and end product.

These strengths lend themselves to being an effective cog in a superior machine that has much better players than the opposition. Most notably for City where he gets good ball (he can run onto) in good (spacious) areas. This allows him to rack up the numbers with goals from tap ins or a series of snapshots until he catches one right, beating men by pace and momentum, and setting up goals with the assist equivalent of a tap in. Nothing too technical or precise. It’s a similar story with England for qualifiers.

However the stats he therefore posts tend to mean his weaknesses and wastefulness gets glossed over or missed. And when they become apparent in more demanding situations – such as City’s competitive league games against Liverpool and Man Utd (the Derby being a leveller) – everyone acts surprised.

Likewise for England for whom he has been poor in tournaments when we a rarely comfortably superior to other teams. Wednesday night’s slightly iffy penalty summed Raheem Sterling up perfectly. The one bit of ‘end product’ he produced was not a final ball of his making but attracting a silly challenge from the opposition.

I actually wonder if in due course players such as Sancho, Grealish and Foden will make Raheem Sterling look like a bit of a relic of a bygone, less technical age for England.
Ronnie Buzzard, Manchester

Raheem Sterling and nurses
In his assessment of Raheem Sterling, Paul Bohknecht’s made the often used comparison between the salaries of Footballers and Nurses.

There is of course some logic to this view. For Raheem’s reported requested salary of £300k a week you could employ 520 nurses for a year who would save the lives of thousands of people and give care and support to those who most need it in our society or, you could employ 1 Raheem Sterling who won’t save lives no matter how nicely you ask him. He just won’t.

City fans may argue that the comparison with Nurse’s is somewhat flawed and I tend to agree because what would Manchester City realistically do with 520 nurses however good they might be at football? You can only play 11 at a time and they are after all a football club. A football club with a history of mostly underachievement and failure and remain so relative to the obscene amount of money they have spent, but a football club nonetheless.

City fans might also say that players salaries are paid for by the fans buying shirts and that Nurses don’t sell football shirts. Personally I feel they might if you asked them nicely. I mean they get paid a pittance don’t they? They’d probably snap your arm off and then sew it nicely back on.
Still, Nurses eh? Black tights. Sensible shoes. Lovely
Rocky Foreshore

Klopp’s surprise at TAA exclusion
So Klopp says he is ‘surprised’ and does not ‘understand’ how TAA could be excluded from the England squad, pointing out ‘in the last two seasons at least, let me say the season before and the season before that, the stand out right-back in world football’. It does feel a bit mad not to bring him? Arguably the closest thing to a playmaker in a champions league winning squad?

Now there are solid arguments that TAA is perfect for a very specific Liverpool system where he has three heavy pressing central midfielders and Van Dijk to give him the security to create plays from unusual positions and that he wouldn’t have this for England. But really if Southgate is going for a safe central midfield anyway, maybe TAA is the best option we have to feed our talented attackers who often get disconnected in the tough games? The other concern is the slow but strong McGuire and the lackadaisical but skilled Stones not being enough to cover him, but we need those two being at their best regardless of the situation, so it doesn’t really change the calculation.

While we are at it, maybe Saka would give us the best chance at recreating that beautiful full back pivot that made the Champion’s League Liverpool squad so amazing:

Nick Pope should be England’s number one
I’m completely confused by all the talk of Nick Pope not deserving to be England’s number one on the basis of this international break. He made one mistake and it feels like that’s been enough for people (including F365) to yearn for Jordan Pickford. But over the last two or so seasons Pope has been significantly better than Pickford in the league and has been a steady and impressive presence while Pickford has been dropping clangers almost on a monthly basis. Am I losing my mind here? Why wouldn’t England want Pope’s steady hands over Pickford’s ‘anything could happen’ energy? Pope has been one of the best goalkeepers in the league this season.

Now granted Pickford’s form for England has tended to be better than his form for Everton, but it still feels a bit risky to have such a loose cannon as your number one when you can have a much better alternative who it should be noted has thrived in a team that is inferior to Pickford’s. Infact on the basis of the last 2 seasons, Pickford shouldn’t even be England’s second choice goalkeeper (that should be Henderson). Weird times.
Turiyo Damascene, Kigali, Rwanda

England’s Depth
Looking at the Famous Euro 2020 Ladder I’m struck by the incredible depth in the squad. Can any other country match this? I don’t think so.CHO at 43, Maddison at 45, Tomori (currently first choice at Milan) not even on the list.

And they’re all so young! Only a matter of time before they’re labeled England’s new “Golden Generation” at which point I’ll go to the pub to drown my sorrows at the lack of journalistic creativity.
Ed

World class is irrelevant
The reason England won’t win the World cup is cause the media and supporters care too much whether one of their players is world class or not. I would chew my right arm off to have a player anywhere near his standard in the Republic of Ireland setup, so be thankful for him you ungrateful sods.
Jamie M

Penalties, unnatural positions
A lot has been said about ‘unnatural positions’ for handball penalties, but something that’s ground my gears for years is the unnatural actions of attackers to win a penalty. I only watched two sets of highlights in the week – England v Poland and Germany v North Macedonia. In the former, Sterling basically lets the ball run out of play so he can stop and take the contact – if the contact hadn’t happened, you’d have asked ‘why did he do that? Not the natural action of an attacker’. In the latter, Sane hangs his foot out a good 18 inches to the right of where he would plant it if he was genuinely trying to turn back to where he’d put the ball, because a defender had slid in near to him (but not towards where he was going).

To me it’s clear that a) they are cheating and b) they have been coached to do it. The weird thing is that the Pires-style ‘hanging a leg out’ trick seemed to get picked up and chased out of the game quite quickly, but this form of unnatural placement of the limbs seems to go unnoticed, apparently because the defender is on the ground. So why is one form of unnatural biomechanics penalised while the other is ignored? (that’s a rhetorical question, it’s because FIFA think goals, even if only penalties = entertainment).
Shappo