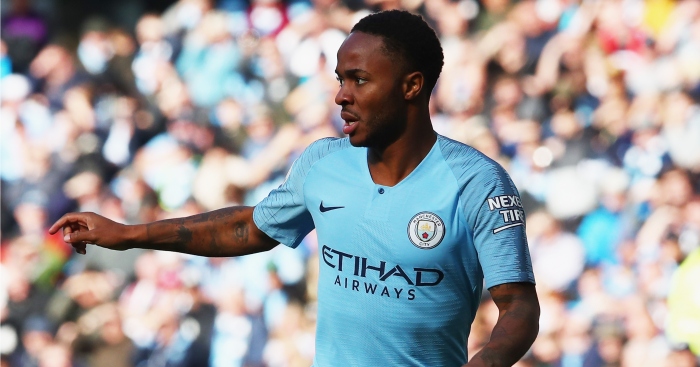 Raheem Sterling has broken his silence after being subjected to alleged racist abuse by Chelsea ‘fans’ on Saturday.

Manchester City were beaten 2-0 by Chelsea at Stamford Bridge on Saturday evening, but the game was overshadowed by an incident involving Sterling as he prepared to take a corner.

The England international was seen laughing as a number of Chelsea ‘fans’ hurled verbal abuse at him because he kicks a football for a different team.

Chelsea and the Metropolitan Police are investigating claims that some of the abuse was racially motivated, something which Sterling appeared to confirm in an Instagram post.

‘Good morning. I just want to say, I am not normally the person to talk a lot but when I think I need my point to be heard I will speak up,’ he wrote.

‘Regarding what was said at the Chelsea game, as you can see by my reaction I just had to laugh because I don’t expect no better.

‘For example, you have two young players starting out there their careers. Both play for the same team, both have done the right thing, which is buy a new house for their mothers who have put in a lot of time and love into helping them get where they are. But look how the newspapers get their message across for the young black player and then for the young white player.

‘I think this is unacceptable. Both innocent, have not done a thing wrong, but just by the way it has been worded, this young black kid is looked at in a bad light, which helps fuel racism and aggressive behaviour.

‘So for all the newspapers that don’t understand why people are racist in this day and age, all I have to say is give a second thought about fair publicity and give all players an equal chance.’

Sterling included pictures of the two young players in question in his post: Tosin Adarabioyo and Phil Foden. We discussed the ridiculous coverage they received at the time.