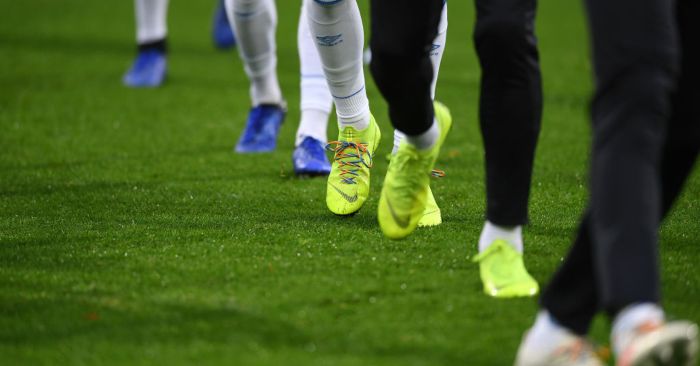 It was as I was reading John Nicholson’s excellent piece on the symbolism that the poppy has taken on in football that the thought first occurred, but it’s only with the clock ticking down to the 2019 Rainbow Laces event that I was able to join the two halves of it together: there is an irony in that many of those who disagreed with the points made and who see the poppy as a symbol that is sacrosanct and should never be removed from footballers’ shirts will, this weekend, say something along the lines of – but not exactly:

“I don’t know why football needs to concern itself with this, I don’t care if you’re gay, straight, tall, or short – as long as you’re good at football, that’s all that matters.”

I’m generalising, obviously. I’m sorry if you fall into the pro-poppy and the pro-rainbow laces camps, but this is clearly not aimed at you.

Less than a fortnight after all hell would have broken loose if one out of 11 players one weekend wore a shirt without a poppy sewn onto it, some fans will attend their team’s game this weekend and not even register that it is the awareness week to promote LGBT inclusion in the sport.

(NB – it’s worth pointing out here that, while I’m very pro Rainbow Laces and very pro it being a priority for clubs, the second it becomes mandatory on pain of vilification in the press, stadium-wide booing, and rainbow mascots then we’ve probably gone a little bit too far).

Yet, it’s still funny to watch adults not see the humorous side of that double standard – that there should be no politics in football, unless it’s whether someone is respecting the troops. My hot take is that, given the levels of discrimination in society at the moment, football can probably take a little bit more politics – especially when it comes to diversity, attitudes towards minorities and inclusion.

The “I don’t care if my team has a gay player if they’re good” line is, of course, well-meaning – and nobody should be criticised for thinking that – but it comes from a position of misunderstanding. It’s not that LGBT people want to announce themselves to the world; it’s that they have to, or it snowballs. A Premier League footballer couldn’t be seen holding hands with his boyfriend without the subsequent press and public intrusion the same way that one can hold hands with his girlfriend. On a much lesser scale, have you seen how hard it is to buy a male-to-male or female-to-female Valentine’s Day card?

Rainbow Laces don’t change what your local Asda stocks, obviously, but this is all part of the bigger picture. What they might change is how the footballer and his boyfriend feel behind closed doors – to see that some teammates happily take a few minutes out of their day to at least demonstrate their support.

Every year, every player is sent a pair of laces. Every year, how many of them get used? I’d be amazed if it even tips into double figures. And when asked, clubs will point to the rainbow captain’s armband or the rainbow corner flags – as if they’re not just standard issue for the weekend and they’re doing the absolute bare minimum required.

The players probably don’t even lace up their own boots, so how hard can it be to check with individuals that they’d be happy to have the change and then get the kit man to do it? A friend who, up until recently, worked as a press officer for a Football League club told me that he personally asked several high-profile players at that club to do it and, as soon as they were actually told what it was about and for, they agreed – but he still had to lace up those boots. That club even spotted that it was good PR to leave the corner flags in all season because LGBT inclusivity isn’t for one weekend only.

“Some players may object on religious grounds,” you might say – and that’s fine; it’s not mandatory. Some players might object to the poppy but nobody seems to care about their feelings then. And even then you might argue that seeing the impact of the campaign might help players realise that being religious and an LGBT ally is possible.

Football has a masculinity problem, which most likely stems from a need to gain any small advantage wherever possible. Feminine qualities are seen as disadvantageous and are also linked with being gay, therefore there is a resistance to accepting them. The weird juxtaposition is that the metrosexuals of the late 1990s and early 2000s should probably have paved the way for that change in attitude. But you still get dads shouting at their sons to ‘man up’ when playing school or junior football.

Rainbow Laces isn’t about forcing anything onto others. It’s about a demonstration that all people are welcome in a sport that – let’s face it – doesn’t exactly have a good record or image on discrimination at the moment.

Let’s hope the numbers getting involved are higher this year. But I won’t hold my breath.

David Mooney is on Twitter and the wonderful Blue Moon Podcast.