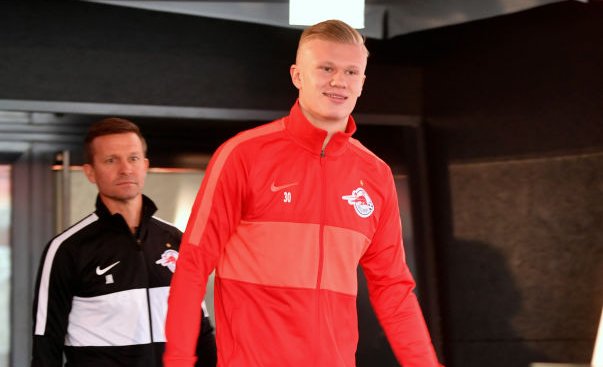 Mino Raiola says Erling Braut Haaland chose to reject a move Manchester United to sign for Borussia Dortmund because the youngster felt it was “not the right step in his career”.

Haaland, 19, had been linked with a switch to Manchester United after impressing with eight goals in the Champions League this season.

Dortmund said on Sunday that the Bundesliga club had “notified Haaland’s current employer to meet all the contractual conditions necessary for a transfer in good time” ahead of the transfer window opening.

Haaland will officially join the Germans on January 3 and then head out to the club’s training camp in Marbella.

There had been reports that United had pulled out of a deal over Raiola‘s involvement but that is something the agent denies.

On reports of Raiola demanding a share of a future sale, the agent told the Daily Telegraph: “I do not know if Manchester United are briefing this but if they are then they are covering their own loss and that I find strange and disappointing.

“There was no fall-out between me and [United executive vice-chairman] Ed Woodward. It was just a normal negotiation and the player has chosen a different path.

“If they want to blame someone then, fine, blame me but the player is happy. He has made his choice and we went through a normal process.”

And Raiola also revealed the reasons why Haaland didn’t end up at United after they “spoke to him the most”.

“The club that he had the most direct contact with him was Manchester United,” Raiola added.

“They spoke to him the most. Everybody had the chance to talk to him in person. We let that happen especially when he knows Ole.

“Clearly he felt that at this moment it was not the right step in his career. There is nothing against Manchester United or Ole.

“He chose Borussia Dortmund ahead of them and other clubs and I’m very happy because he is going to the club he wanted to go to and that is best for him right now.

“When you are 19 then maybe you prefer not to go to the Premier League.

“The offer from Manchester United was good. It was not about the economics. It is just the player chose Borussia Dortmund at this stage of his career.”