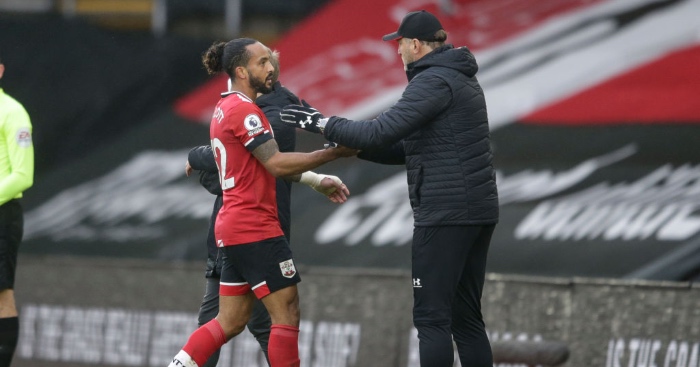 Ralph Hasenhuttl has called Theo Walcott a ‘fantastic signing’ after the Englishman scored in Southampton’s 1-1 draw against Arsenal.

The Saints went ahead in the 18th-minute thanks to Walcott. He raced through the Arsenal defence and was found by a brilliant Che Adams pass.

He dispatched of the opportunity with a dink over the keeper to score against his former club.

Southampton led at the break but soon conceded in the second half.

Pierre-Emerick Aubameyang was played through by Eddie Nketiah and fired the ball past keeper Alex McCarthy to make it 1-1.

Southampton had an extra man for the last half an hour as Gabriel Magalhaes received a second yellow card and was sent off.

Speaking after the draw, Hasenhuttl told reporters: “We have shown what we have learned in the past and that is to play our game, it was a good performance, not all the time, but we get more and more confident playing in possession.

“They tried more risks after half-time, pressed a little bit earlier and automatically you get a little bit under pressure. This is a team that is normally above us in the table.

“It was good to see we can still be competitive. Teams have respect for what we are doing and how we are playing. I am OK with a point.”

Speaking about the goalscorer Walcott, Hasenhuttl said: “Walcott is a fantastic signing. Footballers are getting younger and younger but the older ones who want to be professional can still help you and I am very happy he is here.”