Home All The News Hasenhuttl: Man Utd were celebrating like they won the Prem title 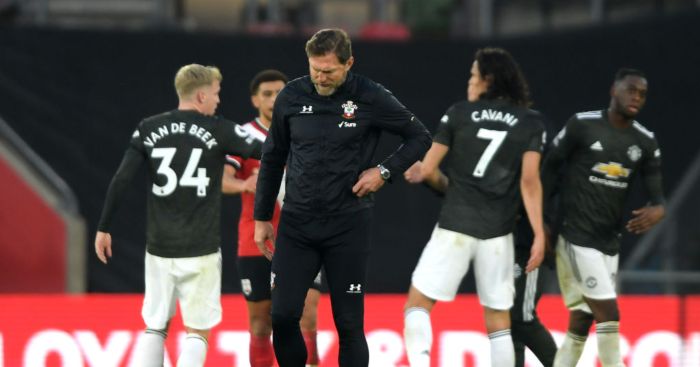 Ralph Hasenhuttl says that Man Utd were celebrating “like they had won the Premier League” after their 3-2 win over Southampton.

Saints were on course for their first home league win against the Red Devils since 2003, with Jan Bednarek and James Ward-Prowse giving them a two-goal cushion heading into half-time.

But Man Utd boss Ole Gunnar Solskjaer’s decision to turn to summer signing Edinson Cavani at half-time proved inspired, with the veteran striker setting up Bruno Fernandes before scoring a brace to seal the win at the death.

OPINION: Premier League winners and losers has questions for Arteta

It was the 10th time Man Utd had come from behind to beat Southampton in the Premier League era, but pride rather than frustration was Hasenhuttl’s overriding feeling after full-time.

“You can hear them celebrating in their dressing room,” Hasenhuttl said following the match.

“You know what you have done today and how tough an opponent you have been because they were celebrating like they had won the Premier League.

“That was the thing for me because it is definitely a statement when they are celebrating like they were because it was tough. They had to play the best they can to win against us and we can be proud of how we played.

“We had some fantastic moments – the best I think we can against such sides. I am very happy about what we can play today. For 2-2, that is okay for us, but then we conceded a third goal. We played as good as we can today.”