Home All The News Hasenhuttl: Southampton can thrive during busy schedule 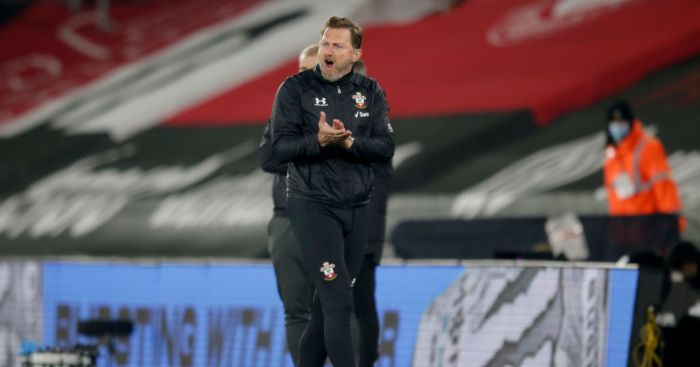 Southampton boss Ralph Hasenhuttl has warned their Premier League rivals they are ready to embrace the gruelling upcoming schedule.

The Saints will play nine times over the next six weeks and the Austrian believes this type of period suits his squad.

A trip to Wolves on Monday begins the hectic festive spell.

This time last year, a 2-2 draw at Arsenal saw the south coast club end a run of six defeats from seven and embark on an impressive six wins out of 10 league matches.

Hasenhuttl insisted: “It is always (about) hard work, but now we are without a break until March and this is definitely a long time.

“I think we showed last season we like to play in this rhythm and the more rhythm we get in our game, the better we are.

“We are physically a strong team and, although we play an intense type of football, we love three games a week and this busy time over Christmas.

“This is why we need every player and for everybody it is key to stay fit because the chance sometimes come quicker than you think and hopefully we don’t get any long-term injuries because we do need every player.”

Southampton will hope to call upon last season’s top goalscorer Danny Ings shortly, but he is not expected to be fit to feature at Molineux on Monday.

A knee injury last month resulted in the England international requiring surgery and, while his rehabilitation has gone well, the striker is still unavailable.

It has opened the door for Theo Walcott to play in a more central role and, despite rejecting the chance to use Shane Long or Michael Obafemi in Ings’ absence, Hasenhuttl has urged the fringe members of his group to step up.

“He is walking around quite good but still time to go. It looks good and no complications,” the Southampton boss said.

“Everybody must take responsibility from Ingsy not being part of the game. Without Ingsy we lose some qualities in some situations, but we have to handle it in a different way.

“We have a lot of offensive players in the squad and they are not playing all the time. Now they have the chance to show up and who does it best gets the chance to play.

“If they do well and Danny Ings comes back, it is always you never change a winning team, so they know they have a chance now.”