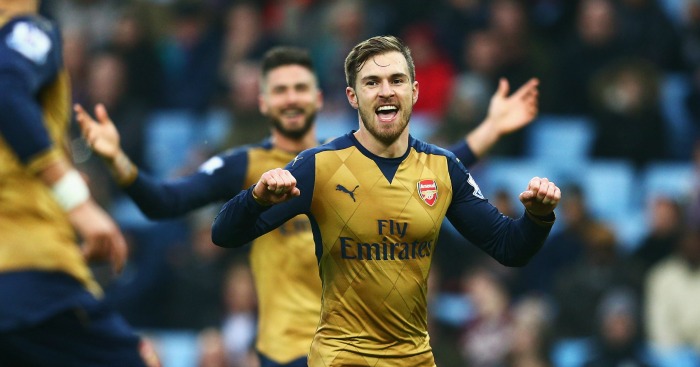 There are no sweeping judgements to be made after beating this Aston Villa team. In fact, it’s worth considering a rule whereby anybody who loses to them is automatically docked ten points. Remi Garde’s strugglers have all the hallmarks of a doomed side: No midfielder putting their foot on the ball, defenders panicking, individual mistakes and Alan Hutton. Villa need 34 points from their last 22 league games to total 40 points, and will be lucky to reach 25.

Arsenal were not at their scintillating best, understandable after their midweek Champions League escapology act. Nor did they need to be. In order to beat Aston Villa, two or three moments of clarity is enough, and Arsenal scored with both of their two first-half shots on target. Villa’s defence has all the serenity and order of rush hour in Rome. There is no empire crumbling at Villa Park; merely a club slumping further into ruin.

Not that this was an entirely meaningless exercise for Arsenal, of course. Olivier Giroud became the seventh Arsenal player to reach 50 Premier League goals with his early penalty, while Mesut Ozil registered his 13th league assist of the season, a total beaten by only 17 players in Premier League history across an entire season.

Before kick-off, David Moyes said that the “jury is still out” on Ozil. Presumably he meant “out” as in out at a pub, watching the German’s majesty on television in open-mouthed amazement. Only one of those two is currently unemployed.

Most important was the contribution of Aaron Ramsey as a central midfielder, goalscorer for the second league game in succession. “For him it is a good opportunity if he plays there, that is where he prefers to play,” said Wenger before the home game against Sunderland. Opportunity knocked. Ramsey has answered the door.

It was Arsenal’s second goal that best displayed Ramsey’s ability. He tackled Jordan Veretout in Arsenal’s own third, the ball falling to Theo Walcott. When Walcott received the ball before setting Ozil free, Ramsey was 30 yards behind play. His determination ensured that he was in position to finish the German’s sideways pass. Penalty box to penalty box in less than ten seconds.

“I used him on the right because he gives us a balance, because we have Özil, who is an offensive player, we have [Alexis] Sánchez, we have Giroud or Walcott [up front], and we have [Santi] Cazorla, so to balance a bit defensively I use Ramsey on the right,” Wenger said in late November, before shifting Ramsey’s position. “That’s where I will certainly continue to use him, unless the game demands to attack.”

You could see Wenger’s point. With the combination of Cazorla and Francis Coquelin proving so effective, Ramsey could only really be crowbarred into midfield on the right, tucking in when possible as Hector Bellerin overlapped. It’s not as if that solution has produced unsatisfactory results.

Yet having Ramsey in Cazorla’s role does provide Arsenal with a different option. The Welshman is as likely to run with the ball as pass it, and prides himself on those late runs from deep. He was the game’s best player by a distance.

During his last 90 minutes before injury (against West Brom), Cazorla made 127 passes and had 143 touches. Against Villa, Ramsey managed 78 passes and 98 touches. Fewer touches and passes than Arsenal have come to expect from a central midfielder, but Ramsey was no less effective.

“Part of the job in the middle is to tackle,” Ramsey said after the game, when asked about his role at both ends of the field. No player on the pitch completed more. This was close to the complete midfield performance, albeit against weak opposition. Arsenal supporters will hope for more of the same.

It’s not just that Ramsey’s abilities are suited to a central role, the tweak also creates a space on the right wing for a more natural wide player. With Alex Oxlade-Chamberlain out of form and favour, Joel Campbell has taken his chance with glee.

The above graphic (courtesy of Opta) indicates the dominance of Arsenal’s right side during the first half an hour, with Campbell seeing far more of the ball than Walcott. In fact Walcott was used as the surprise tactic, catching Hutton out of position.

Necessity has not been the mother of invention for Arsene Wenger, for he was already well aware of Ramsey’s aptitude for a central role. Yet Cazorla’s injury has given Ramsey a chance to impress in his preferred position. Initial signs look extremely promising.

Rather than try and give a passable impression of Cazorla’s passing game, Ramsey offers Arsenal a very different attacking threat. With the Spaniard ruled out for at least three months, Ramsey is central to Arsenal’s season once again. Literally.