Home Arsenal Tearful Ramsey reflects on ‘hell of a journey’ 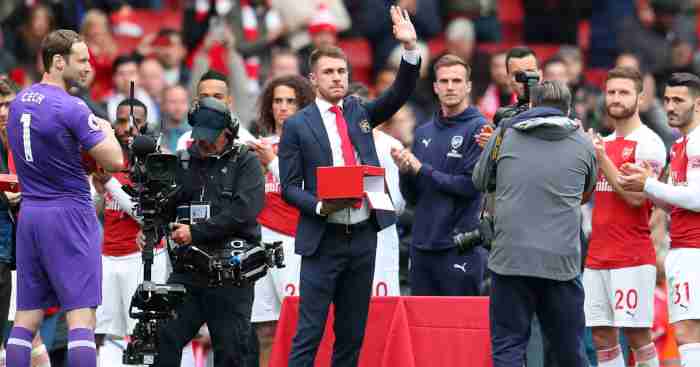 Aaron Ramsey bade an emotional farewell to the Arsenal fans on the Emirates Stadium pitch at the end of their game against Brighton on Sunday.

The Wales international, who will join Juventus in the summer, has already played his last game for the club, having been ruled out for the rest of the season with a hamstring injury he sustained against Napoli last month.

Ramsey was presented with an award for his service to the club at the end of the 1-1 draw with the Seagulls, along with retiring goalkeeper Petr Cech and injured striker Danny Welbeck, whom it was announced would also be leaving in the summer.

“It’s very emotional, it’s been a hell of a journey,” Ramsey, who waved goodbye to the fans on a lap of honour after the game, said on Sky Sports.

His voice cracking, he added: “Eleven years of my life, so much has happened in that, when I look back. You can tell by my voice how much it means to me.

“I’m just grateful for the opportunity to play for this great club and spend so many years here.

“I spent 11 years here, I came here at 17-years-old a boy, and I’m leaving a man. I’ve got a family, my wife, my kids, so much has happened, I’m just grateful for the opportunity here.

“Obviously I’m really excited for the new challenge and new chapter in my life, but today it’s all about this.

“This is where I grew up, I just want to take this in today and let it settle in for a few more days before I can really look forward and concentrate on that.”

Petr Cech and Aaron Ramsey spoke to Kelly Cates about their time at @Arsenal.

Cech paid tribute to his team-mate, saying his departure would be a “big loss” for the club.

“I think when he came from Cardiff nobody really knew how great a player the club brought in and I think he gave everything he could all those 11 years,” said the goalkeeper.

England international Welbeck’s five-year spell at Arsenal has been blighted by injury. He has not played since breaking his ankle in November.