Home All The News Ramsey: Know what I need to be ‘complete midfielder’ 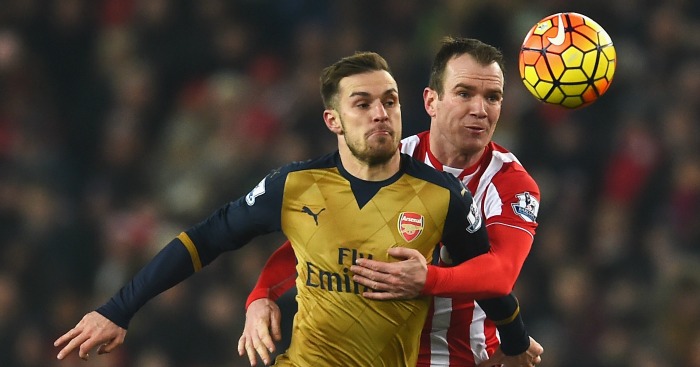 Aaron Ramsey says there is a lot more to come from him as he looks to develop into the “complete” midfielder at Arsenal.

The Welsh international, who spends most of his time in a central role, has scored six goals this season in his 31 appearances for club and country.

Ramsey hopes to strike the right balance between getting up the pitch – which he prefers – and helping his team-mates out by defending when required.

“It’s obviously a balance but if you do sense an opportunity to break away from your man to get into the box or to be free in the box, you have to take it because you can score a goal from it,” he told Arsenal.com “But you have to get back in as quickly as possible and when you are, try to get a bit of a breather then.

“And then it all starts again. I prefer to get forward, to get on the end of things, to create things. But it’s important to defend and help the team out defensively as well.

“But it’s also nice when you win the ball in quite a deep position and then you can start an attack which leads to a goal. That’s quite rewarding as well.

“An all-round midfielder needs to have that, where you can defend, you can tackle, you can create goals, you can score goals. That’s the complete midfielder that I want to be.”

The 25-year-old hopes to evolve with football after admitting the game is getting quicker and more physical every season.

“Your time on the ball is definitely a lot shorter now so you have to try and make your decisions and try and have options a lot quicker than before,” he said. “It’s just the way the game is going.

“It’s becoming a lot quicker, a lot more physical, so you have to be able to make decisions a lot quicker and move the ball quicker as well.

“I feel really confident and comfortable in the middle. I back myself to put in performances every week.

“The game is always developing and the demands are always a bit more every season. Hopefully I can continue developing as a player.