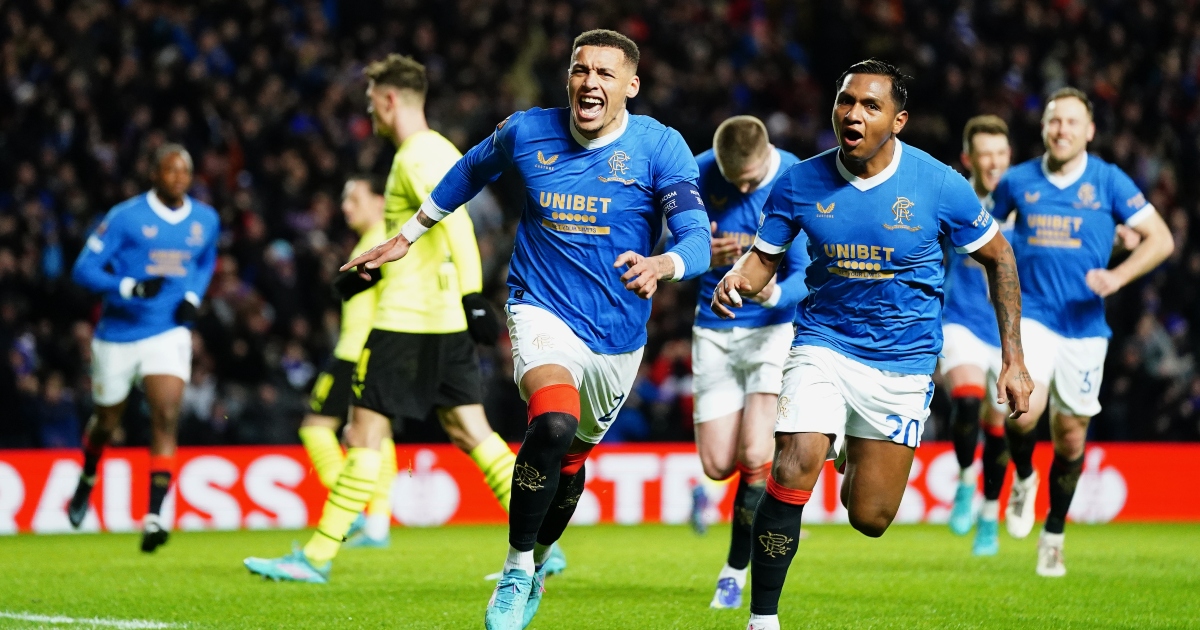 Rangers secured a famous European win over Borussia Dortmund and into the Europa League last 16 with a dramatic 6-4 aggregate win at Ibrox.

The Scottish champions stunned the Bundesliga outfit with a 4-2 win in the first leg of the knockout round play-off in Germany last week and the return game in Glasgow was equally pulsating.

Gers skipper James Tavernier scored from the spot in the 22nd minute but goals from England international Jude Bellingham on the half-hour mark and striker Donyell Malan had the super-charged Bundesliga visitors ahead at the interval.

Tavernier turned anxiety back to joy when he levelled in the 57th minute and Rangers tightened up in the nervy second half where Ryan Kent had a ‘goal’ chopped off through VAR but at the end of a frenetic night the Light Blues fans celebrated one of the finest European outcomes in the club’s history.

It was all set up for one of the great Euro nights in Govan but there was always the chance of things going wrong, given the level of opposition.

Dortmund went into the game on the back of a morale-boosting 6-0 win over Borussia Monchengladbach on Sunday but star striker Erling Haaland was again missing with an abductor problem.

From the side which lost in the first leg, Emre Can, Thomas Meunier, Nico Schulz and Thorgan Hazard came back in while Giovanni Van Bronckhorst named the same Gers team that started in Dortmund.

Before the game dozens of travelling fans spilled on to the pitch and had to be restrained back into their section by police and stewards, adding a sense of menace to the night.

On the pitch, as boss Marco Rose promised, the visitors attacked and as Dortmund swarmed all over the home side the Gers goal survived early scares with an effort from Bellingham hitting a post before the ball was eventually cleared.

Respite came from a rare foray when Gers winger Kent was tripped just inside the box by Julian Brandt, referee Antonio Miguel Mateu Lahoz pointing to the spot.

Ibrox erupted when Tavernier slammed the penalty high past keeper Gregor Kobel, beating him again from 12 yards as he had last week.

Moments later, as Dortmund came storming back, Brandt’s powerful drive from the edge of the box drew a terrific save from

Allan McGregor but the visitors were not to be denied and when Bellingham found himself with only the Rangers keeper to beat after a mistake by Connor Goldson and the English teenager stroked the ball past him with assurance.

The home side were still mostly defending but when midfielder Joe Aribo slipped in Scott Arfield on the break his shot from close range was parried by Kobel and Gers striker Alfredo Morelos blasted the rebound against defender Mats Hummels as Dortmund escaped.

However, there was no escape for Rangers when they were again pressed back into their own box with Malan getting a touch to a Bellingham flick to slide the ball past McGregor from 10 yards.

Leon Balogun replaced Borna Barisic for the start of the second-half where Morelos hit the side-netting with a drive before Kobel saved a decent effort.

However, again it was Tavernier who came up trumps when he flashed a deep cross from rampaging defender Calvin Bassey in from six yards.

Kent then had the ball in the net in the 67th minute from a Morelos pass on the break but after looking at his VAR monitor, the referee controversially ruled it out, judging a foul on Can by the Colombia striker.

Dortmund were throwing everything at Rangers and Kent then had a breakaway halted by the impressive speed of Schulz.

The game stretched and the home side enjoyed more positive possession but were happy to keep the scoreline as it was on what was a great night for Rangers and Scottish football.