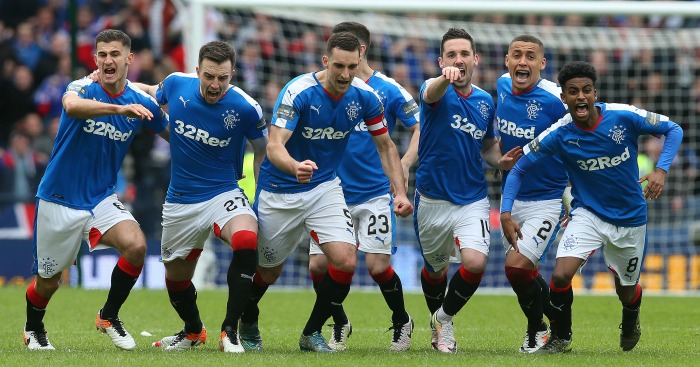 Last week Rangers claimed their second piece of silverware for the season, the Petrofac Training Cup (a Scottish Johnstone’s Paint Trophy), a trophy that has eluded them since their demotion to the bottom tier of Scottish football in 2012, despite having the second largest wage bill and budget in Scottish football. This weekend they beat Celtic on penalties to reach the final of the Scottish Cup.

* Europe – Celtic reached the group stages of the Champions League twice,  qualifying for the last 16 once. And also qualified for the knock-out stages of the Europa League last season.

* Players have been sold for massive amounts of money. Here are some players who were playing in Scotland and were sold to EPL or European clubs since 2012: Andy Robertson, Virgil Van Djik, Fraser Forster, Victor Wanyama, Gary Hooper, Joe Ledley, Adam Matthews, Ki Sung Yueng and Ryan Gauld.

* Two weeks ago the Scottish Premiership had the highest attendance per head of the population in European football.

* Celtic have only won the title only once before the split (that happens after 33 games) in four years. They won it six times before the split in their seven previous title victories with Rangers in the top flight.

Looking at the facts and playing devil’s advocate, maybe Rangers’ relegation was what saved Scottish football, not just for the top-tier clubs but for Rangers themselves. Their own attendances are up, they visited new grounds, their support are galvanised and they are no longer crippled with debt. It also gave the other Premiership teams the bit between their teeth to try and get some silverware and it paid off.

It will be a while until Rangers are competing for league titles. Their squad isn’t anywhere near as good as Celtic’s; Aberdeen are a lot stronger, as too are Hearts. But, with their support behind them and some solid investment they can be back challenging in a few seasons.

Is Rangers coming back to the Premiership a good thing for Scottish football? Of course it is.

Will Rangers coming back to Scottish football raise a bit of media attention? Of course it will.

Am I looking forward to Celtic and Rangers renewing old rivalries next season? Of course I am.

Are Rangers coming to save Scottish football? I think the other clubs have done a good enough job of that themselves…