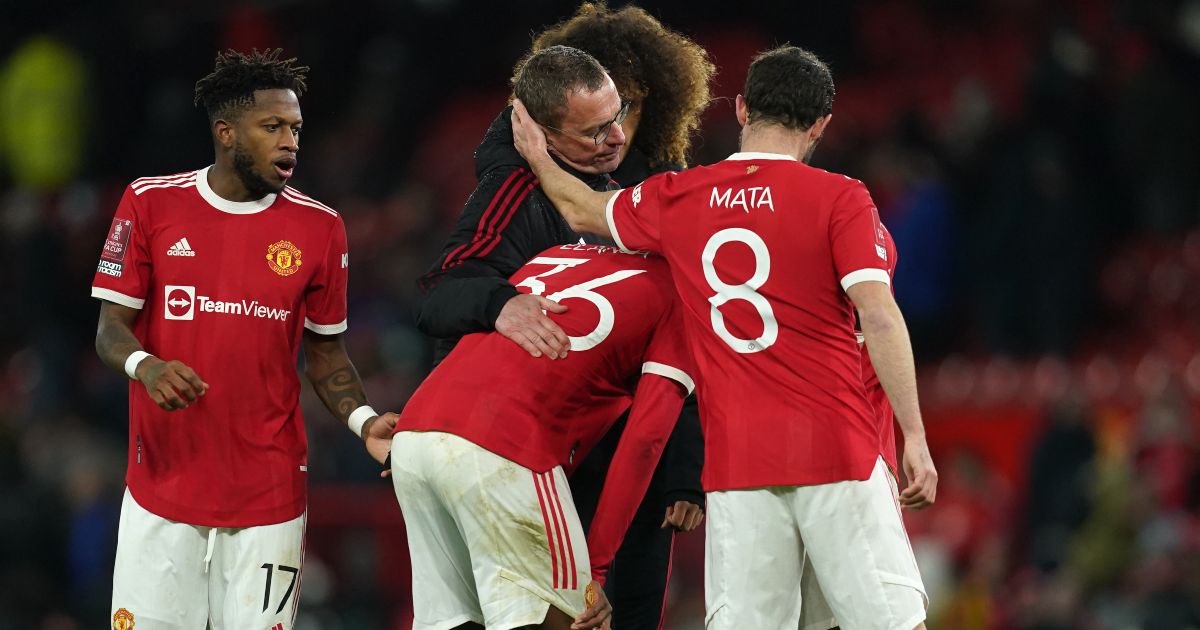 Ralf Rangnick has claimed that there are “two points of criticism” that Man Utd have to face despite “improved” performances.

The Red Devils moved up to fourth place in the Premier League before the recent break – but results have generally been better than displays under Rangnick.

There were rumours over the weekend that Mason Greenwood’s arrest has further divided the squad, while there have been reports that some of the Man Utd players are unhappy at Rangnick’s treatment of Jesse Lingard, who wanted to leave in January.

Donny van de Beek and Anthony Martial were a couple of main players who went out on loan to find football and Rangnick was asked whether the squad needed an overhaul following their FA Cup fourth round defeat to Middlesbrough.

Rangnick replied: “I don’t know. I don’t think so. Overall, the development of the team and performances over the last couple of weeks have improved. There are two points of criticism that we all have to face.

“One: we wasted too many clear-cut chances, 22 shots inside the box, 10 were massive opportunities and we should easily have been 3-0 up at HT. It should have been 6-1 or 6-2.

“And the other one was 10 secs before we conceded the goal, it was a perfect counter-pressing situation inside their half, we took away time but not the ball away from them and eight seconds later we were outnumbered in our box, it was a handball goal and I’m still convinced this goal should have been disallowed, but we shouldn’t have allowed this situation.

“Those are the two things I fault with the team. We invested a week into the game plan and many of those things have been confirmed by the team and were shown on the pitch against Middlesbrough.”

Raphael Varane, who joined Man Utd in the summer from Real Madrid, has had a number of fitness and injury issues this season but Rangnick says he is available for their match on Tuesday against Burnley.

Rangnick added: “I think he has arrived in the meantime, he seems to be physically fit, has no issues anymore with injuries, up until he was substituted he did extremely well with Harry against a Championship team but an ambitious Championship team.

“I’m very happy to have him for tomorrow’s game, hopefully, we can have him in the same form for the upcoming games.”