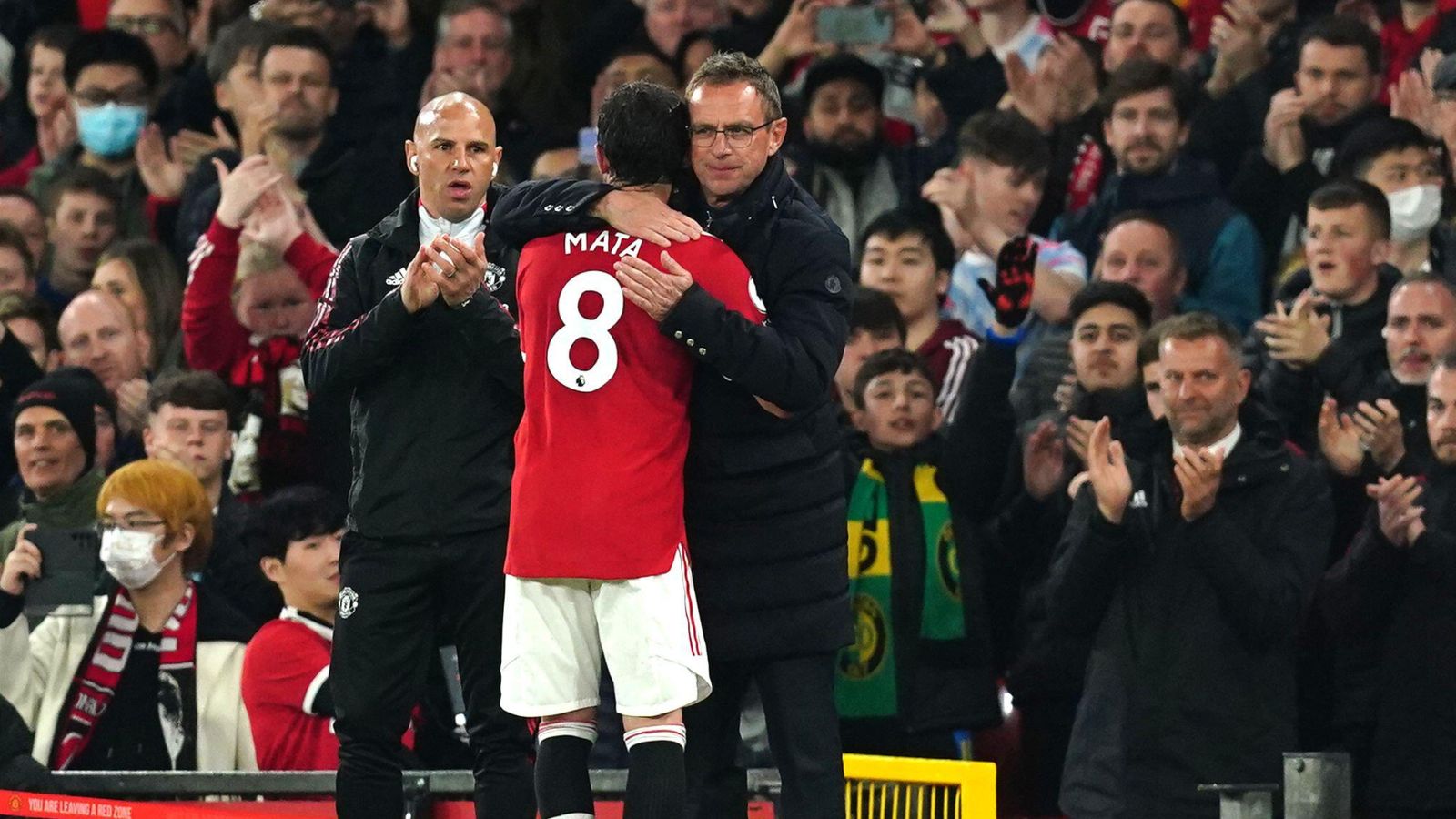 Ralf Rangnick praised his Manchester United players for their showing against Brentford, as it was one of their best “in the last six months”.

Fans showed their anger at the Glazer family as their team earned themselves a 3-0 win against Brentford at Old Trafford.

Bruno Fernandes, Cristiano Ronaldo and Raphael Varane netted for Man Utd on a rare night of joy for Rangnick.

The interim manager’s inability to get a consistent tune out of the squad means they are set to miss out on Champions League qualification and he admitted he was disappointed that they did not play like that more often.

“I think tonight we probably showed one of our best performances in the last six months in possession of the ball,” Rangnick said.

“We were in control of the game in most parts. We still had a few gaps defensively but in general I was pleased with the performance we showed tonight.

“The season is not yet over, we have another two games to play away at Brighton and Crystal Palace.

“We have to divide (my time) into different parts. We had very good games, very good performance to start with and in-between, the home games against West Ham, Tottenham, away at Leeds.

“But what we lacked in general was just consistency. At times we had problems to score goals. We scored three today, we scored four against Leeds.

“To start with it was important to stabilise the team and help them to concede not that many goals, but what was lacking was consistency.

“We also lost quite a few important players. This also didn’t help us.

“Obviously I am not completely happy with those six months. I would have expected us to qualify for Champions League. This was the goal that we had but in the end we were just not consistent enough.”

Rangnick admits he made a mistake in only handing Mata his first league start of the season on Monday – a night when fellow veteran Ronaldo shone in another man-of-the-match display.

The 37-year-old moved onto 18 league goals for the season and his future will be of keen interest this summer as Erik ten Hag prepares to take over.

“The way that he played again tonight, not only because he scored a goal, he also won the penalty, he also helped defensively tonight,” Rangnick said.

“So, why should he not be a player that could still be part of the squad and help the team?

“This is a question you have to ask Erik once he’s here and obviously it’s also important how Cristiano sees his role and his position.”

Our last game of the season at Old Trafford. All I can do is send my thanks as always to you – the United fans, you never stop supporting us even in many difficult days. In this moment lets finish the final two matches and all think positively for the new season 🔴 pic.twitter.com/tgtIeb9cgg

Brentford counterpart Frank left Old Trafford frustrated not to have done better against on song United.

“I am a bit disappointed because I think we could have performed even better, especially the first half,” he said.

“Actually I think we start fantastic, the first five minutes, then I felt United were more on top of the game without creating chance after chance.

“They had one top moment for the first goal so of course credit to them for that situation but we should have done better.

“They didn’t really create much but I know they were a bit on the ball first half.

“I felt that we lacked to be brave enough in the high pressure, we should be more aggressive and more cool on the ball. In spells we were too hectic.

“But OK, fair play to Man United. I think they hit a very high performance first half – some of their better performance that I have seen so far so they did well.

“Second half much more the Brentford team I want to see, much more front footed.

“We had momentum with chances and half chances and we were definitely on top and then we make a stupid mistake for the penalty, an unnecessary mistake and that of course killed the game off I would say.

“If you want to win here at Old Trafford, we can’t make a penalty and concede on a set piece.”