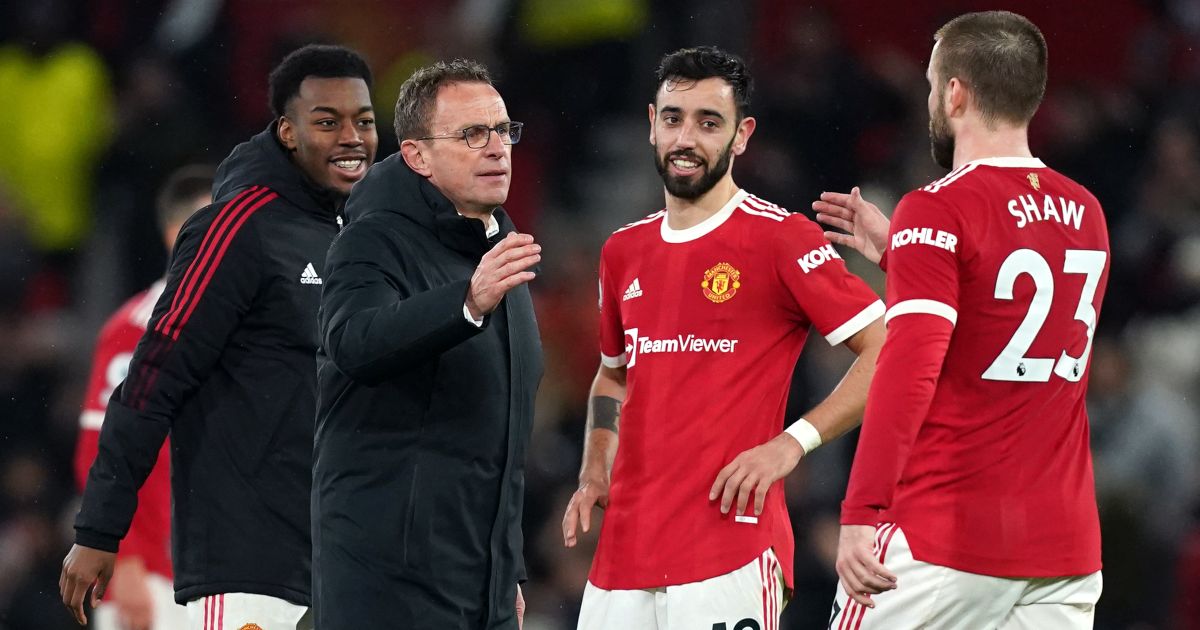 Man Utd boss Ralf Rangnick has revealed that he ordered Jadon Sancho and Anthony Elanga to attack Brighton’s centre-backs at half-time in their 2-0 win.

Having blown half-time leads to draw three straight matches in all competitions, the Red Devils desperately needed to put three points on the board at Old Trafford on Tuesday.

Brighton flew out of the blocks against the shaky hosts, who recovered from being jeered off at the break to seal a key victory as Ronaldo ended his six-game scoreless streak with a superb effort shortly after half-time.

Albion captain Lewis Dunk was sent off moments later before Bruno Fernandes scored in stoppage time to complete a 2-0 win that moved Man Utd up to fourth, albeit some sides below them have games in hand.

And Rangnick explained that their own full-backs had more space after he demanded Sancho and Elanga ran at Brighton’s centre-backs in the second half..

“We told our two wingers to attack the centre-backs so our full-backs could jump to their full-backs,” Rangnick told reporters after the match.

“That paid off with Elanga and the red card. We should have killed off the game much earlier. We were not lethal enough.

“First half was Mr Hyde, second half Dr Jekyll and for a change it (the result) was different. In the end it was important to get the three points against an in form team.

“Brighton are very possession based, full of confidence and we had to take more risks in the second half, it paid off.

“We scored the goal and got the red card for Lewis Dunk with a brilliant interception from Anthony Elanga. It should have been 3-0, 4-0 after 75 minutes but there is a bit of lack of assuredness in front of goal.

“We realised that they had too often possession of the ball and could only intercept in few situations. Should we change to a formation to back three? We decided to stick to 4-2-3-1 with more risk and it paid off.

“In the first 10 minutes of the second half we had more success moments and it raised the crowd, they were not moaning and were getting behind the team.

“I can understand if it feels to them like Brighton have 60% possession, that is not what they want to see.”