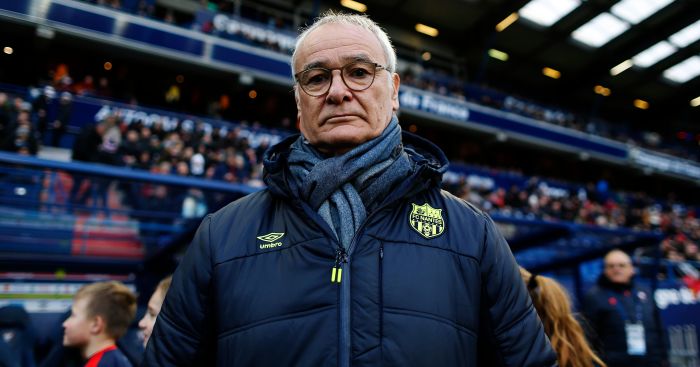 Claudio Ranieri has his sights set higher than mere Premier League survival following his return to management at Fulham.

Fulham chairman Shahid Khan announced via a statement on the club’s website on Wednesday morning that Slavisa Jokanovic had been sacked and replaced by Ranieri, who memorably led Leicester to the title in 2016.

The Italian has been given a “multi-year” contract as Fulham hope a change of manager will lift them off the bottom of the table, after Jokanovic managed just five points from 12 Premier League matches.

It is a disappointing return for a club who were among the Premier League’s highest spenders in the summer, shelling out approximately £100million to bolster their squad following promotion from the Championship via the play-offs.

Ranieri believes there is “exceptional talent” in the Fulham squad and he is already looking up the table ahead of what will be his first game in charge against fellow strugglers Southampton at Craven Cottage on November 24.

“It is an honour to accept Mr Khan’s invitation and opportunity to lead Fulham, a fantastic club with tradition and history,” said Ranieri, who has had a spell in charge of French Ligue 1 side Nantes since leaving Leicester in February 2017.

“The objective at Fulham should never be to merely survive in the Premier League. We must at all times be a difficult opponent and should expect to succeed.

“This Fulham squad has exceptional talent that is contrary to its position in the table. I know this team is very capable of better performances, which we will work on straight away as we prepare for Southampton at the Cottage.”

Ranieri gained his first experience of the Premier League at Fulham’s neighbours Chelsea, where he was in charge between 2000 and 2004, but it is the job he did at Leicester which will live in the memory.

The Italian overcame odds of 5,000-1 to steer the Foxes to the Premier League title, the only top-flight championship of his long managerial career.

Khan believes Ranieri’s experience and know-how about the Premier League made him the obvious candidate for the job.

“Making a change without having the right answer or succession plan was not an option, so having someone of Claudio’s calibre ready to accept our challenge was comforting but, most of all, essential,” said Khan.

“Claudio is risk-free and ready-made for the Premier League, and particularly so for what we need at this moment at Fulham.

“His recent body of work with Leicester City is literally legendary, and then you look at Claudio’s experience with Chelsea and big clubs throughout Europe, and it’s pretty evident we are welcoming an extraordinary football man to Fulham Football Club.”

Jokanovic became Fulham manager in December 2015 and led them to the Championship play-offs in two consecutive seasons, getting the club promoted back to the Premier League last term following a 1-0 win against Aston Villa at Wembley.

Khan thanked the 50-year-old for his work but insisted making a change was the “correct decision”, following six straight Premier League losses and seven defeats in a row in all competitions.

“I wasn’t anticipating having to make this announcement related to Slavisa and wish the circumstances were such that I didn’t have to, but our path this season has led me to make what I know is the correct decision, at the right time, for our players, the club and our supporters,” said Khan.

“Slavisa will always have my appreciation and respect for everything he did to return Fulham to top-flight football. I am hoping everyone in the Fulham family shares my heartfelt sentiments for Slavisa and joins me in wishing him success and good fortune, wherever his next stop may be.”

The Fulham Supporters’ Trust shares Khan’s gratitude but criticised the club for getting rid of Jokanovic just days after appearing to back him following the 2-0 defeat at Liverpool.

“The Fulham Supporters’ Trust are disappointed to see Slavisa Jokanovic leave the club, and want to put on record the thanks and appreciation of Fulham fans for the achievements under his close to three years as manager,” said the Trust’s chair Tom Greatrex in a statement.

“Earlier this week, the club stated their wish to see him succeed, and it will continue to be a matter of debate whether this dismissal has come too early.”