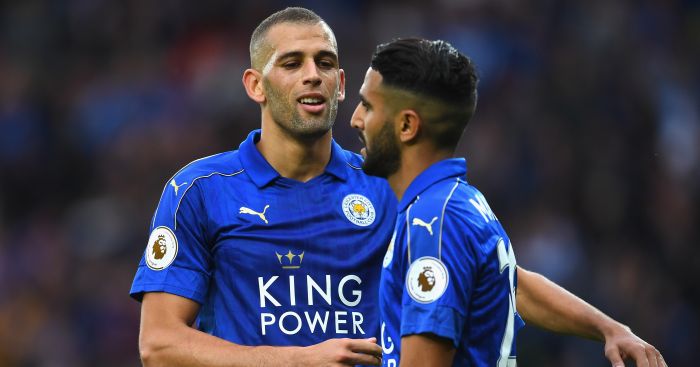 Mahrez then created the third goal when Ben Mee turned his cross into his own net as last season’s PFA Player of the Year turned on the style.

It capped a fine week for the Foxes after they beat Club Brugge 3-0 in their Champions League debut on Wednesday, when Mahrez scored twice, and Ranieri hailed the pair.

“It’s good for Slimani and good for everyone. It was a very good performance from him, as well as his team-mates,” he said.

“He linked very well with (Jamie) Vardy and the others and he pressed so hard during all the match. We bought him for these characteristics.

“Riyad made two fantastic performances, in Bruges and here, and I’m very pleased when he plays in this tactical way because he was very clever, when to attack, defend and play in between the lines.

TUNNEL CAM: The best of the action from inside the tunnel as #lcfc took on Burnley at King Power Stadium. #LeiBur pic.twitter.com/xTKXmbjJC0

Ranieri had told his players they could not blame their travels to Belgium for a poor performance and they delivered as Slimani scored either side of the break before Mee’s own goal with 13 minutes left.

Ron-Robert Zieler replaced Kasper Schmeichel, who was out with a concussion, and Danny Simpson returned from a hamstring injury in their only changes.

Victory also means the champions will go a year unbeaten at home in the league, with their last Premier League loss at the King Power Stadium coming in a 5-2 reverse against Arsenal last September – a run of 18 games.

Ranieri added: “I didn’t want to make many changes, just the keeper and right-back because I wanted to keep our momentum.

“It was important for us to win and 3-0 is good – now our focus is on the EFL Cup against Chelsea (on Tuesday). I’ll make changes because we have very good players and they can show me they are strong.

“I’m very pleased, it was important to win after the Champions League victory against a good, well-organised team. We tried to find a solution to score but they closed all the space. Then when we went wide and crossed they suffered a little more.”

Burnley have won just once in the league this season as their return to the top flight stutters, although they should have opened the scoring when Steven Defour headed straight at Zieler.

They offered little else going forward and boss Sean Dyche knows the Clarets paid the price for sloppy defending.

He said: “Unfortunately it was four minutes of madness, two minutes before and two minutes after half-time. After that they are a good side and they proved that.

“When you go 2-0 down and you’re playing the Premier League champions, it’s not impossible but it’s improbable that you come back from that. They get a bit more confident and their tails get up.

“You get punished for a lot of things at this level. The hardest challenge for me is trying to win games but also develop the players as well because there’s not many who have played an awful lot of Premier League football.”