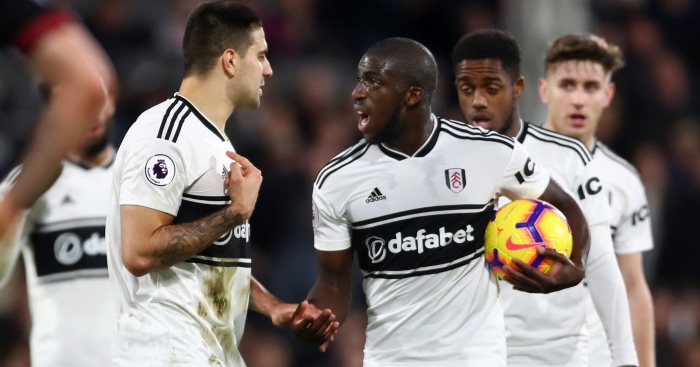 Claudio Ranieri says Fulham’s last-minute win over Huddersfield was a ‘dream’ result but the manager was left fuming by Aboubakar Kamara’s ‘unbelievable’ lack of respect.

Aleksandar Mitrovic scored a last-gasp winner to help the Cottagers climb another place after they moved off the bottom of the table on Boxing Day.

“It was unbelievable,” Ranieri told BBC Sport. “If we had to dream this match, it is important to score in the last minute and that is what we did. It was very important for the victory and the effort.

“The first half was very difficult but we could not go through the midfield and we lost a lot of balls. We did much better in the second half with Tom Cairney in the middle.”

Fulham looked to have blown their opportunity to seal three points when Kamara had his 83rd-minute penalty saved by Huddersfield keeper Jonas Lossl.

Kamara grabbed the ball after Chris Lowe was adjudged to have handled and he refused to give it Mitrovic, despite pleas from Ranieri and his Fulham team-mates.

“I said to Aboubakar Kamara to leave the ball to Aleksandar Mitrovic, he is the man who shoots the penalties,” explained Ranieri. “It is unbelievable, he did not respect me, the club, the team and crowd. I spoke with him, it is not right.

“I wanted to kill him, that is normal when one man takes a ball, only because he scored the last penalty (against Manchester United). It should be Mitrovic, that is it.”