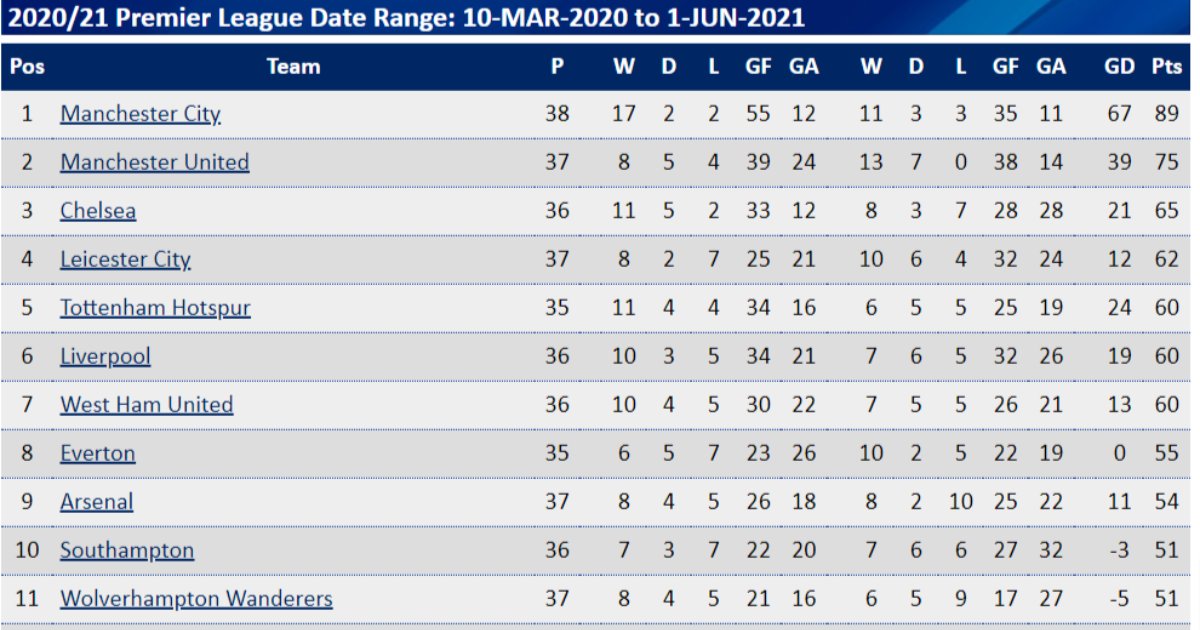 We have had a year of no fans – a neat 38 games for some clubs. So who has coped and who has curdled? We give you the rundown…

23) Norwich City (0 points)
They played nine Premier League games without fans and did not pick up a single point. In fact, they only scored one solitary celebration-less goal – against Watford in a 2-1 defeat. Thankfully, they look better equipped to survive this time around.

22) Watford (7 points)
They entered lockdown seemingly bound for survival after a ridiculous win over Liverpool, but just seven points in nine games under two managers was not enough for survival, when coupled with Aston Villa’s unexpected revival.

21) Bournemouth (7 points)
Nobody deserves to survive if they lose 4-1 at home to Newcastle.

20) West Brom (17 points)
The worst of the promoted clubs by some distance, the Baggies are on course for a pitiful 25 points this season. It’s difficult to argue that things would have been any different with fans.

19) Fulham (23 points)
Now ideally positioned to survive relegation as a team written off in November are now inexplicably better than Liverpool.

18) Sheffield United (25 points)
The first of the teams that has been a Premier League ever-present behind closed doors. They have been a disaster since the restart – 25 points from 38 games is Sunderland 2016/17 territory – and Chris Wilder is in no doubt that silence has not been golden.

“I can rattle off half a dozen negative football clubs in the top two divisions that players didn’t enjoy playing in front of and supporters didn’t enjoy watching,” said Wilder. “Our players love playing in front of the supporters at Bramall Lane and I’m sure they enjoyed our performances. I believe they played a huge part in turning losses into draws and draws into wins last season.”

17) Newcastle United (35 points)
And manager Steve Bruce heralded an “important point” when Newcastle drew 0-0 against the team in 20th last weekend. Which tells you exactly why we might reasonably expect them to be utterly screwed.

15) Crystal Palace (38 points)
More points away from home than at Selhurst Park, where the fans are a genuine miss for Palace. That’s just about survival form in most seasons; they dropped from 11th to 14th in the arduous closing stages of last season.

Selhurst Park a good example of the effect of no home fans. While Liverpool were superb Palace barely made a tackle in the second half. Wouldn’t have been allowed to just go through the motions with fans present.

14) Brighton (38 points)
Obviously they are about sixth on xG, but in real life, they are only above Palace on goal difference in this 12-month table. We don’t think they will go down but this is no kind of reward for their brand of easy-on-the-eye football.

13) Burnley (45 points)
Fans? No fans? Makes no odds as Burnley are exactly where you would expect them to be.

12) Aston Villa (50 points)
You expected them higher, didn’t you? It’s easy to forget that they actually endured six games without victory in Project Restart before a four-game unbeaten streak saw them survive by a single point. What is impressive is that they are conceding barely a goal a game. Would that have happened with fans?

11) Wolves (51 points)
It’s all gone just a little bit flat at Wolves, who have settled into life as a mid-table side who score just a goal a game and quite often none at all.

I can’t tell if football has become boring, or Wolves are boring. 🙁

10) Southampton (51 points)
Between June and the end of 2020, the Saints picked up 44 points from 25 games – the same as Frank Lampard’s Chelsea and better than Everton or Leicester City. It’s gone really quite badly since.

9) Arsenal (54 points)
Has the absence of the oft-poisonous Emirates crowd saved Mikel Arteta from any real pressure? It’s hard to believe that the Gunners were eight Premier League games unbeaten when football stopped.

8) Everton (55 points)
And just 23 of those 55 points have come at Goodison Park, where Everton have massively struggled without fans. Some of their performances there – most recently at home to Fulham – have been laughably atrocious.

7) West Ham (60 points)
Just don’t dare suggest that not having fans in the ground has actually helped West Ham this season. They get awful upset. What we can acknowledge is that they have made some tremendous signings, not least Craig Dawson, back from the dead.

Probably because there is zero substance behind it. Our best performance last season was on day of significant fan protests and our worst performance this season vs Newcastle at home was in an empty stadium – maybe check the facts first guys

6) Liverpool (60 points)
What we can all acknowledge is that the home form of the champions has been devastated by the lack of two things: Centre-halves and fans. They are one of the worst champions in Premier League history.

5) Tottenham Hotspur (60 points)
Lockdown football took Spurs from eighth to sixth last season and they have settled in seventh this season. Only Manchester City have conceded fewer goals over this year of silence and sometimes misery.

4) Leicester City (62 points)
Two wins in nine in Project Restart saw them drop out of the Champions League places but their recovery this season – in the face of unprecedented injuries – has been nothing short of phenomenal. A top-four finish this season would surpass all Brendan Rodgers’ other achievements in football.

3) Chelsea (65 points)
Seventh in this made-up league under Frank Lampard has become second under Thomas Tuchel. The only question is whether the Chelsea fans and their home-made posters would have delayed his crowning.

2) Manchester United (75 points)
Does this make them the kind of ‘good second’ that will be enough for Gary Neville and co? What we can conclude is that the gap between United’s home (29 points) and away form (46 points) might not be so stark with fans in the ground.

1) Manchester City (89 points)
Insert your own jokes here about City being used to playing without fans. Or simply marvel at the best team in England by a country mile (except when they are playing United).