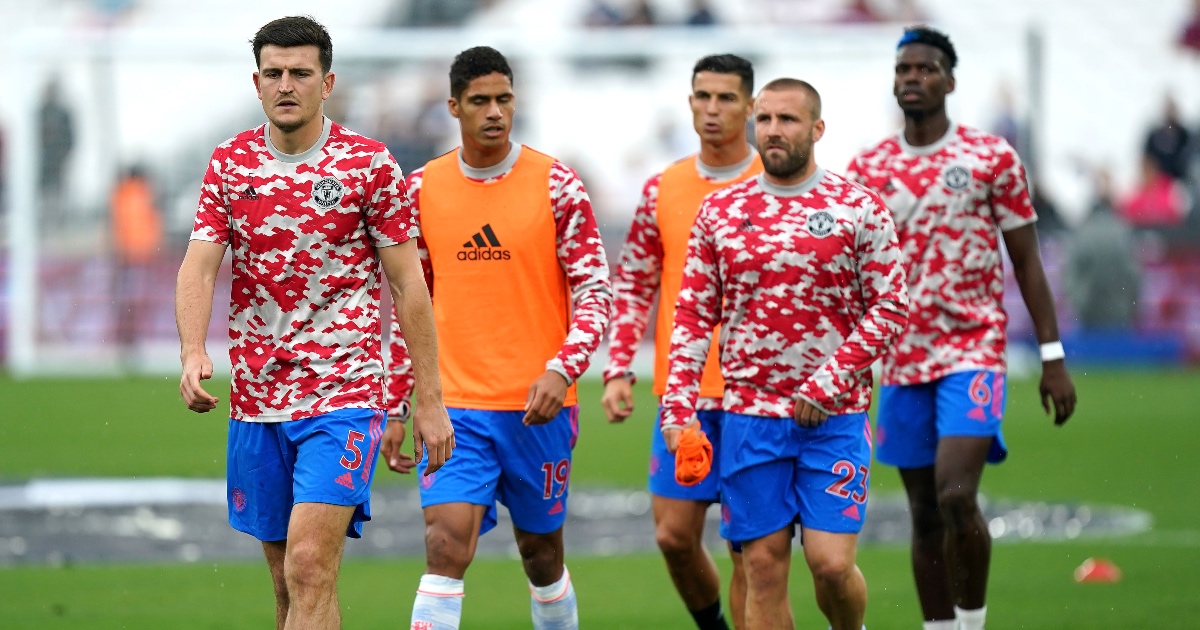 It’s all going tits up early doors for Ralf Rangnick.

Squad cliques, loan request denials, a shockingly bad defeat to Wolves and Cristiano Ronaldo – the players are p*ssed. We’ve ranked them by their right to gripe, from least to most.

29) Lee Grant
Fun though it would be if a 38-year-old footballer who hasn’t played a Premier League game in over four years to come out and say he wanted game time ahead of Manchester United’s best player, it’s simply not going to happen.

28) Tom Heaton
Fun though it would be if a 35-year-old footballer who hasn’t played a Premier League game in over two years to come out and say he wanted game time ahead of Manchester United’s best player, it’s simply not going to happen.

27) Cristiano Ronaldo
Essentially the reason for this ranking. Maguire et al. are annoyed by his ‘undroppable presence’ and that he holds ‘great influence’ over his teammates. Well, quite frankly, duh! He’s Cristiano Ronaldo. And that could quite easily be a description of how he’s driving Manchester United to the title. The man himself can have few gripes, with the captaincy presumably the latest stepping stone on his path to manager and director of football.

26) David de Gea
Appeared to take the brief question as to who should be No.1 personally and has been outstanding since. There is no doubt now.

25) Paul Pogba
Lit a match and threw it on the fire with his red card in the Liverpool mauling and has watched the club burn from afar ever since. We’re not for one moment suggesting Pogba wants to be out injured, but it was masterful timing. He will collect his extraordinary wage, play some beautiful passes, have one good game in five and leave for an even bigger wage packet in the summer.

24) Scott McTominay
From the midfield saviour one game to a man out of his depth the next. Will continue to start every game until United buy a midfielder to either confirm or deny whether McTominay’s actually any good or not.

23) Anthony Elanga
A full 90 minutes in the Champions League and a couple of Premier League substitute appearances under Rangnick. He can’t have expected more.

22) Jadon Sancho
He’s started all but one Premier League game under Rangnick and is yet to register a goal or an assist. Very, very fortunate to still be in the team.

21) Victor Lindelof
Suspected heart problems and a bout of coronavirus has kept him out for the last month, but he started Rangnick’s first two games in charge and both ended with a clean sheet. If Harry Maguire keeps getting all upset, Ronaldo could try out a Lindelof and Raphael Varane partnership.

20) Nemanja Matic
If Thiago Silva is the ‘Benjamin Button of football’, Nemanja Matic is not the Benjamin Button of football. The midfielder who’s been 35 for the last five years despite only being 33 must have feared the worst when the gegenpressing master arrived. Fortunately, Rangnick appears to have given up on all that running malarkey already.

18) Harry Maguire
Ronaldo is a ‘challenge to his expected role’ and he doesn’t like it. But his teammates resented his ‘premature promotion to captain’. So, equals-pequals? He’s still the club captain and puts on the armband whenever he’s fit. Stop complaining and lead the team – it’s an honour, FFS.

17) Raphael Varane
Slightly strangely left out of the starting XI against Burnley, but has started whenever else he’s been fit, which hasn’t been all that often. His gripe will be thinking he was signing for a team challenging for the Premier League.

16) Marcus Rashford
His performances don’t merit a place in the team but this formation really, really doesn’t suit him.

15) Anthony Martial
Wants to leave and will be allowed to if a suitable offer arrives. Fair enough.

14) Luke Shaw
He looked like he needed a big hug after the Wolves defeat. “We didn’t have many options on the ball and we weren’t on the front foot,” he said. Playing as a full-back with no wingers and leggy, slow defensive midfielders makes life incredibly difficult. He’s expected to play like a wing-back, with no-one to pass to and no-one to cover him.

13) Aaron Wan-Bissaka
We can barely imagine him saying anything, let alone airing any grievances, but he should be even more annoyed than Shaw. He is not an attacking full-back, but he’s trying his best, and then looks daft when he’s inevitably caught out of position as his teammates stand around watching him peg it back.

12) Bruno Fernandes
One goal and three assists in his last 14 Premier League outings is a very poor return by his standards, but looked really rather good when he came on and played in the hole behind Ronaldo and Edinson Cavani against Wolves – weird that. Saying so would be madness given they’re both club and international teammates, but if anyone has been negatively affected by Ronaldo’s presence, it’s Bruno.

11) Edinson Cavani
Proved he can play alongside Ronaldo with that wonderful goal against Spurs, but he’s been grumbling about the Portuguese star too, apparently. Would clearly quite like to leave in January, but Rangnick won’t let him.

10) Eric Bailly
Phil Jones’ excellent return against Wolves is not good news for Bailly, who may well now have dropped another notch down the centre-back pecking order. Probably feels he deserves more opportunity, but probably just isn’t good enough.

9) Alex Telles
He was pretty damn good in Shaw’s absence, isn’t as good as good as Shaw, but is probably more suited to this system. Would be playing if he was right-footed.

8) Amad Diallo
He’s wasted half a season of his career and needs a loan move in January.

7) Mason Greenwood
Getting so annoyed by the greatest goalscorer of all time shooting instead of passing to him is funny, ballsy and valid. Ronaldo was predicted to be more of a problem than a solution for United; the biggest problem would be his presence leading to Greenwood’s exit. They have to side with Greenwood.

6) Juan Mata
The poor guy’s been at Manchester United for eight seasons and should have left after four – such a waste of a wonderfully talented playmaker.

5) Fred
He scored a brilliant goal to win Rangnick’s first game in charge against Crystal Palace, was Man of the Match in that one and United’s best outfield player in the subsequent win over Norwich. He was then hauled off at half-time in the draw with Newcastle despite ranking first for successful passes, ball recoveries and chances created. He’s played one minute since and we have absolutely no idea why. Rangnick is leaving the only pressing footballer he has on his roster out of the team – baffling.

4) Dean Henderson
He’s now been back at Old Trafford for 18 months and probably expected to be No.1 by now, but he’s got less chance now than he did when he initially returned. Rangnick is understandably unwilling to sanction a January loan move – if De Gea gets injured, he will need him. But not playing football at United and not being allowed to play elsewhere must be pretty irritating.

3) Jesse Lingard
Lingard doesn’t seem like the sort of guy to get angry, so we’ll do it for him. Why the shuddering f*** is he still at Manchester United? He should probably be playing for Manchester United. Want someone to press the ball? There he is. But if you don’t fancy him, for whatever reason, fine. But don’t waste his career and deny us the joy of watching him play.

2) Donny van de Beek
He must be sick of being asked to work hard – what’s the point if he’s not given a chance? Just let him leave, the poor bas*ard.

1) Phil Jones
The applause shifted from ironic to genuine pretty quickly against Wolves – what a performance. Having not made a first-team appearance in two years, Jones has perhaps the greatest right to gripe of any Manchester United player ever.