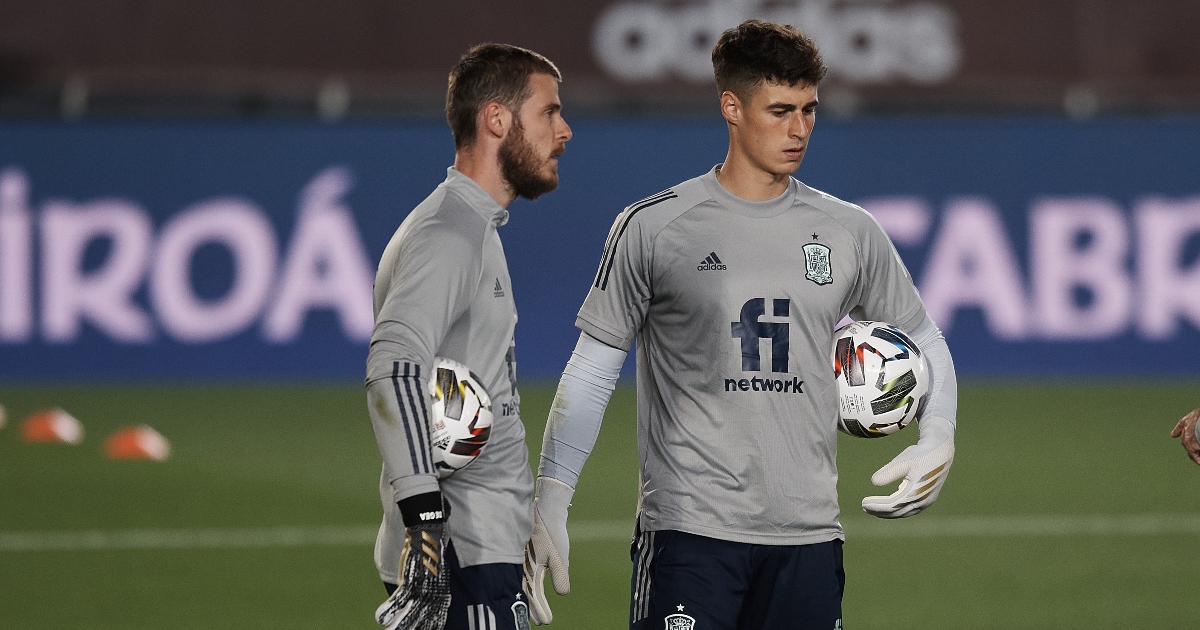 The importance of a solid No.2 should not be understated, especially for clubs in the richest league in world football. However, it would seem that the Premier League’s finest prefer to skimp on bench-warming goalkeepers instead of giving themselves some extra insurance…

20) Runar Alex Runarsson (Arsenal)
Alex Runarsson joined the Gunners in the summer of 2020 for around £2m. It was a move that raised plenty of eyebrows due to his horrendous record in both France and Denmark. He conceded 102 goals in 62 matches for FC Nordsjaelland and 78 in 45 for Dijon. He made six appearances in his maiden season in England, conceding seven goals. He should never make another.

Recommended by goalkeeping coach Inaki Cana, it is no wonder Arsenal fans were so angry about the potential signing of Aaron Ramsdale when Cana was driving their recent bids for the Bladesman. Having said that, if Ramsdale came in as a back-up for Bernd Leno, the north Londoners would certainly shoot up a good few places in this list.

If there is any justification needed for this selection, just take a look at his howler against Manchester City in last year’s Carabao Cup…

19) Patrik Gunnarsson (Brentford)
No, there is not an anti-Iceland agenda on F365 (it’s our favourite frozen food store); this list just happens to rank two Icelandic goalkeepers as the worst No.2s in the Premier League.

The 20-year-old only has one Brentford appearance to his name and spent the 20/21 campaign on loan at Silkeborg in Denmark’s second tier. He kept a very respectable 14 clean sheets in 26 matches.

Gunnarsson is one of two goalkeepers in the Bees’ first-team squad and is unlikely to worry David Raya when it comes to his starting spot.

18) Jason Steele (Brighton)
Steele joined Brighton on a free transfer from Sunderland in 2019 and has amassed a grant total of five appearances for the Seagulls.

The Englishman is yet to make a Premier League appearance in his career, and at 30 years of age, he would come in for Robert Sanchez if he suffers an injury this season.

Brighton recently signed Kjell Scherpen from Ajax for £4.5m and he will probably take Steele’s seat on the bench in good time, but the 6’8″ shot-stopper is currently injured and will miss several weeks, according to The Athletic.

17) Kristoffer Klaesson (Leeds United)
Signed from Valerenga in Norway to provide competition for Illan Meslier, Klaesson is a promising ‘keeper that will likely gain some experience in the domestic cup competitions this season for Leeds.

He has only managed two clean sheets in 14 league appearances in 2021, but at only 20, there is certainly room for improvement.

Klaesson has pulled off some fine reflex saves in the Norwegian top flight and has 38 youth appearances for his nation.

The Villans have went through their fair share of goalkeepers in recent seasons, including Pepe Reina, Lovre Kalinic and Tom Heaton, but this season it’s just Emi Martinez and Steer in the first-team squad as things stand.

Villa fans will remember him best for his penalty heroics in 2019 as Dean Smith’s side beat West Brom in a shoot-out to reach the 2019 Championship play-off final.

15) Jack Butland (Crystal Palace)
Once an England international, the future looked incredibly bright for Butland before Stoke City’s relegation in 2018. It’s not quite going to plan now…

His form dipped dramatically in the Championship, he lost his place in the England team and he was dropped by Stoke in 2019.

A move to Palace at the end of the 19/20 campaign put an end to a traumatic time in the second tier. Unfortunately, it is hard to see Butland being a No.1 for Premier League side any time soon.

Crystal Palace negativity is only for the neutrals

14) Adrian (Liverpool)
It wouldn’t be surprising if Liverpool fans expected to see Adrian lower in this list, but 14th seems about right for the Spaniard.

A very respected ‘keeper during his time at West Ham, the 34-year-old is undoubtedly past his prime and best known for making errors and being beaten too easily.

He’s not the worst option, but Reds fans will still keep their fingers crossed all season that Alisson stays injury-free.

13) John Ruddy (Wolves)
Capped once by England, Ruddy has been playing second-fiddle to one Portuguese or another at Molineux since the club’s promotion in 2019.

He played every single minute in the 18/19 Championship season until the very last day as Wolves won the title.

Ruddy has had a good career but is without doubt past his best. Having said that, the 34-year-old is a handy player to have in the squad and can certainly help the young ‘keepers at the club improve.

12) Angus Gunn (Norwich City)
Gunn re-joined Norwich this summer from Southampton for around £5m after spending the 17/18 season on loan at Carrow Road. He made 15 appearances last season for Stoke, conceding 21 goals in the process.

The 25-year-old’s last Premier League appearance was in the Saints’ 9-0 home defeat to Leicester City. Let’s just pretend that didn’t happen and say that 12th place on this list is absolutely fine.

11) Fraser Forster (Southampton)
Forster enjoyed his most successful spell at Celtic, spending two seasons on loan at Parkhead before making the move permanent in 2013. Two excellent seasons in Scotland earned him an £11m move to Southampton.

The 33-year-old has a great deal of experience and is an underrated shot-stopper. However, it’s his footwork that has let him down over the years.

Another No.2 who is simply past his best, he played in every match during the Saints’ FA Cup run last season. Forster only conceded one goal in five matches in the competition but that one goal, unfortunately, knocked his side out in the semi-final.

Hennessey is a decent ‘keeper with a lot of experience (that word again) and should put some pressure on Pope.

The Welshman joined from Palace this summer after eight years with the Londoners and is “a top-class goalkeeper and a great professional” according to Burnley’s goalkeeping coach Billy Mercer.

The Bosnian won the Premier League title in 2017 with Chelsea and made 45 appearances last season as Bournemouth reached the Championship play-off semi-final.

Once an excellent ‘keeper for Stoke during their glory days in the top flight, he has declined a fair bit but still offers some comfort for Everton fans if Pickford is unavailable, or doing Pickford things that force Rafa Benitez to drop him.

8) Danny Ward (Leicester City)
Ward’s solid Euro 2020 campaign has helped his case a great deal here. Wales finished second in Group A before being thumped by Denmark in the first knockout round.

The 28-year-old joined from Liverpool for £12m in 2018 and has not really been given the opportunity to justify his price tag.

He is unlikely to break into the Foxes first team as Kasper Schmeichel is probably the first name on Brendan Rodgers’ team sheet, literally and metaphorically.

7) Kepa Arrizabalaga (Chelsea)
The man of the moment; Kepa was the hero on Wednesday night as Chelsea beat Villarreal in the UEFA Super Cup 6-5 on penalties.

Kepa came on in the 119th minute of the tie and saved two spot-kicks. You’re as good as your last match, right?

Seventh is perhaps generous considering his form in recent seasons, not to mention his ridiculous £72m price tag – but the 26-year-old still has time to turn it around and is not a bad back-up option for Edouard Mendy.

6) Karl Darlow/Freddie Woodman (Newcastle United)
The goalkeeper situation at St James’ Park is a messy one at the minute. No.1 Martin Dubravka is injured and Darlow had Covid and is nowhere to be seen, so Woodman will likely start their Premier League opener against West Ham.

Darlow has been second choice for the majority of his Newcastle career and did a decent job last season when deputising for the injured Dubravka.

Woodman kept the most clean sheets in the Championship last season and could perhaps become Steve Bruce’s No.1 this season. Who knows? It doesn’t matter because whoever will be No.2 out of the three would occupy the No. 6 spot here.

5) Zack Steffen (Manchester City)
Steffen has the amazing job of being City’s domestic cup goalkeeper. It is hard to judge him due to the luxury of his position, but he looks like a handy ‘keeper.

Being better with your feet than your hands is probably more important under Pep Guardiola, but the 26-year-old is good enough at both.

He has looked solid so far, but if Ederson gets injured he will probably get exposed and we’ll look as stupid for this ranking as we will for our predictions for the 21/22 season.

4) Ben Foster (Watford)
Foster has had a great career in the Premier League. An excellent shot-stopper, an ultimate sh*thouse and a terrific cyclist.

It seems strange to put a goalkeeper who was back-up in the Championship last term so high on this list, but he is still a good ‘keeper.

The 38-year-old lost his starting spot in January with Daniel Bachmann coming in and taking his chance, keeping 13 clean sheets in 23 league matches.

3) Lukasz Fabianksi (West Ham)
The signing of Alphonse Areola on loan from Paris Saint-Germain should bench Fabianski after being first choice for both West Ham and Swansea City since 2014.

After a difficult time at Arsenal, the Polish shot-stopper proved his worth during his time with the Swans. Swooped up by the Hammers after the Welsh club were relegated, he has been one of their most important players in recent years.

It is likely that he will play in the domestic cup competitions and maybe the Europa League. Once again, this could be way off with Areola being the man to occupy the bench this season.

A terrific shot-stopper and perhaps unlucky to not be top of this list, the Italian was excellent for the Serie A club last season and will surely up Lloris’ game.

Spurs have the option to sign Gollini on a permanent deal next summer, and if he transfers his Atalanta form over to England, it will be a no-brainer.

1) David De Gea (Manchester United)
Likely to be second choice this season, De Gea lost his place in the United team last term in the Premier League and could not win his place back from Dean Henderson. He then had that penalty shoot-out. Also back-up for the Spain national team, the 30-year-old is in a tough spot in his career.

But De Gea saved United year after year and is determined to be Ole Gunnar Solskjaer‘s No.1 again. He will need to take his chance whenever it is offered, and it could come as early as this weekend as Henderson recovers from Covid.

There is still a decent ‘keeper in there and he just about deserves to be No.1 in this list, if not in United’s actual team.