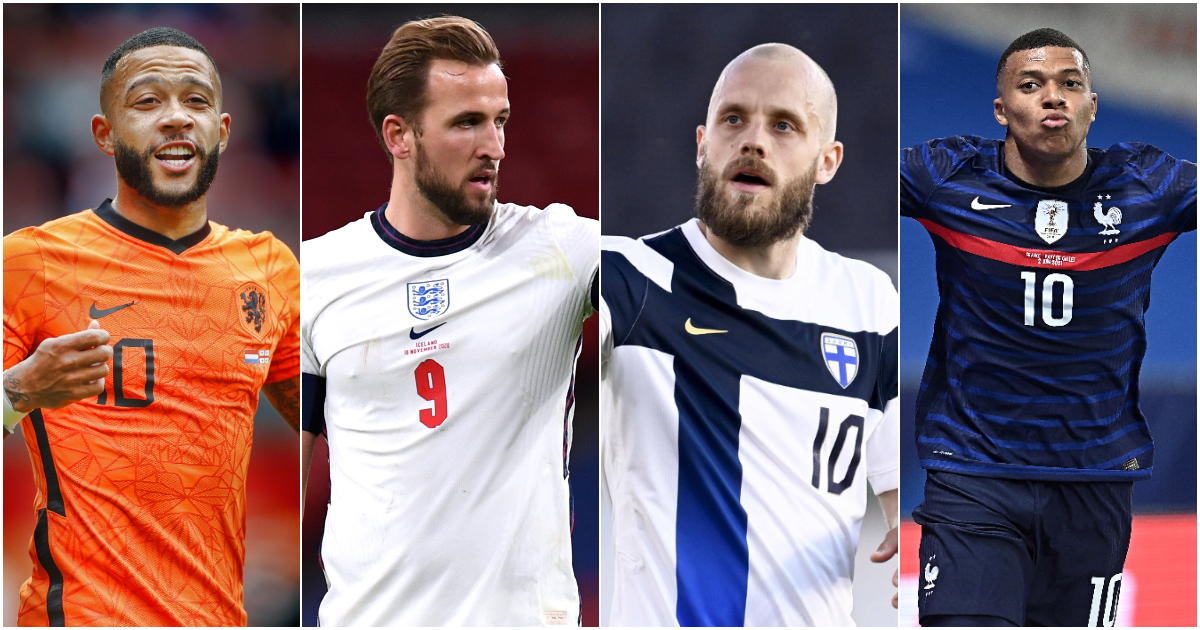 Some teams made such a mess of their Euro 2020 kits that they’ve had to go back to old ones. Some have stuck with terrible ones. Some have done lovely work. Some got the country’s flag wrong. Some might yet trigger World War Three. There’s quite a lot to process in this year’s Euros kits.

Anyway, here are the rankings for you to disagree with. Especially Portugal, but it’s bad and everyone else is wrong.

24) Portugal
Really not sure about this. Looks a bit shapeless even on Cristiano and it’s just not quite the right colour, is it? It’s too red. Dare we say it, too Spain. Wolves had a better Portugal shirt than this for their third kit last season. And while gold trim and detailing absolutely can work, it doesn’t here. It’s not a good showing for the defending champions.

23) Spain
That chunky adidas collar and a weird pattern. It almost looks pixelated, like someone accidentally zoomed right in on a small portion of the shirt before sending it off to the printer and then just decided to style it out upon realisation of their harrowing error.

22) Scotland
Something has gone wrong here on a shirt that should be almost impossible to balls up. The very dark blue is pleasing, but look closer. First of all, how’s that red got on the cuffs there? Second, why are there bleached hoops all down it? Looks like something’s gone amiss in the wash, and that’s before we even get on to the wider potential problems of putting hoops on a Scotland shirt.

21) Belgium
The first shirt featuring the Belgian FA’s smart new stylised logo, and it’s therefore a bit disappointing to see that rather lost when plonked atop what appears to be a great big letter B that some joker has daubed across the front of the shirt. We reckon it stands for Belgium. A real overcomplication and missed opportunity. This was one occasion where simplicity was undoubtedly the way forward; make that (no doubt expensive) new logo the focal point. A shame.

20) Russia
At one point looked sure to be the most controversial shirt of the Championships because the initial version released had blue and white bands on the cuffs but the order of the colours coming off the red of the shirt made it resemble a Serbian flag rather than Russian one. Hastily redesigned with just big chunky plain white cuffs, it is undoubtedly now less controversial but also a bit sh*tter. Cuffs that wide almost demand a two-tone approach, and to hell with the political ramifications.

19) Germany
The colours of the national flag on the big wide cuffs are wonderful, but the horizontal pinstripes (pinhoops?) are as big a disaster as Die Mannschaft’s 2018 World Cup effort. Very, very, very rare misfire from the normally stereotypically reliable adidas/Germany combo. Based on no evidence, we’re going to go ahead and claim there is no chance they would suffer this kind of kit-based calamity if they weren’t panicking about the collapse of their on-field performances. It’s just too much of a coincidence.

18) Italy
The ‘fun all-over graphic’ that has been ‘tonally incorporated’ into this kit is inspired by the culture-defining Renaissance era, it says here, and reinterprets luxurious patterns of the past. The players will look great in it, because the Italians always do, don’t they? But to us it looks a lot like some curtains and we’d have preferred white rather than navy for the collar and trim.

17) Switzerland
They turn up to every major tournament and never really do all that much for you to remember them by. In that sense, this kit is apt.

16) Ukraine
At first glance, it’s an okay shirt. But it’s also a shirt that could start World War Three and, frankly, we’ve all had enough drama and stress in the last 18 months without Ukraine riling Russia up by including contested peninsulas in the design of their shirts. You have to admire the shithousery, but the epicness of the bantz is going to be small consolation when the nukes start flying and our eyeballs are melting in our skulls. Sadly, therefore, Ukraine score poorly in this round.

15) Austria
While Denmark have a lovely and slightly mind-bending glimpse of what an Arsenal kit might look like if it were made by hummel (answer: magnificent) this one just literally is an old Arsenal shirt Puma had knocking around from about 2017, isn’t it? Whack a cannon and the word Emirates on it and job done. Lazy.

14) Czech Republic
The geometric pattern on this is actually quite nice, but you have to stare right at it to see it and without it you’re just left with a very plain top.

13) Slovakia
It’s normally white for Slovakia’s home shirt, but everyone seems to be in agreement that this eye-catching two-tone blue number is in fact their ‘home’ shirt for the Euros. Even allowing for the colour issue, it has the look and feel of an away shirt with its risk-taking and experimentation. Kind of works, though. Still think it’s the away shirt. Time will tell.

12) Wales
Has the chunky v-neck collar adidas template familiar to anyone who watched any football last season. We’re still not sold on it, but the big chunky gold, green, red and white cuffs are an absolute winner and you are already a step ahead of the rest if your badge is literally a big bastard dragon.

12) Hungary
Another adidas one where it looks like something unexpected has happened in the wash. The spray-paintish hoops are supposed to represent the Danube, according to the manufacturers, which sounds like bumwash. Don’t hate it, though.

10) Sweden
That big adidas collar we’ve complained about so much actually works like a charm in the Sweden colourway. The darkness of the navy is maybe not quite the right colour if we’re sticking rigidly to the colouring of the flag, but it’s absolutely the right colour to tie this shirt together. The best of this adidas template by a margin wider than its cuffs.

9) North Macedonia
Did release a new burgundy home kit, but everyone hated it so much they’ve gone back to the old one. Good move too, because it’s a cracker with its vibrant red and sunburst flowing out from behind the badge. If it ain’t broke, don’t fix it. Or if you do, at least have the guts to admit you f***ed up and undo the damage. A lesson for all of us there, I think.

After the uproar over the new maroon/burgundy jersey, FFM has backtracked and will go back to the old jerseys for EURO 2020.

Muamed Sejdini, the FFM president, posted the below message on his Facebook which was then picked up by the official facebook page of FFM. pic.twitter.com/NLHhx6tebP

8) Turkey
Very clean, very smart and that big, bold red band around the tits screams success. The crescent moon and star emblem from the flag is just as big and just as bold. Look how it stands out there. Marvellous. This is an absolute winner. A strong showing from the Group A dark horses. Has ‘Turkiyem’ printed inside the collar which means ‘My Turkey’ and fair enough. The matching tracksuit top is also smashing, if you’re that way inclined.

7) Poland
Nike making an unashamed play for the casualwear market with this one and, fair play, they’ve pulled it off in some style. The big retro eagle crest sits in the middle of the shirt looking all splendid and the red trim on the collar and cuffs pulls things together very nicely indeed.

6) England
This is very good. You take a risk with a round collar on a white shirt. Do too little, and you’ve essentially just got a very expensive white T-shirt. Do too much and you can make a mess of something that should be clean and simple. Nike hit the sweet spot here, and that thin red stripe within the navy collar is the absolute key to the whole enterprise. The central badge and Nike swoosh also work well on a kit that somehow manages to look modern while also evoking memories of Euro 88, where England’s kit was very much the best thing about them. It is Nike’s best England kit yet and also – not unrelated – the one that is somehow most Umbro.

5) Croatia
They’ve done it again. Perfection, as always. If there were any justice in the world, whichever genius it was who first said “What if we made our kit match that red-and-white checkerboard from the national crest?” would be the richest man or woman on earth. The checks on this one are absolutely massive and our only word of warning is that this is the absolute ceiling limit for check size before they manage to ruin it.

4) Finland
They’ve taken a gamble, it’s paid off, and you absolutely love to see it. After a succession of unremarkable white-shirts-with-blue-trim, Finland have torn up the rulebook and just made their shirt a ruddy great big flag. Initial shudders at how unspeakably awful it would be if England did this soon subside when presented with this beauty. There are a few lovely details that elevate an already excellent shirt. The subtly striking gold trim; the fade of the blue which works so much better across a small area like this than when Spurs and Man United tried to do it across the whole damned thing a couple of years back; the offset numbers on the front of the shirt sitting below the badge and balancing the whole thing out quite splendidly. Punching way above their weight here, are the Finns.

3) Netherlands
Yes please. The Dutch lion fashioned from all triangles and rhombuses and such emblazoned across the front of this looks absolutely mustard, and does just enough to evoke memories of that Euro 88 shirt without presumably running the risk of Nike getting sued by adidas. The lion looks old and wise and has a disarming kindness in his eyes. We want to learn from him.

2) Denmark
Wonderful, of course. Once you get over the initial visual confusion of seeing hummel – a brand that to those of us of a certain age will always be indelibly linked with Tottenham – produce what is in essence a really good Arsenal shirt. It makes the classic chevrons look incongruous at first, but you soon get over it and what you’re left with is another classic in the long line of hummel x Denmark loveliness.

What an amazing debut in the new @dbulandshold jersey… 🇩🇰⚽️👏

1) France
Absolutely taking the piss to have a team as good as they do and then put them in a kit as good as this. Genuinely raging about it. The nod to 1998 is both immediately clear yet also subtle enough not to be a lazy, slavish reproduction. The team to beat in every sense.