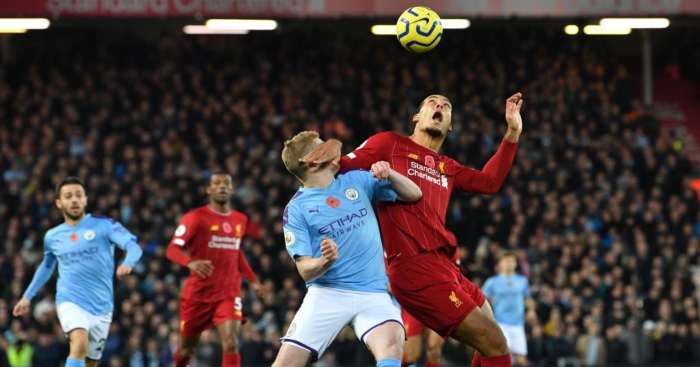 Arsenal whimpered to their sixth straight Premier League defeat at the hands of Manchester City on Wednesday. They’ve got an alarmingly poor record against the top sides. Here’s how all of the Big Six rank in terms of points against each other, from closest to most one-sided…

8=) Arsenal v Tottenham points over 9 games: Arsenal 11; Tottenham 11 (Even)
Spurs host Arsenal on July 12, with the north London derby set to be as tough to call as ever.

8=) Man Utd v Man City points over 10 games: Man Utd 14; Man City 14 (Even)
United’s wonderful victory over City in their last game before the break was perhaps billed as more remarkable than it deserved. They’ve done pretty well against City, as they have against most of the Big Six…

8=) Man City v Tottenham points over 10 games: Man City 14; Tottenham 14 (Even)
Steven Bergwijn’s wonderful strike in February gave Spurs their first Premier League win over City in their last six attempts, losing four of them. They also recorded their favourite loss ever in that time – 4-3 in the Champions League at the Etihad.

7=) Arsenal v Man Utd points over 10 games: Arsenal 15; Man Utd 12 (Arsenal +3)
Mikel Arteta’s first win as Arsenal boss on New Year’s Day is the difference, but the Spaniard has some questions to answer to rediscover that form.

7=) Liverpool v Man Utd points over 10 games: Liverpool 11; Man Utd 14 (Man Utd +3)
Jurgen Klopp’s side have won just two of their last 10 Premier League clashes – some solace for the Red Devils as they watch Liverpool lift the trophy in a couple of weeks.

7=) Man Utd v Tottenham points over 9 games: Man Utd 15; Tottenham 12 (Man Utd +3)
No draws in the last nine meetings. Paddy McNair and Nacer Chadli were battling it out when they last did – back in December 2014.

6) Chelsea v Man Utd points over 10 games: Chelsea 10; Man Utd 16 (Man Utd +4)
The Blues have won just one of the last seven meetings between the clubs, consistently unable to deal with anyone that can run even a little bit quickly.

5) Chelsea v Tottenham points over 10 games: Chelsea 17; Tottenham 11 (Chelsea +6)
Spurs have beaten Chelsea just six times in the history of the Premier League, with half of those victories coming in the last 10 games.

4=) Liverpool v Man City points over 9 games: Liverpool 17; Man City 8 (Liverpool +9)
A quite extraordinary advantage for Liverpool, given Manchester City’s superiority before this season. The Reds won 3-0 in March 2016 with a back four of Nathaniel Clyne, Dejan Lovren, Kolo Toure and Jon Flanagan.

4=) Liverpool v Chelsea points over 9 games: Liverpool 16; Chelsea 7 (Liverpool +9)
Despite decent performances against Liverpool in recent times, the Blues have won just once in the last nine Premier League games against the champions-elect.

4=) Chelsea v Man City points over 9 games: Chelsea 9; Man City 18 (Man City +9)
There have been no draws in the last nine games, with Martin Demichelis and Oscar in the line-ups when they last shared a point.

4=) Arsenal v Chelsea over 10 games: Arsenal 9; Chelsea 18 (Chelsea +9)
Arsenal have beaten Chelsea in the League Cup, FA Cup and Community Shield in the same time period, but were a shambles as they lost the Europa League final last season.

2) Arsenal v Liverpool points over 9 games: Arsenal 4; Liverpool 19 (Liverpool +15)
Arsenal have scored 13 goals in those nine games, but have only managed four draws. Liverpool have scored 26, which explains it.

1) Arsenal v Man City over 10 games: Arsenal 5; Man City 23 (Man City + 18)
Francis Coquelin was the midfield enforcer when the Gunners last won a point against Man City, and they haven’t found a better one since.