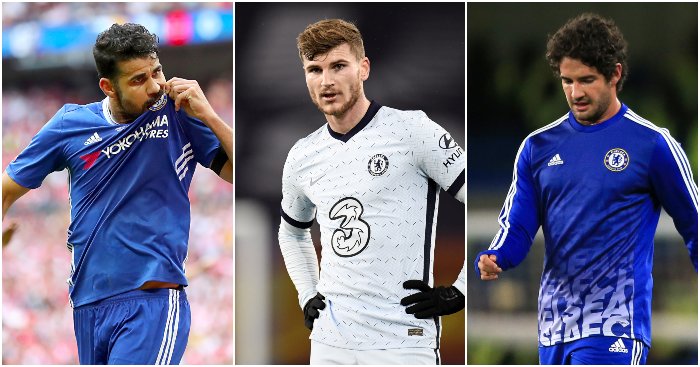 On May 22 2012, Chelsea announced on their official website that Didier Drogba would be leaving the club when his contract ran out at the end of June that year. A couple of months later, the Ivorian was putting in a shift in the Chinese Super League – playing alongside Nicolas Anelka for Shanghai Shenhua.

Thus ended an eight-year stay at Chelsea that included Premier League, FA Cup and Champions League wins, 100 goals and – in his departure – a gaping hole to be filled in Chelsea’s attacking line.

Almost nine years – and 230 million of Roman Abramovich’s oily pounds – later, the west London club are still yet to find a forward able to provide the longevity and consistency of Drogba.

We have ranked Chelsea’s far-ranging but often failed attempts to fill that hole, from the embarrassingly shit to the actually rather good.

12) Alexandre Pato
I used to buy Alex Pato on FIFA 12 manager mode. I’d take Ipswich out of the Championship (those were the days), spend a couple of seasons in the Premier League, then put in a £35million bid for the mercurial Brazilian. He served me well – he had a good understanding with Grant Leadbitter – but he was so, so awful when he played for Chelsea.

Signed from Corinthians on loan for the duration of the 2015/16 season, Pato made only two appearances for Chelsea, scoring one goal.

I would say it was a total waste of a year for everyone involved, but that would be ignoring the fact that it produced the greatest fan-cam tribute video made about a player that I have ever seen.

11) Radamel Falcao
2015/16 was not a year of successful loans for the Blues. Alongside Pato came Radamel Falcao on a season-long loan from Monaco.

Having been shipped out to Manchester United the previous season and spending a pretty innocuous time there (four goals in 26 appearances for United), it felt like the obvious thing to bring him down to Stamford Bridge, satiate his extortionate wage demands, and see if his luck would turn. It didn’t.

One goal in 10 appearances for Chelsea leaves him 11th on my list. Sorry, Radamel – maybe it’s a South American thing…

Mohamed Salah is the best worst footballer in the world.

He never seems to have control of the ball, can’t really kick it right, and brings his sleeves down over his hands like a cold child forced to play by his passionate – but slightly too passionate – dad-cum-manager; brought on for a plucky but ultimately ineffective ten-minute cameo at the end of every match.

This is all forgotten, of course, if you’re scoring goals for fun – like at Liverpool – but makes you look hopeless when you’re not.

£60million for someone who got booked for diving in an FA Cup third-round replay against Norwich and then sent off a minute later for dissent.

8) Gonzalo Higuain
Really very good at other clubs but ultimately failed at the Bridge? Hang on…I’m starting to see a pattern here.

What is it about myopic, ill-thought-out signings, based on the ever-changing philosophies and tactics adopted by a conveyor belt of managers fired and hired at the drop of a hat by a Russian oligarch that somehow inhibits the long-term growth of a club?

7) Timo Werner
Depending on how the next four months go, this is either unfair on Timo Werner or too kind, so I thought I’d stick him somewhere in the middle.

What will the German’s legacy be at the Bridge? Just as Chinese Premier Zhou Enlai said about the legacy of the French Revolution, it’s too early to say.

6) Loïc Rémy
Another talented forward whose time at the club slips into insignificance.

Not a failure but then certainly not a success, Remy felt like someone always on the verge of being really good, so sixth in a list of 12 seems about right. Certainly no Didier…

5) Michy Batshuayi
Batshuayi’s time at Chelsea has played out in fits and starts since the Belgian forward signed from Marseille in summer of 2016.

He’s only played a handful of games for Chels since 2018 following a spree of season-long loan moves, but his goal at West Brom to clinch the title for the Blues in May 2017 has secured his place near the top of the list.

4) Samuel Eto’o
He’d lost most of his pace that made him so electrifying at Barcelona and Inter Milan by the time he came to Chelsea, but nine goals in 21 appearances during the 2013/14 season isn’t a bad return.

3) Demba Ba
Like Batshuayi, Demba Ba’s career at Chelsea will be remembered for one specific moment: that goal against Liverpool.

As a staunch Gerrard-over-Lampardian I find it hard to watch that slip and subsequent finish even now, but still, Demba Ba was pretty good when he was at Chelsea.

Not as good as he was at Newcastle playing alongside Papiss Cisse, of course, but it’s a rule of thumb that Chelsea players are immediately less good than they once were just after the club pays big money for them.

Instead he’s just slow and beautiful – but that doesn’t stop him being effective.

Tall, wide, but with the first touch and skill of a man half his size, Giroud is the consummate target man. People thought his career was ailing when he headed across London to join the Blues from Arsenal, but since then he’s helped Chelsea to FA Cup and Europa League wins and bagged a World Cup winner’s medal to boot.

Perennially underrated, Giroud is just a really good footballer who keeps proving his doubters – and probably himself a little bit, too – wrong.

1) Diego Costa
It takes a shithouse to know a shithouse and when Jose Mourinho brought Diego Costa to Chelsea during his second spell at the club, it was a partnership destined for greatness.

The twat’s twat, between 2014 and 2017 the Spaniard dived, spat and kicked his way to being the most divisive player in the Premier League. The sort of guy you hate until he’s on your side getting the opposition sent off and scoring goals.

And score goals he did, a lot of them.

His partnership with fellow Spaniard Cesc Fabregas was magical and it was this combination that helped Chelsea to a fourth Premier League title in 2015.

In the 2016/17 season, and under Antonio Conte’s management, Costa’s 20 goals again drove Chelsea towards a title.

It was ultimately the breakdown in his relationship with the Italian that was Costa’s undoing at Chelsea and in September 2017, Costa returned to Spain to re-join Atletico Madrid – the club from which he’d joined the Blues.

Despite only spanning three seasons, the volume of goals that Costa scored at Chelsea and the success of the club during his time there, means he has to be their greatest forward at Stamford Bridge in the post-Drogba era.