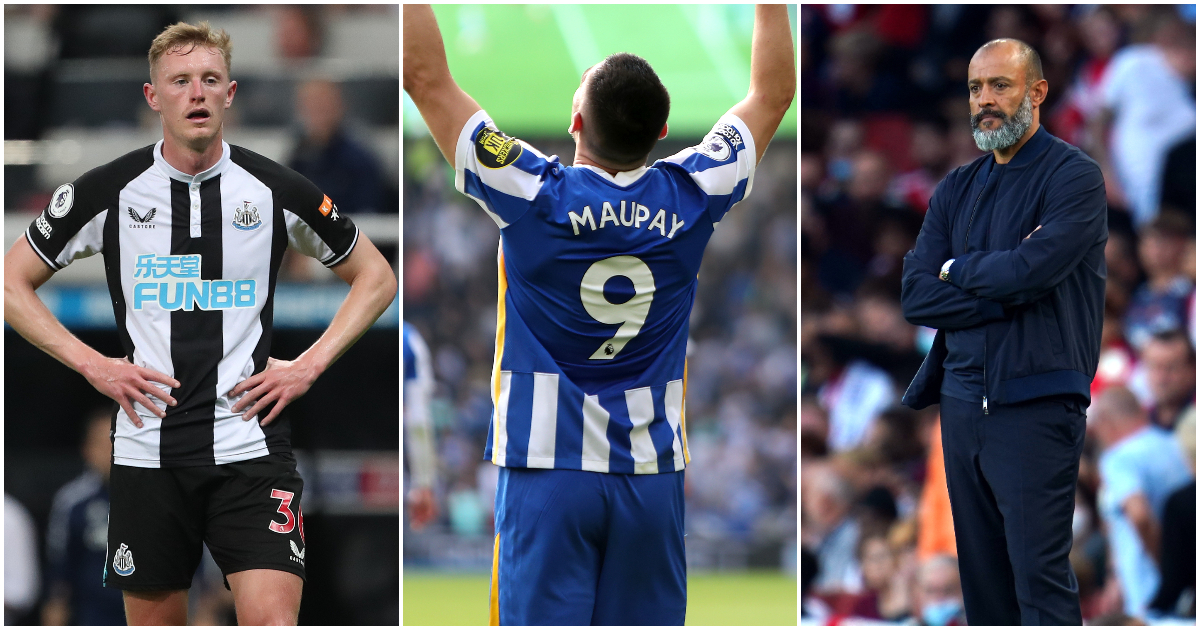 We had a crack at nailing down the prevailing mood across the Premier League’s 20 clubs in July, and now seems as good a time as any to revisit that list and see what’s changed.

There’s a huge climber to nab top spot, but there’s no change at the bottom. Or more accurately, there was change but now things have got even worse than they were then. July’s rankings can be found here and each club’s pre-season spot in this wantonly arbitrary list is in brackets below.

1. Brighton (10)
Goals at last to go with all the good football. A better manager than three of the now defunct Big Six. Last-minute equalisers at Crystal Palace. One point off top spot. The seaside. Marvellous.

2. Brentford (5)
Promotion giddiness from July now already nicely parlayed into first-season-excellence giddiness a la Sheffield United. Don’t stop and think about what happened next there, just revel in wins over Arsenal and Wolves and excellent points against your Liverpools and Villas.

3. West Ham (3)
There was no reason to suspect anything West Ham achieved last season was unsustainable, apart from the involvement of West Ham and their unshakeable ability to go all West Ham at a moment’s notice. West Ham fans wouldn’t be human if they didn’t secretly spend the whole summer panicking and waiting for the bum’s rush. If anything, though, this season is looking even better. Only Liverpool have scored more goals than the free-flowing, entertaining Hammers, and that’s before we even start on how much they’re enjoying absolutely everything currently going off at Tottenham.

4. Chelsea (2)
Defeat to Manchester City an obvious setback, but they have absolutely spangled both Arsenal and Tottenham already this season and still look to us the likeliest winners in what should be a title race for the ages having emerged with little damage really from what appeared on paper the toughest set of opening fixtures. General north London shoddiness might mean that assessment has to be slightly revised but still; they’re one point off top spot and their next Premier League games are against Southampton, Brentford, Norwich, Newcastle, Burnley and a newly rubbish Leicester.

5. Liverpool (12)
Top of the table and the only unbeaten side left but a weirdly antagonistic feeling at Anfield for some reason, where there appears to be a near-constant sense of underlying grumpiness about people not taking them seriously enough as title contenders or conversely people suggesting that they should be able to compete handily against the souped-up super teams that make up their rivals.

6. Aston Villa (4)
Handled the Jack Grealish Situation with a sensitivity and openness and professionalism that is less common than it ought to be in the multi-billion world of Premier League football. The signings to offset the loss of their talisman were sensible, and they’ve just pinched a win at Old Trafford which always puts a spring in the step.

7. Crystal Palace (11)
Only one win – albeit an excellent one – but also only two defeats and more than enough to hint that the Great Patrick Vieira Gamble could provide significant fun times rather than (or at least before) turning into a steaming pile of disastrous plop.

8. Manchester United (13)
Casually nipping in and nicking Cristiano Ronaldo from under the noses of their neighbours but the seal on a wonderful summer, but the manager is still Ole Gunnar Solskjaer and even the ones still (understandably) high on That Night in Barcelona know deep down that he isn’t good enough. And even if they still don’t accept it, the constant need to justify and argue about it is taking up a lot of bandwidth that should by rights be devoted to happiness and excitement about what is a truly exciting group of players.

9. Watford (7)
It’s almost October and there hasn’t been so much as a whiff of manager sacking talk at Vicarage Road. Heady days.

11. Everton (18)
The giddy thrill of last season may have gone, but after some summer bleakness and deep suspicion over appointing a manager from the red half of the city, there’s now also plenty of early evidence that Rafa Benitez might be slowly but surely putting together a sustainably good football team. Obviously, this is Everton we’re talking about, so that evidence will soon enough prove to be bunkum. But for now things are all going reasonably quite well.

12. Leeds (1)
The fuzzy feels from last season are still fresh enough that almost nobody inside or outside the club appears to have noticed that Marcelo Bielsa’s great entertainers and a club that just belongs in the top flight, you know? are now winless in six games and sitting in the relegation zone having entirely forgotten how to defend.

13. Leicester (8)
At least Leeds never really made any great pretence at being good at defending. Leicester were supposed to be a proper side doing proper grown-up football and being really very good at it. This season they keep defending like absolute clowns and having to chase games.

14. Wolves (17)
Three goals scored and five goals conceded in six games. If you’re not going to be great, at least be incompetently bad. Narrow 1-0 defeats full of honest endeavour and frustration and grievance will send a cheerful man to bleak town far faster than a serious of thrashings which can at least provide the prospect of some dark gallows humour and a mirthless chuckle at the farcical grimness of it all.

15. Southampton (16)
Worthy hard-working draws against Manchester United, West Ham and Manchester City are no good if you’re then going to lose 1-0 at home to Wolves, lads.

16. Arsenal (19)
From where things were a month ago it’s obviously a wild improvement, and the impact of youth in the invigorating NLD dismantling of Spurs made a huge boost even boostier. But they’ve still only beaten Norwich, Burnley and Spurs and the nagging fear has to remain in Gooner minds about what happens to Mikel Arteta and his team once they have to again take on any team that aren’t grim and broken relegation scrappers.

18. Norwich (6)
From July: “Promoted in excellent style and currently have reason to think this time they might be better prepared to avoid following that with abject relegation, as is their wont. September may bring cruel reality back to bear, but for now the Canaries are singing and full of hope.” Never mind September, August was more than enough to bring back that familiar sinking feeling.

19. Newcastle (15)
Talking of treading a familiar path, here’s Newcastle, the place where dreams go to die. A hated owner who from the outside appears to be sticking around just to troll an entire city. Manager is not much better. Nor is the team. Just no reason for optimism. Have led in three Premier League games this season but still yet to actually win.

20. Tottenham (20)
F***ing hell. Even accidentally going top of the table by mistake with those three straight wins now looks like part of a far wider banter. That they are now below Arsenal in the league just a few short weeks after the gleeful sharing of league tables where Spurs were top and the Gunners bottom is the Spursiest thing that has happened for, ooh, a good six weeks or so. The manager search was bungled and the wrong choice made after several more promising options were ignored or bollocksed right up. The worst thing is that now as we all mark time before Nuno Espirito Santo gets the boot is that he seems such an inherently reasonable chap that there isn’t even the prospect of the schadenfreude that came with panto villain Mourinho’s demise. Somehow things have managed to get worse since they were bottom of this list in July despite winning their first three games of the season in the meantime. What a club.