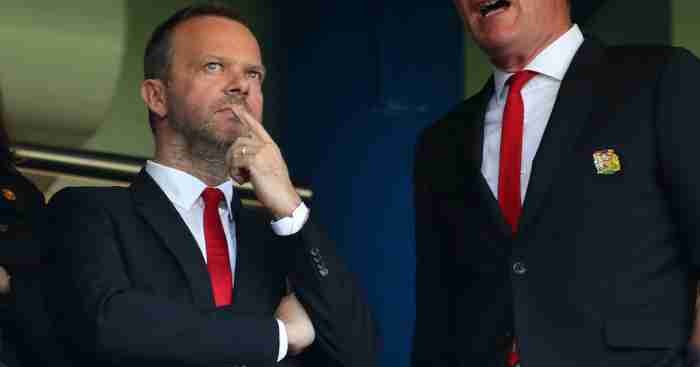 Come Friday night, Ed Woodward will have presided over 14 transfer windows at Manchester United, which gives hope to all of us worried that we’re crap at our jobs. Here they are ranked from least shambolic to most…

13) Summer 2014
Ángel Di María, Luke Shaw, Ander Herrera, Marcos Rojo, Daley Blind, Falcao
Out: Danny Welbeck, Shinji Kagawa, Alexander Büttner, Patrice Evra
Woodward did the important business early, hiring Louis van Gaal to replace the departed David Moyes and – still stung from the previous summer – he set about signing some top-quality talent. United broke their transfer record to sign Di Maria and it wasn’t Woodward’s fault that the medical failed to spot the absence of any heart in the winger. A year late – after claiming imposters had gone to the Spanish league offices to pay Herrera’s buy-out clause – United stumped up the cash for the midfielder, just as they did with little fuss for Luke Shaw. Blind looked like an astute signing and Rojo seemed no mug. But the most exciting deal was a season-long loan for Falcao. Again, we can’t blame Woodward for injuries robbing the Colombian of his predatory instinct.

12) January 2014
In: Juan Mata
Out: Wilf Zaha, Anderson
Woodward had much to learn from the previous summer and this time at least he delivered Moyes’ primary target. He made sure everyone knew it, though, having lovely Juan delivered to Carrington in a chopper like James Bond.

11) January 2017
In: –
Out: Morgan Schneiderlin, Memphis Depay, Bastian Schweinsteiger
United were ensconced in their natural habitat – sixth – but Mourinho was still getting his feet under the table so why spend any money when you can put it in the Glazers’ pockets instead? While Zlatan tore up the Premier League, Woodward quietly shuffled his summer 2015 flops out of the door.

10) January 2019
In: –
Out: Marouane Fellaini
Ole Gunnar Solskjaer had turned United into a winning machine powered by smiles and good vibes. Why spend any of that lovely money from the latest tractor partner?

9) January 2015
In: –
Out: Michael Keane, Wilf Zaha, Darren Fletcher
Presumably still dining off his summer success, Woodward didn’t bother with any recruitment midway through the 2014/15 season. At this point he was still living in blissful ignorance of the fact Di Maria and Falcao would flop hard.

8) January 2016
In: –
Out: –
The Telegraph‘s transfer window guide at the start of 2016 stated Van Gaal needed ‘advancing midfielders, accomplished wingers, an elegant number ten and a prolific centre-forward’. Chris Bascombe was sceptical, however, when teasing the prospect of moves for Ronaldo and Bale: ‘More likely Ed Woodward will work his way down the list of highly prized and marketable players, get frustrated, and end up arranging the return of James Wilson from his loan spell and possibly Sadio Mane from Southampton.’ That worst-case scenario would have done very nicely. Instead, Woodward did nothing, perhaps in the knowledge Van Gaal would be getting his marching orders in a few months.

7) Summer 2017
In: Romelu Lukaku, Nemanja Matic, Victor Lindelöf, Zlatan Ibrahimovic
Out: Adnan Januzaj, Wayne Rooney
After a year of Jose in which United won the treble – well, a Treble of sorts, actually more like a diet Double – a title charge was expected. Woodward lined Everton’s pockets once more for Lukaku before getting Matic away from Chelsea, where he probably would not have played much anyway. The vice-chairman even gave Mourinho a second £30million centre-back for the second summer in a row while re-signing Ibra on another deal after his previous season was ended prematurely by a knee injury.

6) Summer 2019
In: Harry Maguire, Aaron Wan-Bissaka, Daniel James
Out: Romelu Lukaku, Alexis Sanchez, Matteo Darmian, Chris Smalling, Ander Herrera, Antonio Valencia
Last summer was somehow productive yet still a failure. Woodward eventually stumped up for Maguire and though he has taken a bit of stick, he has been a positive signing. United claimed to have looked at 804 full-backs before signing one that struggles beyond the half-way line, while Daniel James is a player of real promise. But maybe Woodward and his cronies should have spent less time looking at second division right-backs in Norway and more in supplying Solskjaer with the striker he so obviously needed.

So Man Utd assessed 804 right-backs before prioritising Wan Bissaka. They got the right guy in the end, but 804 is probably 799 too many.

5) Summer 2015
In: Anthony Martial, Morgan Schneiderlin, Memphis Depay, Matteo Darmian, Bastian Schweinsteiger, Sergio Romero
Out: Angel Di María, Javier Hernandez, Jonny Evans, Robin van Persie, Nani, Rafael
Woodward wasted little time in shipping out one flaky winger before signing another. The Sch-midfield were expected to shore up United’s engine room, but they ended up being a bit sch-it. Bayern saw Woodward coming for Schweinsteiger and in Schneiderlin, United bought a footballing crab. It was thought Woodward had lost his mind when he agreed a deal which could cost up to £58million for Martial, though the France striker immediately gave the impression it would be money well spent. Four-and-a-half years later, we’re still not sure.

4) January 2020
In: –
Out: Ashley Young
Nothing confirmed yet but Bruno Fernandes is incoming. Finally. It still won’t make this a perfect window – United desperately need a striker – but things look brighter on Wednesday morning than they did on Tuesday night.

3) January 2018
In: Alexis Sanchez
Out: Henrikh Mkhitaryan, Zlatan Ibrahimovic
Ah, the winter window which seems to have spooked Woodward and you can’t blame him for having ‘Nam-style flashbacks to the time he agreed to pay Sanchez a f*cking fortune before unveiling his new attacker playing ‘Glory, Glory Man Utd’ on the piano. Sanchez was a disaster – but Woodward seemingly hasn’t given up yet on the Chilean.

2) Summer 2018
In: Fred, Diogo Dalot, Lee Grant
Out: Daley Blind, Sam Johnstone, Michael Carrick
Mourinho’s last summer became more about who Woodward didn’t sign, rather than the players he did. The manager was aching for another centre-back, his third in three years, but Woodward put his foot down before briefing the press over why he was right to ignore Jose’s wishes. Harry Maguire was too expensive – Liverpool’s fault apparently – while Boateng was too injury-prone. The eve of the new season was beginning of the end for Mourinho.

1) Summer 2013
In: Marouane Fellaini
Out: Paul Scholes (retired)
You always remember your first…Woodward’s maiden transfer window, and boy did it show! After playing Billy Big Bollocks all summer, letting it be known he was returning from United’s pre-season tour to conduct ‘urgent transfer business’, Woodward finished with only Fellaini through the door, and United paid £4million more than they would have done a month earlier. David Moyes didn’t help, talking about Cristiano Ronaldo, Gareth Bale, Cesc Fabregas and Toni Kroos during his first few months in charge, while Woodward tried to lowball Everton with a derisory joint offer for Fellaini and Leighton Baines. A sh*t show from start to finish.