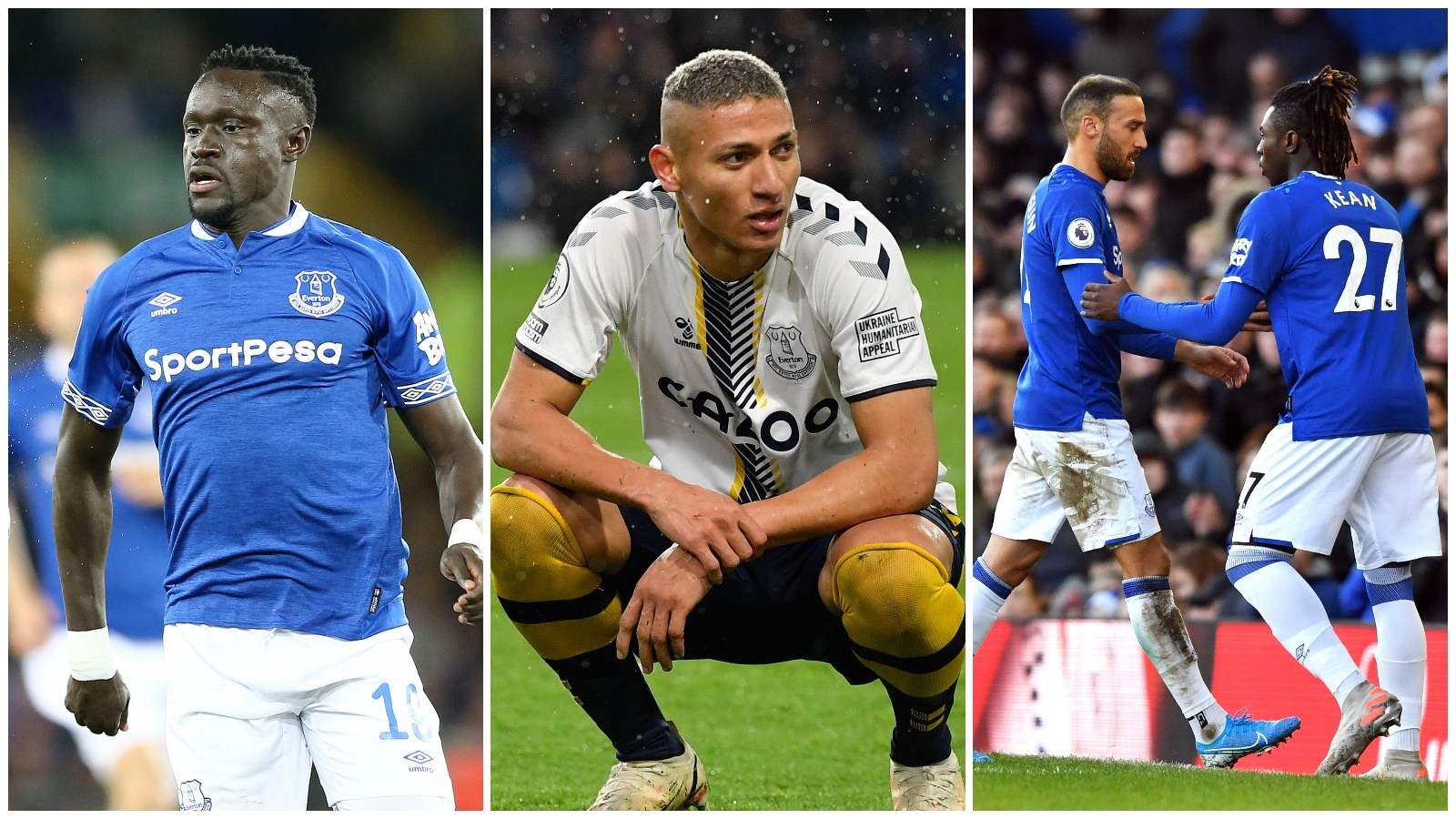 Everton have utilised the transfer market like rookies in recent seasons, spending over half a billion since David Moyes left in 2013.

They’ve gone so crazy we’ve had to narrow down our rankings to only include players the Toffees have spent over £10m on. Otherwise, it would have been a list consisting of over 70 people. This means that some good deals such as Dominic Calvert-Lewin and Demarai Gray’s transfers have been left out.

Like our Manchester United piece, all prices are taken via Transfermarkt.

24) Oumar Niasse (£16m)
Niasse has a genuine case for the worst Premier League transfer of all time.

21) Davy Klaassen (£24m)
Just one of many mind-boggling deals to be seen here.

20) Yannick Bolasie (£26m)
Bolasie was a baller for Crystal Palace. He played the game with flair and confidence and would mock defenders (especially Dejan Lovren) on a regular basis. As the cool kids say: the streets shall never forget.

But that was Palace and this is Everton. His spell at Goodison Park was forgettable at best. He scored twice in 32 and left for free last summer after loan spells with Middlesbrough, Sporting, Anderlecht and Aston Villa.

18) Morgan Schneiderlin (£20.7m)
Another player who was great for a Premier League rival, only to flop at Goodison Park. Schneiderlin swapped Southampton for Manchester United and was a bitter disappointment, perhaps showing that the grass is not always greener. Everton – and only Everton would do this – decided to splash out over £20m on the French defensive midfielder, who continued to regress before leaving for a measly £2m after three years on Merseyside.

17) Theo Walcott (£20m)
Walcott is a very underrated Premier League player. It is fair to say that he didn’t live up to his early hype, but he still had a bloody good career. Before Everton came calling, anyway.

15) Michael Keane (£25.65m)
For a while, Gareth Southgate loved starting Keane for England, who is now nowhere near the Three Lions squad. He’s not justified his price tag but is at least a mainstay in Everton’s starting XI as things stand.

14) Ashley Williams (£12.6m)
It was about time that Williams got a move after eight productive years with Swansea. He was linked with numerous teams and it was Everton who bit the bullet and purchased the Welsh centre-half. Williams was never close to his influential best at Goodison and is one of many on this list to leave for nothing after coming in for over £10m.

13) Ramiro Funes Mori (£11.6m)
Funes Mori’s most amusing moment in an Everton shirt came in a Merseyside derby when he grabbed the badge after being sent off. This isn’t really relevant, but it’s bloody funny. He played 67 times for the Premier League side and wasn’t very good. Not horrendous, but he won’t be remembered for the right reasons by the fans.

12) Andre Gomes (£22.5m)
Everton did an Everton and took a chance on Gomes after he flopped at Barcelona. Two goals and four assists in 98 games is not a very good return for the Portuguese playmaker. He hasn’t scored in the Premier League since 2018/19.

11) James McCarthy (£13.7m)
Signed from Wigan Athletic, McCarthy made 133 appearances over six years at Goodison Park. He was solid in his first few years before injuries took over. The Ireland international played 13 times in 2016/17, six times in 2017/18 and once in 2018/19. Really unfortunate for a solid Premier League player who now warms the bench for his boyhood club Celtic.

10) Alex Iwobi (£27m)
Iwobi, not Dele Alli, has improved under Frank Lampard and is beginning to look like a handy player.

Having originally seemed like one of the worst pieces of business in Premier League history, the Nigerian can justify his price tag if he maintains his confidence and chips in with a few more goals.

Alex Iwobi has completely silenced every single critic. Everton fans including myself have been served up humble pie, and rightly so. He has been the stand out player since Lampard came in. Consistantly playing with a point to prove regardless. He was incredible on Saturday. pic.twitter.com/Nz8dlw2Bbs

9) Vitaliy Mykolenko (£21m)
The left-back has 21 caps for Ukraine and has only played six times in the Premier League since joining in January.

8) Nathan Patterson (£12.6m)
Patterson joined from Rangers in January and has a promising career ahead of him.

7) Ben Godfrey (£24.75m)
Utilised at right-back, left-back and centre-half, Godfrey has the potential to come good. He just needs to put this season behind him.

6) Allan (£21m)
A leading defensive midfielder in Serie A, Allan joined Everton from Napoli with a big reputation. He’s been nowhere near his true self for the Toffees and the 31-year-old doesn’t look likely to regain his old form. Having said that, his 2020/21 under Carlo Ancelotti wasn’t too bad as the side finished 10th.

5) Lucas Digne (£18m)
Sold after falling out with Rafael Benitez, who was sacked three days after Digne’s transfer to Aston Villa was confirmed. What a shambles. At least they made a profit, which is a bonus, right?

4) Abdoulaye Doucoure (£19.8m)
£20m is a good deal all things considered. Doucoure is a pretty consistent player and it all went a little Pete Tong when he got injured. A rare bit of positivity in this bleak article!

3) Jordan Pickford (£25.65m)
England’s No. 1, Pickford joined as one of the best young goalkeepers in the country. Overall, he’s not exactly been bad but then again, he’s not been very good. Capable of some absolutely bizarre moments, perhaps Pickford needs a competent defence in front of him to replicate his form for England.

2) Richarlison (£35m)
Richarlison has scored 49 times since joining from Watford in 2018. Obviously, this term has not been good for anyone involved with Everton, but at least they still have the Brazilian, who is a great player with time on his side.

He is destined to move on. When that will be and who he will join remains to be seen, but it would be surprising to see Richarlison still representing Merseyside blue in two or three years’ time.

1) Romelu Lukaku (£31.8m)
Lukaku couldn’t get a sniff for Chelsea, meaning he was loaned out to West Brom and Everton before joining the Merseysiders on a permanent basis for over £31m in 2014. The Belgian became an elite striker under Roberto Martinez and the Toffees flogged him to Manchester United for a whopping £76m after he chipped in with 87 goals in 166 games.

He wasn’t great for the Red Devils, then was great for Inter Milan, and is now not great at Chelsea.