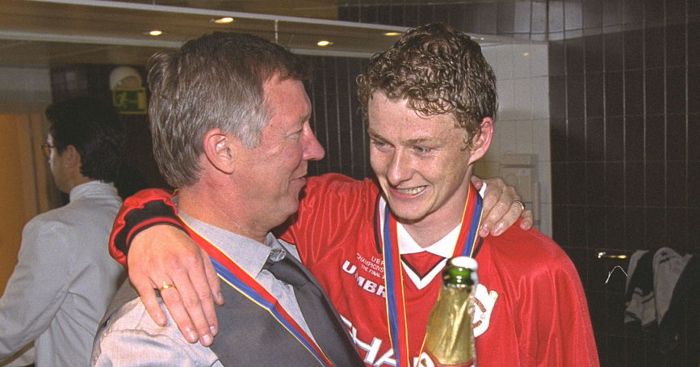 28) 2003 – Juventus 0-0 Milan (2-3 on penalties)
It might seem reductive to consider the only goalless Champions League final as the worst, but the 2003 edition truly was a slog. It wasn’t without its moments – Andriy Shevchenko’s cruelly disallowed goal, Antonio Conte hitting the post and Andrea Pirlo striking the bar – but that second half in particular was a test of spectator endurance more than anything. Their Serie A meetings that season ended in a 2-1 win apiece but Old Trafford was treated to nothing of the sort. Even half the penalties were missed in the shootout as Dida ventured ever so slightly off his line.

27) 2004 – Monaco 0-3 Porto
To prove that goals do not necessarily equate to a pulsating game, watch the 2004 Champions League final and retain your consciousness for the full 90 minutes. An audience not quite anaesthetised to the stylings of Jose Mourinho found that the novelty of two surprise success stories had worn off long before full-time as the Portuguese starved the occasion of any intrigue. Monaco failed to muster a single shot on target; Porto themselves only managed four as they registered less than 50% possession.

26) 2010 – Bayern Munich 0-2 Inter Milan
As the BBC said at the time, it ‘might not have been one for the purists’. Mourinho was once at great pains to point out that he couldn’t properly empathise with Tottenham upon his appointment as manager in November 2019 because “I never lost a Champions League final”. This was a fine example as to why, as Inter channelled the determination and resilience of their semi-final victory over Barcelona to secure a remarkable Treble in unexceptional circumstances. It was also the first European Cup final to be moved back from a Wednesday to a Saturday which remains one of the great first-world injustices of our time.

The man that made Inter's historic treble. pic.twitter.com/j9AcErFw5Q

25) 1993 – Marseille 1-0 Milan
UEFA would perhaps rather the world forgot about the winner of its first revamped Champions League; the world would happily forget the final itself. Marseille reached the final amid claims of corruption, bribery and much worse, while Milan boasted a side containing Paolo Maldini, Franco Baresi, Gianluigi Lentini and Marco van Basten in his final game ever. They were kept at bay by Fabien Barthez, Marcel Desailly and Basile Boli, who scored the only goal shortly before half-time.

24) 1996 – Ajax 1-1 Juventus (2-4 on penalties)
A similarly sketchy final in hindsight again undeniably pitted the continent’s two best sides against one another, but the subsequent game was less than the sum of its numerous parts. Goalscorers Fabrizio Ravanelli and Jari Litmanen – both of whom capitalised on goalkeeping mistakes – would experience varying Premier League careers thereafter but even the former would struggle to conjure many memories besides his opener and lifting the trophy.

23) 2021 – Manchester City 0-1 Chelsea
While 19 points separated the two teams in the Premier League, Pep Guardiola helped bridge that chasm by turning his nose up at the idea of playing a holding midfielder. Thomas Tuchel welcomed the unexpected olive branch and a year after succumbing to a 1-0 defeat in the final with Paris Saint-Germain, the German engineered victory by the same scoreline thanks to Kai Havertz. But it was no classic.

22) 2001 – Bayern Munich 1-1 Valencia (5-4 on penalties)
The all-penalty final saw Gaizka Mendieta and Steffan Effenberg trade spot-kicks in normal time, with Santiago Canizares saving from Mehmet Scholl, before Bayern triumphed in an eventual shootout. There were 28 shots so attacking football was not in particularly short order, but only goalkeeping fetishists would have truly enjoyed themselves.

21) 2019 – Tottenham 0-2 Liverpool
An early goal can do one of two things to a match with such high stakes: galvanise the team that concedes and lead to a pulsating game or encourage the scorers to become more defensive, resolute and frustrating as they seek to protect their advantage. The 2019 Champions League final was a prime example of the latter. Mo Salah put Liverpool in front in the second minute and while Tottenham were the better side thereafter, they never really recovered to the point where they threatened to equalise. Divock Origi provided the last slice of bread to a fairly mediocre sandwich just before the final whistle. After the ridiculous drama of the respective semi-finals, this was perhaps an understandable anti-climax and a case of the result being so very much more important than the performance.

20) 2000 – Real Madrid 3-0 Valencia
That both finalists came from the same country for the first time in European Cup history did not help the first showpiece of the new millennium. Real Madrid actually finished lower than Valencia in La Liga – fifth to third – but the nature of the destruction gave it an air of a typical domestic meeting rather than the biggest match of the season. Steve McManaman’s volley was lovely, mind.

19) 2007 – Milan 2-1 Liverpool
A final can sometimes suffer for its lack of freshness. Milan and Liverpool, of course, had the unenviable task of living up to their incredible clash of just two years prior. They never really stood a chance. The three goals were little more than ordinary and partial Dani Alves alternative Jermaine Pennant was probably the best player, for Christ’s sake.

18) 2017 – Juventus 1-4 Real Madrid
Mario Mandzukic’s equaliser, one of the three greatest goals in Champions League final history, deserved so much more. Juventus were primed to deliver as much as late as the hour mark as they were still level, but they simply could not keep up as Real feigned to help The Old Lady cross the road before pushing them into onrushing traffic.

17) 2009 – Barcelona 2-0 Manchester United
There goes that curse of the early goal again, the bane of many a neutral. Samuel Eto’o scored in the tenth minute and Lionel Messi the 70th as an “unreal” Barcelona side were just a level or two beyond Manchester United, who had just one shot on target in each half.

16) 1998 – Juventus 0-1 Real Madrid
“The 1998 Champions League final was possibly the most important game in Real Madrid’s history,” winning captain Manolo Sanchis once suggested, their 32-year wait to be crowned European champions finally coming to an end in Amsterdam. It was an incredible moment, but a fairly typical game.

15) 2016 – Real Madrid 1-1 Atletico Madrid (5-3 on penalties)
In terms of grit and battle, 2016 offered up precisely what one might expect from a Madrid derby helmed by Zinedine Zidane and Diego Simeone. A total of 42 shots and 34 fouls made for a titanic tussle that Real eventually edged in a shootout.

13) 2015 – Juventus 1-3 Barcelona
“Spectacular” was the word Luis Enrique used to describe Barcelona’s win over Juventus in the 2015 Champions League final. History is written by the victors, of course, but it seems a generous interpretation. Not that it wasn’t an excellent game: the continent’s best defence gave a supreme attack quite the scare before eventually succumbing to defeat.

12) 2018 – Real Madrid 3-1 Liverpool
Starved of possibly its best player after half an hour, the 2018 Champions League final did not provide quite the pulsating mesh of styles it had promised. Liverpool were understandably subdued and Real plodded through large portions before the rest was largely lost in a cloud of goalkeeping embarrassment.

11) 2011 – Barcelona 3-1 Manchester United
As far as exhibitions go, they don’t come much better. But there was always a sense of Barcelona and Manchester United being a bit of a mismatch, even when Wayne Rooney equalised for the latter after half an hour. Lionel Messi and David Villa had secured a third European Cup in six seasons before Sir Alex Ferguson knew what hit him, while Rooney was begging for mercy.

10) 2012 – Bayern Munich 1-1 Chelsea (3-4 on penalties)
The late drama of two goals in the final seven minutes went some way to undoing the relative monotony of the preceding 80 or so. It does, however, remain hilarious that Bayern Munich had 20 corners and failed to score from any, while Chelsea had only one and managed to rescue themselves with it.

9) 2002 – Bayer Leverkusen 1-2 Real Madrid
Were it not for an injury to starting goalkeeper Cesar, facilitating the introduction of Iker Casillas, an iconic moment in Champions League history might have been lost to the ether. As it was, Casillas made a string of impressive saves to preserve the lead Zinedine Zidane granted Los Blancos in spectacular fashion at Hampden Park. Few expected Leverkusen to make it so far but no-one could claim they didn’t contribute to a great game.

8) 2006 – Barcelona 2-1 Arsenal
While an early sending-off can so often inhibit a team and a spectacle, Arsenal seemed invigorated by the dismissal of Jens Lehmann in Paris in 2006. They took the lead through Sol Campbell and were 15 minutes from unthinkable glory before Henrik Larsson rewrote the script as only he could.

7) 1999 – Manchester United 2-1 Bayern Munich
When we finally drain the well of unoriginal content ideas and come to rank the greatest two-minute spells in Champions League history, Manchester United’s stoppage-time exploits against Bayern Munich in 1999 might well fare better. But there is a reason the Wikipedia summary of the first and second halves at the Nou Camp are offered as many paragraphs – three – as the entirety of injury-time.

6) 2013 – Borussia Dortmund 1-2 Bayern Munich
After their two Bundesliga meetings ended in 1-1 draws, Borussia Dortmund and Bayern Munich did battle at Wembley to settle the matter beyond all doubt. Jurgen Klopp side started far better but fell behind after an hour, only to equalise eight minutes later. Arjen Robben then scored the winner in the penultimate minute to conclude an even and excellent game.

5) 2014 – Real Madrid 4-1 Atletico Madrid (after extra-time)
When one team so obviously prepares for 90 minutes, the unexpected and sudden addition of 30 more can lead to something of a damp squib. Atletico Madrid led for almost an hour before Sergio Ramos’s last-gasp equaliser, at which point Diego Simeone’s side was drained both mentally and physically and bereft of substitutions. Extra-time was an exercise in brutality; it had become difficult to watch by the time Cristiano Ronaldo was baring his triumphant, flabby chest.

4) 1994 – Milan 4-0 Barcelona
If irresistible dominance is your preference – and no-one is here to judge your bedroom habits – the 1994 Champions League final is a classic of the genre. Milan were without a number of injured and suspended players but ruthlessly dismantled Barcelona all the same. It just would have been nice if the Spaniards had turned up.

3) 2008 – Manchester United 1-1 Chelsea
Some continental meetings between two teams from the same nation suffer for familiarity. The 2008 Champions League final was the antidote to that particular poison, as Manchester United and Chelsea freely traded blows like super-heavyweights knowing this would be their defining bout. Cristiano Ronaldo landed the first blow, only to be floored by Frank Lampard. The dismissal of Didier Drogba in extra-time might even have inadvertently decided the destination of the cup, as John Terry slipped 12 yards from glory before Edwin van der Sar kept out Nicolas Anelka.

2) 1997 – Borussia Dortmund 3-1 Juventus
The biggest surprise in Champions League final history benefited from an unexpected winner toppling a European superpower, a two-goal salvo from the uncelebrated Karl-Heinz Riedle, an understated backheel goal from Alessandro Del Piero and one of the finest examples of man-marking in the sport’s history as Paul Lambert shadowed Zinedine Zidane throughout. Add substitute Lars Ricken lobbing Angelo Peruzzi with his first touch and you have a classic.

1) 2005 – Milan 3-3 Liverpool (2-3 on penalties)
It’s not really a contest. Nor should this have been and, indeed, at one point nor was it. A Milan side littered with generational brilliance scored the earliest goal in Champions League final history and led 3-0 at half-time before p*ssing Steven Gerrard off. Liverpool were unfathomably level by the 60th minute and won their fifth European Cup on penalties over a shellshocked Italian side. That extra-time double save by Jerzy Dudek from Andriy Shevchenko still defies laws of gravity and common decency.