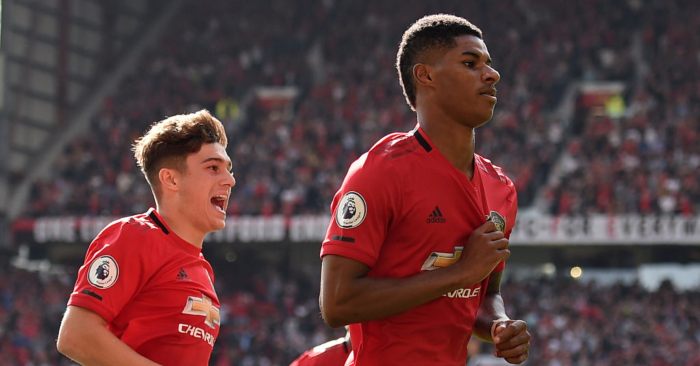 Chelsea and Manchester United are getting plaudits for playing the kids, but how do the other Premier League clubs shape up? We count the minutes played by players aged 21 and under in the top flight this season…

Palace’s youngest player to feature in the Premier League this season is the 24-year-old Max Meyer.

Has the Spurs production line stalled?

There has at least been one winner from City’s defensive crisis; Foden now needs similar injury problems to engulf three attacking midfielders.

At some stage, Watford surely need to trust their club record signing.

Prediction: Ismaila Sarr to make his full #WatfordFC league debut at the start of the 2020/21 Championship season.

Alzate was Man of the Match in Saturday’s 0-0 draw with Newcastle. Graham Potter is showing an appetite to promote youth that was missing from Chris Hughton.

And clearly the man we are contractually obliged to call ‘Manchester United target Longstaff’ would have played more minutes if he had been fit.

Kean is a potentially great signing but he is still only 19. Barely an adult.

There was some consternation when Luiz was dropped for Sunday’s visit to Arsenal; Dean Smith opted for experience at the home of the accidental entertainers.

Only three PL starts between them, but Wolves are certainly padding out their squad with young players.

The 19-year-old Englishman is one of only 13 players to start for Burnley this season; Sean Dyche does not like change.

Dwight McNeil, once a part of United’s Academy, is now on 7 assists from 28 PL appearances. Only 19 and already a key player for them.

Our first every-minute (young) men. But both managers are reluctant to blood further.

Ralph Hasenhuttl is changing things at Southampton. And at least one of those young men has a very bright future.

Eddie Howe is changing things at Bournemouth too.

Yes, Arsenal are chaotic but they are entertaining. And they are definitely pivoting towards youth.

Matteo Guendouzi, at 20, indisputably ran the 2nd half of a Premier League match today single-handedly. Ups & downs (poor marking for Aston Villa’s 1st goal) granted at this age, but in a far less glamorous way he might be the most enthralling French prospect since Kylian Mbappé.

Three of Frank Lampard’s first-choice XI are 21 or under. It’s that kind of statistic that distracts from the points total.

And two of those kids are now undroppable. And we really should keep remembering that Rashford is still just 21.

That would be Norwich, just casually producing a whole generation of young players…

Good news for @NorwichCityFC – Max Aarons, Ben Godfrey & Todd Cantwell set to be called up for the first time by the England u21s on Friday. A reward for their impressive starts in the Premier League #ncfc