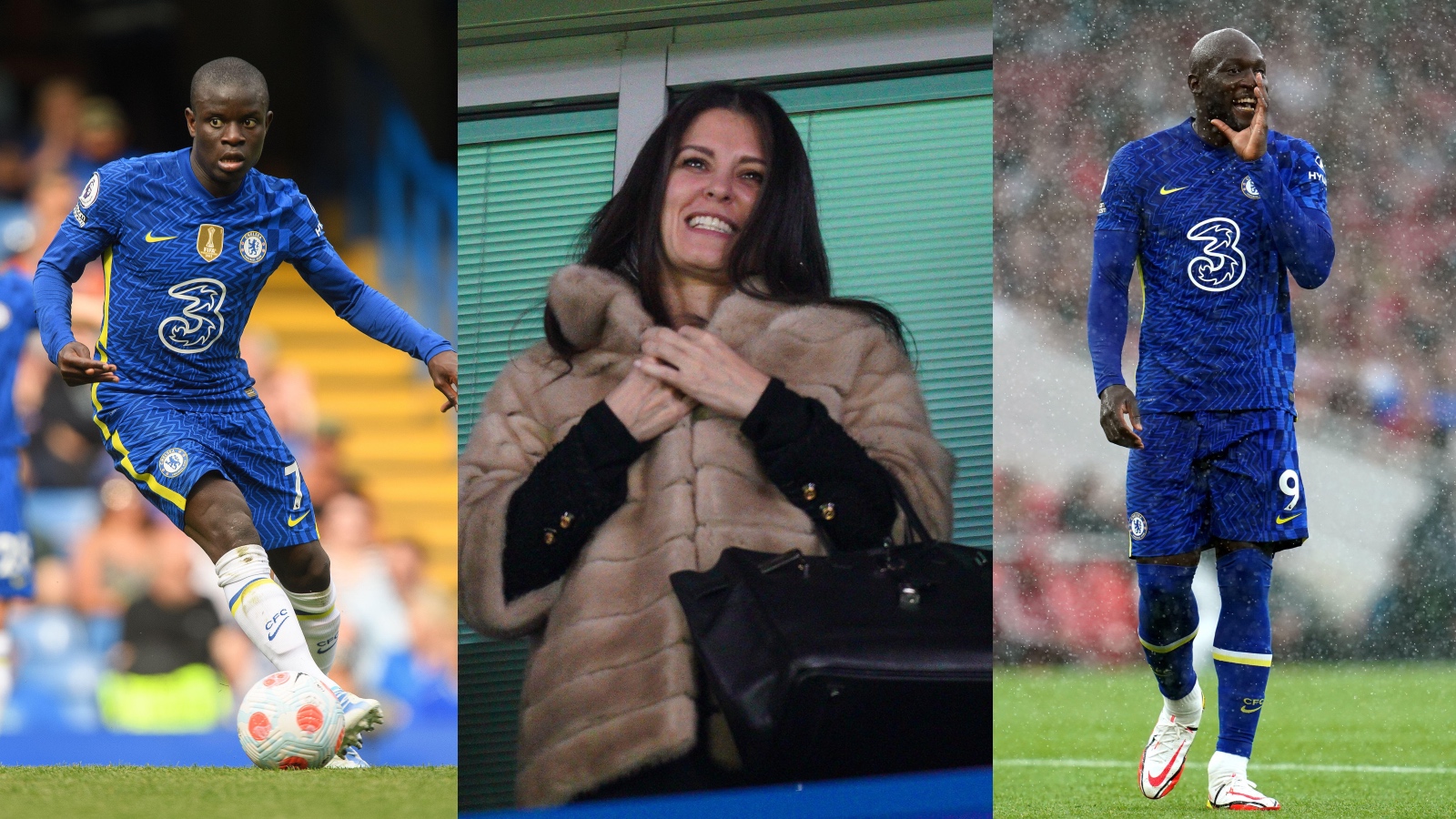 Marina Granovskaia is set to leave Chelsea this summer, bringing her eight-and-half-year directorship at Stamford Bridge to an end.

The transfer guru has overseen the purchase of £1.1bn worth of players at Chelsea, and the Best Club Director in European football gong last year. There have been some hits but more than a few horror signings in her time at the helm and we’ve ranked all 40 of the permanent ones.

Players had to make a first-team appearance to be included, so you can keep your Mario Palasics and Papy Djilobodgis.

38) Tiemoue Bakayoko (Monaco, £36m)
A hugely exciting signing who could barely trap the ball on his arrival at Stamford Bridge. Chelsea signed him over Monaco midfield partner Fabinho, who moved to Liverpool a year later. FFS.

36) Romelu Lukaku (Inter Milan, £97.5m)
Incredibly tempting to succumb to recency bias and put the whinging little tyke bottom of the pile, but he somehow ended the season as Chelsea’s top scorer with 15 goals from 44 appearances. Back to Inter Milan he goes, undoubtedly to bang goals in for fun once again.

35) Mohamed Salah (£15m)
Signed by the club in January 2014 after he had the cheek to score home and away in the Champions League group stages against them for Basel, Salah left after just over a year at Stamford Bridge due to a reported “personality clash” with a certain Portuguese manager, never to be seen again…

34) Juan Cuadrado (£27.9m)
Four starts for Chelsea in six months before two loan spells and then a permanent move to Juventus, for whom he’s made 267 appearances and won five Serie A titles, playing predominantly at right wing-back. Absolutely not his fault he’s so low in this ranking.

33) Kenedy (Fluminese, £7m)
Recalled by Thomas Tuchel from his loan spell with Flamengo in January to play 59 minutes in the last game of the season. Got an assist, to be fair.

30) Michy Batshuayi (Marseille, £35m)
He’s still a Chelsea player, folks, and will return to much fanfare after 14 goals for Besiktas last term. The club should probably try to avoid Belgian strikers.

29) Ethan Ampadu (Exeter City, £2.5m)
How on earth is this guy still only 21? There are calls for Thomas Tuchel to have a good look a him in pre-season, mainly through desperation rather than desire.

28) Asmir Begovic (Stoke City, £10m)
Played for half the 2015/16 season in place of the injured Thibaut Courtois, winning just four of the 17 games he played.

27) Willy Caballero (Manchester City, free)
Played a handful of games in 2020 when Frank Lampard realised the then-39-year-old was better than the £72m cardboard cut-out that had been tending Chelsea’s goal.

25) Davide Zappacosta (Torino, £22.5m)
Currently loving life at Atalanta (because who wouldn’t?), Zappacosta is on a long, long list of full-backs bought on a whim that failed to usurp Cesar Azpilicueta.

23) Loic Remy (QPR, £12m)
Seemed like a decent option as a back-up for Diego Costa, and actually, as Chelsea strikers go, he wasn’t all that bad. He scored seven goals at a rate of one every 94 minutes in his debut season.

22) Felipe Luis (Atletico Madrid, £18m)
Another to suffer through Azpilicueta being a better left-back than most left-backs.

21) Ross Barkley (Everton, £15m)
He’s still only 28 and clearly has plenty to offer, if not quite enough for Chelsea.

20) Timo Werner (RB Leipzig, £48m)
There’s perhaps no greater indication of Chelsea’s transfer market struggles than Werner squeezing into the top half of this ranking. Continues to score goals for Germany while playing like a stray dog at Stamford Bridge.

19) Didier Drogba (Galatasary, free)
The great man would of course be top of this ranking had this been his first spell, but he reached nowhere near those heights on his return in 2014/15, scoring four goals in 28 Premier League appearances, mainly from the bench.

18) Hakim Ziyech (Ajax, £36m)
Always seems on the verge of balling his fists, stamping his feet and throwing a tantrum. Chelsea fans have seen very little of that left-foot magic made so desirable though his displays for Ajax.

17) Christian Pulisic (Borussia Dortmund, £57.5m)
How good would we think Pulisic is if he played for, let’s say, Brighton? Would he be a standout player? Not convinced. One of a bunch of ‘meh’ Chelsea forwards.

16) Olivier Giroud (Arsenal, £15.5m)
Up there with the greatest not-quite-but-nearly strikers this century. If you want guaranteed goals from a back-up, Giroud is your man, as he was for Chelsea.

15) Kurt Zouma (Saint-Etienne, £13m)
A good centre-back that, despite the current defensive mess, Chelsea were probably right to move on and got a fair price for.

14) Pedro (Barcelona, £24m)
43 goals and 28 assists in 206 appearances for Chelsea and some absolute crackers among them. Blues fans can be forgiven for getting misty-eyed at the thought of Eden Hazard, Willian and Pedro as their forward options.

13) Marcos Alonso (Fiorentina, £20m)
An out-of-the-blue signing, the former Sunderland loanee was arguably the pivotal signing in the summer of 2016 as that famous Antonio Conte shuffle led to a back five with Alonso at left wing-back. Now heavily linked with Barcelona, he’s got one of the sweetest left-foot pings in the Premier League.

12) Kai Havertz (Bayer Leverkusen, £72m)
Yet to realise that £72m potential, but he’s clearly the most talented of that recent crop of forward signings at Chelsea, and scored the winner in the f***ing Champions League, so there’s that.

11) Ben Chilwell (Leicester City, £45m)
Chilwell was brilliant before rupturing his cruciate ligament at the end of November, scoring a goal in each of his first three games of the campaign. Chelsea were three points clear before he was ruled out for the rest of the season.

10) Jorginho (Napoli, £51m)
Third place in the Ballon d’Or in 2021 but that wasn’t enough to convince many people that he’s any good at football. ‘Too slow’ is the typical criticism. But he was a wonderfully calm presence for Chelsea as they won the Champions League and is a victim of his mistakes, though they’re few and far between, being absolute howlers.

9) David Luiz (PSG, £31m)
A joke to many but revered by the majority of Chelsea fans, who will bring up his heroics in various 2012 Champions League games as evidence that he’s not the ADHD-addled child he was often painted to be.

8) Mateo Kovacic (Real Madrid, £40.5m)
One of the very best in the world at dribbling through the press. Very rarely has a bad game and a glorious player to watch with or without the ball. If only he could shoot…

The start of Chelsea’s fightback…💪

Kovacic got their first goal of the match with an absolute stunner! 🚀 pic.twitter.com/EvhnFEnTHF

7) Edouard Mendy (Rennes, £21.5m)
25 clean sheets in 45 games in his debut season is a silly record. Nine of those coming in 12 Champions League games is sillier. When asked about his relationship with Tuchel he said “we can talk about everything and nothing”, which is a phrase I want to drink down like a cup of hot chocolate.

6) Thiago Silva (PSG, free)
He can feasibly find himself playing against footballers half his age. But it often feels like he’s 18 and they’re nine. Is there a fancier car than a Rolls Royce? Because that’s what he plays like.

5) Nemanja Matic (Benfica, £22.5m)
He’s now left the Premier League in a haze of discontent like all the other Manchester United departees, but he was utterly brilliant alongside Cesc Fabregas as they won the title in 2015, and once again next to N’Golo Kante in 2017. Criminally underrated.

4) Diego Costa (Atletico Madrid, £34m)
The striker Chelsea fans wanted Lukaku to be. An absolute brute of a man.

3) Antonio Rudiger (Roma, £31.5m)
Managed to rein his madness in to a perfect level under Tuchel. Fiercely aggressive but calm when it mattered, he will be sorely missed for both his quality and character.

2) Cesc Fabregas (Barcelona, £30m)
One of the most impactful signings in Premier League history. His combination with Costa was remarkable as they stormed to the title in his first season under Mourinho. He got 19 assists in that campaign, including this one etched on the brains of everyone who’s ever seen it. Wait for the slow-mo, folks…

Still wondering to this day how Cesc Fàbregas managed to find André Schürrle with this outrageous pass, one of the greatest assists that we’ve seen in the Premier League. 👏 pic.twitter.com/3Ah0TOKF1A

1) N’Golo Kante (Leicester, £32m)
A pivotal signing as Chelsea won the league in Conte’s first season and Man of the Match in both semi-finals and the final of the Champions League in 2021.

Tuchel claimed it was a “miracle” Chelsea finished third last season without Kante for much of the season “because he is our Mo Salah, he is our (Virgil) Van Dijk, he is our (Kevin) De Bruyne, he is simply that player”.