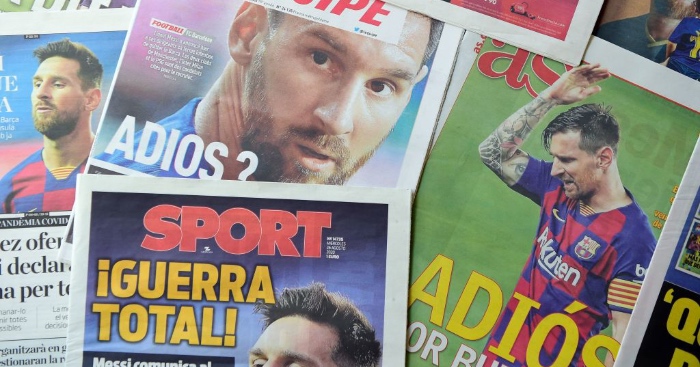 Nobody panic. Take a deep breath…the greatest footballer has faxed in a transfer request. Lionel Messi could very well end up staying at Barcelona, but let’s assume he won’t. We’ve ranked his potential landing spots, from least to most likely.

17) Stoke City
“I asked Messi about that [whether he could do it on a cold, wet Wednesday night in Stoke],” Guillem Balague revealed in an interview for Sky Sports. “He said, ‘Those people that say that should realise I played in awful conditions in Rosario when I was 11 years old, with glass on the pitch, with holes and everything,’ … And he also played good.”

16) Rangers
‘In 2004, Rangers boss Alex McLeish made an attempt to bring Messi to Ibrox on loan, but the move fell through and McLeish went on to sign Alex Rae.’ A glorious line from Glasgow Live.

Messi has scored 634 goals and contributed 285 assists since; Alex Rae hasn’t. But he did retire in 2009 – it’s hardly a fair comparison.

13) Arsenal
Lionel Messi is among the reported cavalcade of world superstars that drifted past Arsene Wenger on their way to inevitable glory elsewhere. Mikel Arteta hasn’t really got any money to spend, and although Messi could leave on a free, his £970,000-a-week wages are surely too sticky a ‘sticking point’.

12) Leeds United
They are perhaps the two most famous sons of the north-eastern Argentine city of Rosario. Both began their careers at Newell’s Old Boys. But their professional paths are yet to cross.

Messi spoke of his admiration for Marcelo Bielsa when he was in charge of Athletic Bilbao: “It’s a beautiful thing to see that Bielsa, someone I didn’t have the luck to have as a manager, is doing well. Many have told me that he is very similar to Guardiola. But hey, I didn’t have him. But obviously I wish one day I can have him as a manager.”

If the Barca bosses had heeded Messi’s advice and plumped for Bielsa over Ronald Koeman, they wouldn’t be in this mess. The solution for Messi? Move to Bielsa rather than Bielsa moving to him. The actual Messi with the Yorkshire Pirlo. Yes, please.

11) Liverpool
It might be ‘drool-worthy’ and ‘terrifying’, but it ain’t happening.

10) Real Madrid
It would be a bit funny, but more of a crying shame. Luis Figo and Ronaldo made the switch, but this would be different. There’s no comparative example to what would be the biggest f*** you in football history.

9) Inter Miami
David Beckham has one ‘designated player’ spot open at Inter Miami. The rule, ironically nicknamed the ‘Beckham Rule’, allows MLS clubs the option to sign three players that would be considered outside their salary cap. The new MLS franchise already have Rodolfo Pizarro and Matias Pellegrini as designated players, with various options touted as taking the third and final position.

Luis Suarez – deemed surplus to requirements by Koeman – and Edinson Cavani have been linked, but Beckham must surely now be considering Messi. It’s a move not beyond the realms of possibility, but perhaps more likely a couple of years down the line, after Messi has his hands on the Champions League trophy for a final time.

8) Newell’s Old Boys
A return to his boyhood club is probably going to happen, but again, Messi has unfinished European business.

7) Bayern Munich
They swept aside all in their path on their way to European glory this season and are surely nailed on favourites to retain their title. If Messi wants to win the Champions League, Munich is the obvious place to do it. But with Leroy Sane arriving this summer, they do have an embarrassment of forward riches.

6) Chelsea
Chelsea are already on course to break the transfer window record, so why not smash it to smithereens? Rio Ferdinand has “just heard” Frank Lampard is in for him…

Just heard Frank Lampard is now in for #messi
Some window this if Lamps pulls this off !!

5) Juventus
The potential for the joyous faux happiness on Cristiano Ronaldo’s face as Messi scores a hat-trick has to be balanced with the unlikely but somehow very real supposition that the world will implode if they both play for the same team.

4) Manchester United
Messi is one of very few footballers with a big enough name not to simply be known as a Jadon Sancho ‘alternative’ – but that doesn’t mean he’s not. United need a right winger, so why not the very best of all of them?

He of course doesn’t have the legs of Daniel James, meaning backs-against-the-wall fixtures could see Messi sitting on the bench watching the Welshman run the ball harmlessly out of play, which is more than an intriguing proposition.

If they were to open negotiations now, United fans can expect Ed Woodward to tie up the deal anytime between August 2021 and January 2022.

But for those scoffing at the transfer dealings of Woodward, and the hamstringing of the Glazers, it’s worth considering that in March, the Tampa Bay Buccaneers signed veteran quarterback Tom Brady, one of the greatest players in the sport’s history. The Buccaneers owners? The Glazer family; they’re not averse to a huge transfer coup.

3) PSG
A move to PSG always seems like a bit of a waste, and anything a state-owned club wants we immediately hope they don’t get. But if it wasn’t likely before, the fact they got so close to Champions League glory this season makes it frustratingly probable.

For Messi, a move to PSG offers a very realistic chance of winning the trophy for a final time. For PSG, Messi could be the last piece of a puzzle they are so openly itching to complete.

2) Inter Milan
The Suning group – the Chinese owners of Inter Milan – inexplicably used an image of Messi projected on to Milan’s Duomo cathedral to advertise the Serie A clash between the Nerazzurri and Napoli back in July. In response, Antonio Conte claimed: “It’d be easier to move the Duomo than to bring Messi to Inter!”

📸 [MD] | An image of Messi on the Duomo di Milano was shown to promote the Inter-Napoli match on Chinese television by Suning, the Asian owner of the Milanese club pic.twitter.com/wzkVhnR11J

But Inter were the one club said to be holding talks with Messi before the transfer request, and appear to be pushing hardest for his signature. His former agent claims Inter is “already his team”, while his current advisor – also his dad – has ‘splashed out’ on a pad in Milan. With Barcelona long-linked with a move for Lautaro Martinez, it’s time to sound the swap deal klaxon.

1) Manchester City
Pep Guardiola is often beaten with the Messi stick – labelled a Champions League fraud as he would never have won it without the little magician. Does he care? Probably not. Would he reject the chance to sign Messi just to prove he can win it without him? No.

There’s no secret in the mutual love between Guardiola and Messi, who both enjoyed the peaks of their careers in each other’s company. And Manchester City – like PSG – will do anything to win Europe’s showcase competition. A level of desperation exhibited by just one other: Messi himself.