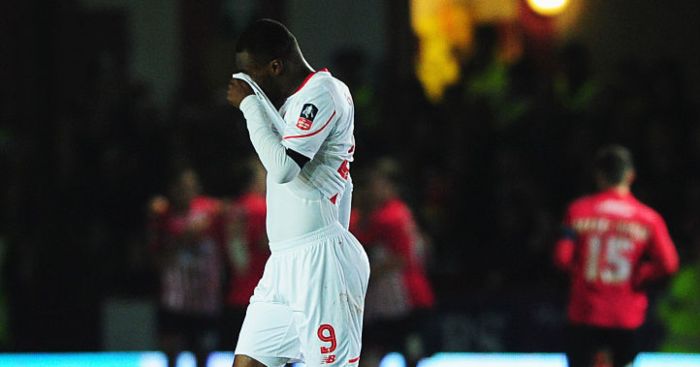 Inspired by the imminent departure of one such man, now is as good a time as any to rank the 19 players that have captained Liverpool once and never again. Thanks to LFChistory for the numbers…

19) Tom Fairfoul (6-3 defeat to Aston Villa, 28/11/1914)
Has a defensive player ever had a better surname? Tom Fairfoul did not score in two years at Liverpool, played in the 1914 FA Cup final and was banned, later to be reinstated, by the FA for his part in the 1915 betting scandal. He was given the Anfield armband in a league meeting with Aston Villa, which the Liverpool Post described as ‘one of the most remarkable games’ ever witnessed on Merseyside, when the hosts ‘blundered badly’ throughout.

18) Rickie Lambert (2-2 draw with Middlesbrough, 14-13 on penalties, 23/9/2014)
Most bands lose their mystique and appeal when they go mainstream. Rickie Lambert and the Beetroot Factory Experience signing up with Liverpool’s major label was no different. The striker himself admitted he “lost something mentally” by joining his boyhood club at 32, and three goals in his solitary season certainly supports that theory. He wasn’t even on the pitch when Liverpool finally scraped a mammoth penalty shoot-out win over Middlesbrough in the 2014/15 League Cup third round.

17) Pedro Chirivella (5-0 defeat to Aston Villa, 17/12/2019)
Jurgen Klopp might have been “completely over the moon” with “probably the best player on the pitch”, but most realised that handing Pedro Chirivella the responsibility of picking heads or tails before kick-off was little more than a token appreciation of the Spaniard’s patience. He was also something of a sacrificial lamb, captaining that 5-0 League Cup quarter-final defeat to Aston Villa last December.

16) Jon Flanagan (3-2 defeat to Southampton, 20/3/2016)
It must have been the actual erection that followed his goal in a 5-0 thrashing of Tottenham in December 2013 that convinced Liverpool of Jon Flanagan’s stiff leadership credentials. How ridiculous to think that he captained a Jurgen Klopp team four years ago. The full-back made just two further Premier League appearances for the Reds after captaining a 3-2 defeat to Southampton that Jordan Henderson and James Milner decided to sit out.

15) Christian Benteke (2-2 draw with Exeter, 8/1/2016)
Michael Edwards is a witch. This much is common knowledge. But his ability to claw back £27m of Liverpool’s £32.5m outlay on Christian Benteke after one disappointing year was the moment he jumped the shark. The Belgian scored ten goals in 42 games, the victim of circumstance as a striker signed by Brendan Rodgers was far too immobile and limited for the approach of Jurgen Klopp. But he did find time for a bicycle-kick against Manchester United, a winning goal against champions Leicester and a game as a captain against Exeter. Not bad, all in all.

14) Sotirios Kyrgiakos (2-2 draw with Northampton, 2-4 on penalties, 22/9/2010)
“I’ll have to give it some thought but there are two possibilities,” said Roy Hodgson in December 2010, scanning a Liverpool squad bereft of Steven Gerrard and Jamie Carragher and considering his captaincy candidates. “Pepe Reina is one, and in some ways he’s the obvious choice, but there’s also Soto Kyrgiakos.” The former would skipper the side 24 times in total; Kyrgiakos led a chastening defeat to Northampton three months prior and would never be given a chance to rectify it.

Kyrgiakos is a bit left-field for choice of captain, but he's a leader from the back. Perhaps suggests he'll play even if Agger fit?

13) Jose Enrique (3-0 win over Exeter, 20/1/2016)
While his only two seasons as a Liverpool regular came in that murky transitional period between Kenny Dalglish’s last and Brendan Rodgers’ first campaigns, Jose Enrique left Anfield in 2016 as a valued and popular professional. Between winning the League Cup, going in net and keeping a clean sheet for the final 13 minutes of a game against Newcastle and captaining a comfortable FA Cup replay win over Exeter, he did it all.

12) Phil Babb (1-0 defeat to Derby, 10/5/1998)
With third place secured, Roy Evans saw fit to give Phil Babb a chance to impress on the final day of the 1997/98 Premier League season. He captained a defeat to Derby at Pride Park, falling at the same hurdle as most mere mortals: Paulo Wanchope. Once the most expensive defender in Britain, Babb won the 1995 League Cup but never really connected on Merseyside, save for with that post against Chelsea in October 1998.

11) Mamadou Sakho (1-1 draw with Bordeaux, 17/9/2015)
The circumstances are truly regrettable, but there is something beautiful about Mamadou Sakho’s last two starts for Liverpool coming in that glorious week in April 2016, when he scored in dramatic Anfield wins over both Borussia Dortmund and Everton. Earlier that season, the centre-half who assisted the slip put in an imperious man-of-the-match performance as captain away at Bordeaux. Was he really Liverpool’s “best defender” when they sold him?

10) Percy Saul (3-2 win over Aston Villa, 1/9/1908)
The only Percy in Liverpool history was, according to a club programme in September 1907, a ‘most erratic’ and ‘remarkably speedy’ full-back whose ‘flashes of great brilliance’ were ‘darkened by a number of unaccountable mistakes’. Alberto Moreno, basically. Saul skippered the Reds once in the last of his three seasons during a relatively low-scoring meeting with Aston Villa.

9) Joe Allen (0-0 draw with West Ham, 30/1/2016)
No team had more players at Euro 2016 than Liverpool, yet few would be able to name the three Reds that progressed furthest in the tournament. Danny Ward and Emre Can joined Joe Allen in the semi-finals as Brendan Rodgers’s illegitimate son earned himself a move to high-flying Stoke a few weeks later. The Northern Irishman clearly believed in either tough love or not being shown to have any favourites, mind, for it was his successor who let Allen have a go behind the wheel before he finally left.

Liverpool have never lost a game when Joe Allen is captain

Is there anything the Welsh Xavi can't do??

8) Curtis Jones (1-0 win over Shrewsbury, 5/2/2020)
“It’s a dream come true,” said teenager Curtis Jones after leading his boyhood club out for the first time this January. Such fantasies presumably involved Liverpool’s actual manager actually managing him but Jurgen Klopp watched from afar as Steven Gerrard’s successor helped the youngest starting line-up in club history overcome League One opposition in the FA Cup. It surely won’t be his last game as captain.

6) Kevin Baron (1-1 draw with Fulham, 1/3/1952)
Lodged between Divock Origi (33) and John Arne Riise (31) on 32 goals for Liverpool is Kevin (de) Baron, whose nine years with the club coincided with their first steps out of the shadows of World War II. He failed to break into the side that won the 1946/47 First Division but was a regular by the time the Reds played their first Wembley final in 1950’s FA Cup defeat to Arsenal. Two years later, he led them out in a draw with Fulham, and two years after that he departed for Southend upon Liverpool’s most recent relegation.

5) Jimmy Melia (0-0 draw with Fulham, 20/4/1963)
Though he would later find critical success with the release of seminal classic Superstar in 2003, Jimmy Melia first completed a decade of service to Liverpool in the 1950s and 1960s. He signed professional forms with the club in November 1954, a matter of months after their relegation to the Second Division, and became an esteemed member of the side Bill Shankly would take to the summit of the English game thereafter. The striker left for Wolves in March of their title-winning season of 1963/64, but had already played enough games to earn himself a medal.

4) Jock McNab (1-0 win over Tottenham, 13/4/1927)
Good lord, that’s Scottish. A Liverpool Echo reporter described Jock McNab as ‘a real hard nut’ who was once sent off for throwing mud at a Newcastle player, and there is probably a reason he remains nameless. The half-back enjoyed a nine-year association with Liverpool that incorporated the club’s third and fourth league championships and a captain’s victory against Tottenham shortly before his departure in 1928.

3) Jan Molby (2-1 win over Apollon Limassol, 29/9/1992)
Both Liverpool and Jan Molby’s best years were behind them by the time the Dane captained a European Cup Winners’ Cup victory over Apollon Limassol in September 1992. The midfielder’s contribution to five major trophies in 12 years at Anfield ranged from seven appearances in an injury-hit title-winning 1987/88 season to an inspirational display in the first all-Merseyside FA Cup final two years prior. He ate all the pies, shook the Kop and out-passed pretty much any opponent he encountered.

Just watched highlights of the 1986 FA Cup Final – Liverpool 3-1 Everton. Jan Molby was absolutely sensational in that game, got 2 assists & also played a part in the 3rd goal aswell. What a player 🔴🇩🇰

2) Gordon Hodgson (drew 0-0 with Derby, 14/3/1931)
Most fans would instinctively wince at the surname but Gordon was no Roy. The striker resides third on a list of all-time Liverpool goalscorers, and fourth in English top-flight history, sandwiched between Dixie Dean and Alan Shearer. He really did deserve more silverware but foolishly timed his birth to mean he played throughout one of Liverpool’s rare genuine barren spells.

1) Elisha Scott (3-1 defeat to Everton, 1/10/1932)
His place of 18th in Liverpool’s list of overall appearance makers rather masks Elisha Scott’s Anfield omnipresence. The goalkeeper played 468 times for the club even after losing four years of his career to the Second World War. Scott remains the club’s longest-serving player ever yet still captained them only once, and that was a bloody Merseyside derby defeat. Sometimes there’s no justice.