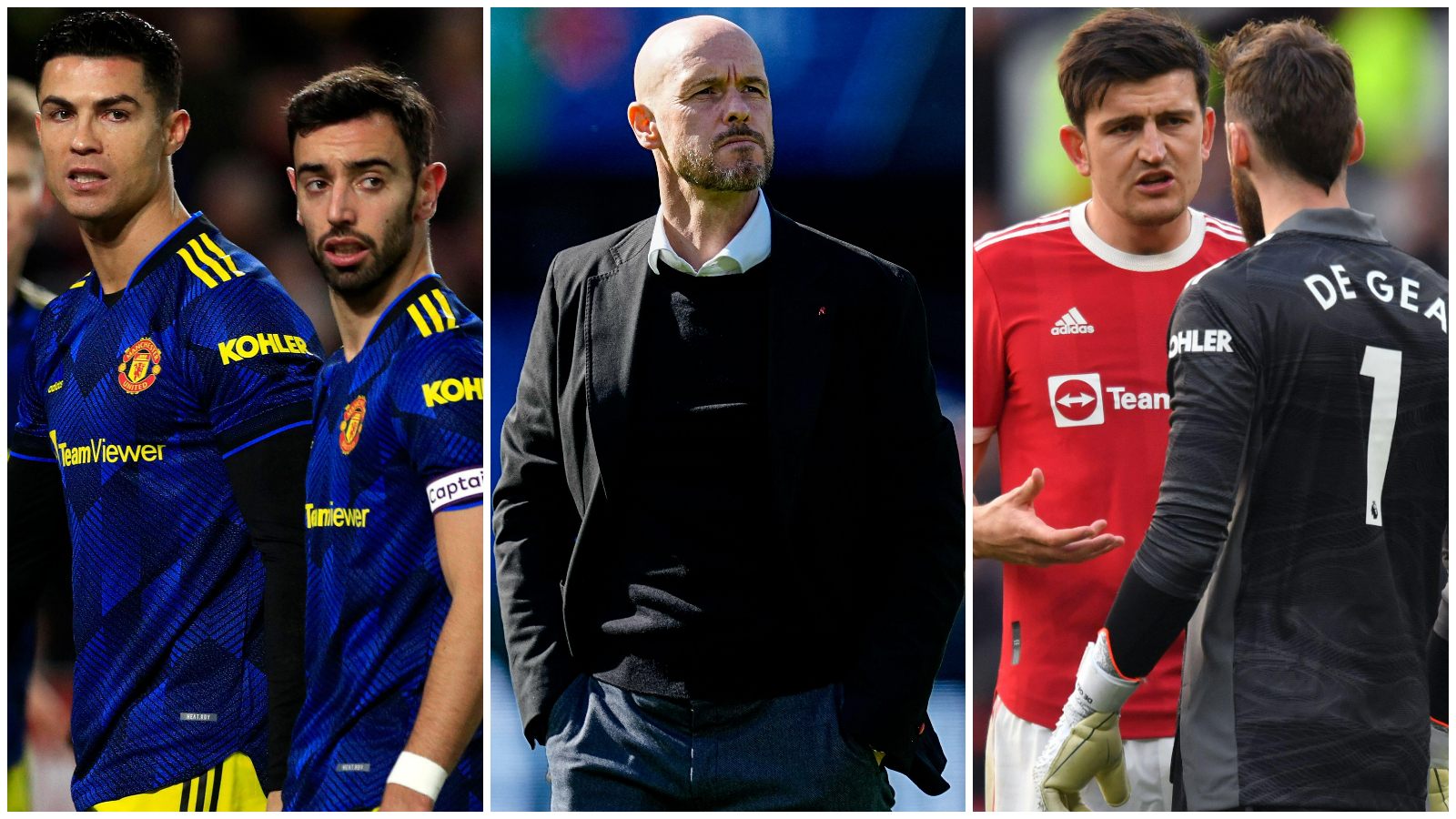 In terms of how pivotal the Man Utd players might be in the mind of the new manager, it’s a Portuguese one-two ahead of a couple of last summer’s signings.

22) Nemanja Matic
Matic, too, will be following those above through the Old Trafford exit door. Ten Hag might at least check in with the Serbia veteran to glean his thoughts on the dressing room, given he’s generally a reliable sort who might have something useful to add.

21) Juan Mata
Mata also might be worth sliding into Ten Hag’s Zoom schedule, even if lovely Juan probably operates on the principle that if you’ve nothing positive to say, say nothing. In which case, it would just be 10 minutes spent staring at the mute Spaniard. Which is never time wasted…

20) Eric Bailly
If Man Utd want a centre-back – never a summer passes these days when they don’t – then we have to assume that Bailly is first in line for the chop since he can’t get near the first team. Unless Ten Hag has a weird penchant for kamikaze defenders who can’t stay fit.

Where might all Man Utd’s players go and for how much?

19) Phil Jones
If Bailly goes, Jones will remain fifth centre-back with the arrival of a new one. Would he take the chance to move on this time? Likely to be deployed as he was by Rangnick and may be useful to break out in case of emergencies, like going to Anfield with an untried and unsuitable defensive formation.

18) Dean Henderson
The only concern with Henderson is on getting him fixed up with a new club before his existence is forgotten outside Old Trafford. Whether a loan or permanent arrangement, the former England keeper needs to go somewhere. Almost anywhere.

17) Tom Heaton
Someone needs to sit on the bench.

16) Aaron Wan-Bissaka
Unless Ten Hag’s system relies heavily on the art of slide tackling, then Wan-Bissaka is probably done for. Though Man Utd need to forget any notion of getting anything like their money back, which is something they’ve been absolutely loathe to do in the past.

15) Alex Telles
Back-up left-back who may well be on his bike this summer when Brandon Williams returns from his loan to serve as Luke Shaw’s stand-in.

Telles has been woeful for months, offers nothing, Brandon Williams is far better

14) Hannibal Mejbri
Kicking a couple of Liverpool players was enough to stand out last week but Hannibal will need to show a bit more in pre-season under Ten Hag. There is the expectation, though, that the Tunisia midfielder will be able to do that, along with James Garner and Alejandro Garnacho; each needs to demonstrate their readiness to step up to the first-team squad.

13) Victor Lindelof
Likely to be relegated to fourth centre-back by the time the new season rolls around. Ten Hag will most likely be as content to have trouble-free Lindelof in his squad as he would be to see him leave.

12) Anthony Elanga
The Man Utd youngster has had a good run in the side since Rangnick took over, mainly because the interim boss sees him as a player he can trust to carry his basic instructions while the rest seem to do their own thing. That reliability will go down well with Ten Hag but Elanga will have to justify his place in the side beyond simply doing what he’s told.

11) Diogo Dalot
Currently United’s first-choice right-back and with so many other issues to address in the team, likely to remain as such.

10) Luke Shaw
Shaw’s standing in the Man Utd squad only ever feels 10 minutes from lurching dramatically in the opposite direction, so it will be fascinating to see firstly what view Rangnick passes on to Ten Hag and what initial conclusion the new manager draws for himself. Will start Ten Hag’s reign as first-choice by default.

9) Marcus Rashford
Man Utd have held on to players for too long in the past but to sell Rashford this summer would be premature, even if he has had an utterly wretched season. From Ten Hag’s perspective, hopefully a summer of rest and a new regime will reignite the spark in Rashford, who must up his game and pull himself out of his funk. The emphasis is on him, although Man Utd are obliged to provide a better platform for their child-feeding academy graduate.

8) Harry Maguire
One thing is for sure: despite the best efforts of some Man Utd followers, Maguire is going nowhere. Whether he remains club captain is for Ten Hag to decide but the England centre-back will still be at Old Trafford next season. And he deserves the opportunity to atone for this season’s clusterf*ck. With the likely arrival of another centre-back and ideally more influence from Varane, Maguire needs to work with the new manager to rediscover some form and fast. Ten Hag won’t stand for the performances the skipper has turned in lately.

7) Fred
The Brazilian has been United’s best midfielder this season, which admittedly is a sparse field in which to stand out, but Fred will be there on the first day of pre-season desperate to impress the new manager. Like Donny van de Beek.

6) Scott McTominay
Take your pick over which of the many reports you choose to believe but one suggested McTominay is one of five first-team regulars whom Ten Hag is keen to work with and improve. The midfielder spoke for most Man Utd fans on Saturday when he urged his teammates to “show a bit of balls” and his attitude will doubtless endear him to the new manager.

5) David De Gea
Reports suggest Ten Hag has some concerns over De Gea’s suitability to his style of play – evidently the Dutchman prefers a keeper whose feet aren’t nailed to his goal-line – but given the length of his to-do list, replacing United’s Player of the Season is way down the manager’s priorities.

4) Raphael Varane
At times this season, we’ve had to wonder what Champions League Varane has made of it all at Old Trafford. He certainly didn’t sign up for this sh*t. But nor has he really set a better example, having started only half of United’s Premier League games. As he showed in the opening minutes against Arsenal, he’s not immune to the odd brain fart either. After a false start, Ten Hag needs Varane to offer the quality and leadership he was signed by Solskjaer to provide.

3) Jadon Sancho
The £72million winger has fallen way below expectations this season – he’s in good company in that regard – but Sancho has shown the necessary signs of improvement in patches and the overwhelming feeling is the winger will shine under Ten Hag next term.

2) Cristiano Ronaldo
Many new managers look to make a big statement early in their reign but a power play involving Ronaldo would be foolish indeed if the 37-year-old is intent on staying and building a relationship with Ten Hag. The Portuguese superstar remains United’s top scorer and while he may be in the twilight of his career, that is not reason enough to bin him, especially when he appears a long way from being finished. And Ten Hag, despite having a reputation for playing youth, appreciates a veteran, which is evidenced by the importance of Daley Blind and Dusan Tadic at Ajax. It is up to Ten Hag if and how he wants to use Ronaldo, but to suggest he is anywhere near the top of the club’s list of problems is ludicrous.

🥴 Cristiano Ronaldo's goal contributions in the Premier League this season (19) have been worth 15 points to Manchester United. Without them, they would only be 10 points above the bottom three pic.twitter.com/zuizstJsjT

1) Bruno Fernandes
United’s best and most important player. Sure, he moans a lot, but who wouldn’t in this side? At least Fernandes has shown some spark, unlike so many of his current teammates. Ten Hag will build around Fernandes and give the Portuguese the platform to rediscover his very best form.