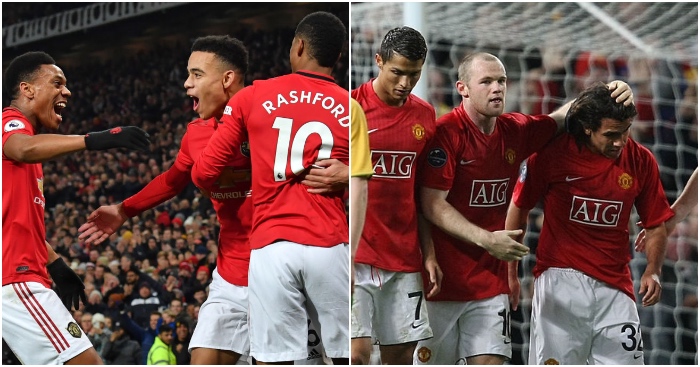 Ole Gunnar Solskjaer has warned Manchester United trio Anthony Martial, Marcus Rashford and Mason Greenwood to improve or they will be replaced. He said:

“If you think you’ve got a divine right to be playing every game and doing so well that we’re not going to look for players to replace you, you’re in the wrong place. I’ve been here for so many years myself as a striker and Teddy Sheringham comes in, Dwight Yorke comes in, Ruud van Nistelrooy comes in, Wayne Rooney comes in.”

It was an impressive show of strength from Solskjaer and a nice hint at the ‘United DNA’ without being nauseatingly explicit. But how do the current strikers match up against those from other seasons? Here is every Premier League season ranked from least to most prolific using the goals of the top three strikers.

26) 2014/15: Wayne Rooney (12); Robin van Persie (10); Radamel Falcao (4) – 26 goals
Radamel Falcao failed to live up to expectations in his debut Premier League season, but he did at least contribute five assists. The Louis van Gaal years were not giddy years.

25) 2016/17: Zlatan Ibrahimovic (17); Marcus Rashford (5); Wayne Rooney (5) – 27 goals
Jose Mourinho attempted to remedy United’s lack of goals by signing legendary striker Zlatan Ibrahimovic. He did his damnedest but was let down by his teammates and they finished sixth.

1) 2007/08: Cristiano Ronaldo (31); Carlos Tevez (14); Wayne Rooney (12) – 57 goals
An astounding year for Cristiano Ronaldo and United as a whole, as the Red Devils pipped Chelsea to the Premier League title and rubbed salt in their wounds in Moscow to claim the Champions League.