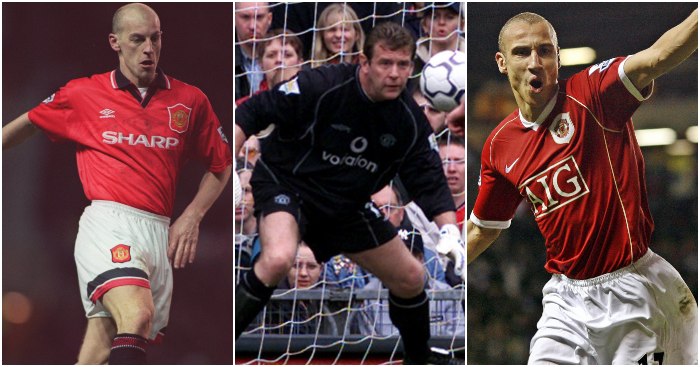 Man Utd are said to be looking for a couple of loan players this month. Their track record of borrowing players in the Premier League era isn’t great…

9) Andy Arnott (Gillingham)
The internet tells us Arnott was a former Gillingham striker who joined United just before the start of the first Premier League season in 1992. He played in the pre-season Blue Star tournament in Switzerland, scoring two goals while United reached the final.

But Arnott was packed off back to Gillingham, where he scored 12 goals in 73 games before flitting around the lower regions of the Football League. So now you know.

8) Andy Kellett
“He thought I was winding him up,” said then-Bolton boss Neil Lennon of Kellett’s reaction to being told he was going to United for the second half of the 2014-15 season. That sentiment was shared by United fans too, after the initial ‘who the f*ck is Andy Kellett?’.

The answer to that question was a 21-year-old left-back who had started only one game for Bolton which was brought to an abrupt end 51 minutes into a heavy defeat to Rotherham.  Kellett played nine times for United’s Under-21s as they won the U21 Premier League title.

7) Fraser Digby
The goalkeeper served his apprenticeship with United under Ron Atkinson before moving on to Swindon as an 18-year-old. Eight years later, after being dropped by Glenn Hoddle at Swindon, the call to come back came in from Sir Alex Ferguson, who needed cover for Peter Schmeichel in the first year of the Premier League.

Digby stayed for a couple of months and sat on the bench while United put together a winning run which formed the basis of their first league title in 26 years. Digby had departed United again by then but he was back in the Premier League to face United the following season after earning a recall at Swindon and helping them win promotion via a thrilling 4-3 play-off final win over Leicester.

6) William Punier
The French defender often comes up in Fergie’s worst XI features, which is harsh since the centre-back hardly disgraced himself during a trial month at Old Trafford.

Prunier was invited to spend Christmas with the Red Devils in 1995 when Gary Pallister and Steve Bruce were both sidelined. When David May became injured too, Prunier made an impressive debut against QPR at Old Trafford. His second appearance saw a depleted United defence – which also lost Denis Irwin and Peter Schmeichel – concede four at Tottenham.

Prunier was unfairly ridiculed, with the Telegraph describing him as ‘not looking like a Championship-winning centre-hal’”. Ferguson disagreed and offered Eric Cantona’s mate a three-year deal, but according to Prunier: “There were a lot of protagonists involved and they couldn’t find an agreement.”

5) Andy Goram
“Goalie, I want you to come down for three months on loan,” Ferguson told the 36-year-old in a phone call in March 2001. “Fabien Barthez is injured and Raimond van der Gouw is injured. We’ve got Bayern Munich on Wednesday and Liverpool at the weekend.”

“F*ck off!” came Goram’s reply, believing he was being stitched up by his mate, Ally McCoist. Fortunately, Ferguson rang back and spoke to Goram’s partner: “Miriam, this is Alex Ferguson, and you can tell that fat bastard he’s got ten seconds to say aye or naw.”

Goram, whose loan spell made Motherwell £100,000, wasn’t required to face Bayern or Liverpool, but he made his debut against Coventry on the weekend United wrapped up another league title. He was substituted in a pre-planned move to ensure Van der Gouw qualified for a league winner’s medal, and the same happened a month later when Goram lined up against Southampton at the Dell.

In 2000-01 Man Utd's second biggest signing was a 36-year-old Andy Goram. On loan. From Motherwell. pic.twitter.com/Zi4faUdsVP

4) Radamel Falcao
Louis van Gaal’s first transfer window ended with the most exciting signing of the lot. Falcao, the ex-Porto predator, joined on deadline day on a season-long loan from Monaco which cost United £6million.

Unfortunately, United didn’t get the Porto goal machine, they signed a striker still searching for his touch after a serious knee injury. He scored four goals during his season at Old Trafford and at times it was hard to watch the Colombia star. Not because he was bad; rather because he was clearly trying so hard to recapture his previous devastating form. But a lack of fitness and Van Gaal’s tactical approach were never going to allow him to do that at Old Trafford.

United opted against signing Falcao on a permanent basis, and a similar loan spell at Chelsea the following year vindicated the decision.

3) Tomasz Kuszczak
United felt the West Brom keeper could be the successor to Edwin van der Sar when they brought him from West Brom, initially on a season-long deal which involved Luke Steele and Paul McShane going in the opposite direction. “Tomasz will be a Manchester United player for the next four years,” explained David Gill. “He has come to us on loan for the first year, and then will join us permanently in July 2007.”

The plan was for the Pole to learn from the master before eventually being handed the gloves. But Kuszczak never rose above the rank of deputy. He spent five seasons around the United first team, averaging six Premier League appearances per season, never proving himself as more than an adequate stand-in.

His stay at United ended on a sour note when, frustrated by Ferguson refusing to sanction a loan move to Leeds, Kuszczak said: “I told him I want to play and get back into the national team, because Euro 2012 is just around the corner, but it seems he doesn’t care… I’ve become a slave to Manchester.”

2) Carlos Tevez
United took Tevez on loan for a couple of seasons, though it was always a murky matter over who they were borrowing him from. The Argentina star arrived from West Ham but his rights were owned by a third party, Media Sports Investment fronted by cuddly Kia Joorabchian.

Tevez thrived at Old Trafford, at times forming a front three with Cristiano Ronaldo and Dimitar Berbatov that was the envy of Europe. He scored 34 goals in 99 appearances but for Tevez he was too often the odd man out. There were plenty of grumbles about his status long before he left Old Trafford in 2009, when Manchester City stumped up the money required to satisfy MSI.

Ferguson said later that United didn’t cough up because Tevez told them he intended to retire in four years, so there would be no re-sale value. Tevez claims United never put on terms on the table despite promising to do so. So he went to City and won the league again, all the while causing Roberto Mancini no end of grief.

1) Henrik Larsson
How United could do with Larsson now…

At the start of 2007, with injuries to Ole Gunnar Solskjaer and Alan Smith leaving Wayne Rooney and Louis Saha as United’s only fit strikers, Ferguson went to Helsingborgs to see if 35-year-old Henrik Larsson fancied keeping busy during the Swedish off-season.

“On arrival, he seemed a bit of a cult figure with our players,” said the manager after the striker returned home. “They would say his name in awed tones. Cult status can vanish in two minutes if a player isn’t doing his job, yet Henrik retained that aura in his time with us. He’s been fantastic, his professionalism, his attitude, everything he’s done has been excellent.”

Larsson kept his word to return to Helsingborgs – but he later regretted it. “I should’ve stayed, as it would have meant I got a Premier League winner’s medal, and I would have stayed for one more season,” he told FourFourTwo a decade later. “But I still had a contract with Helsingborgs and I feel that when you sign a contract, you have to see it out.”

#OnThisDay 12 years ago, Henrik Larsson made his #MUFC bow…

…what a way to announce yourself to the Stretford End faithful! 💥 pic.twitter.com/sgDA0NxpTe