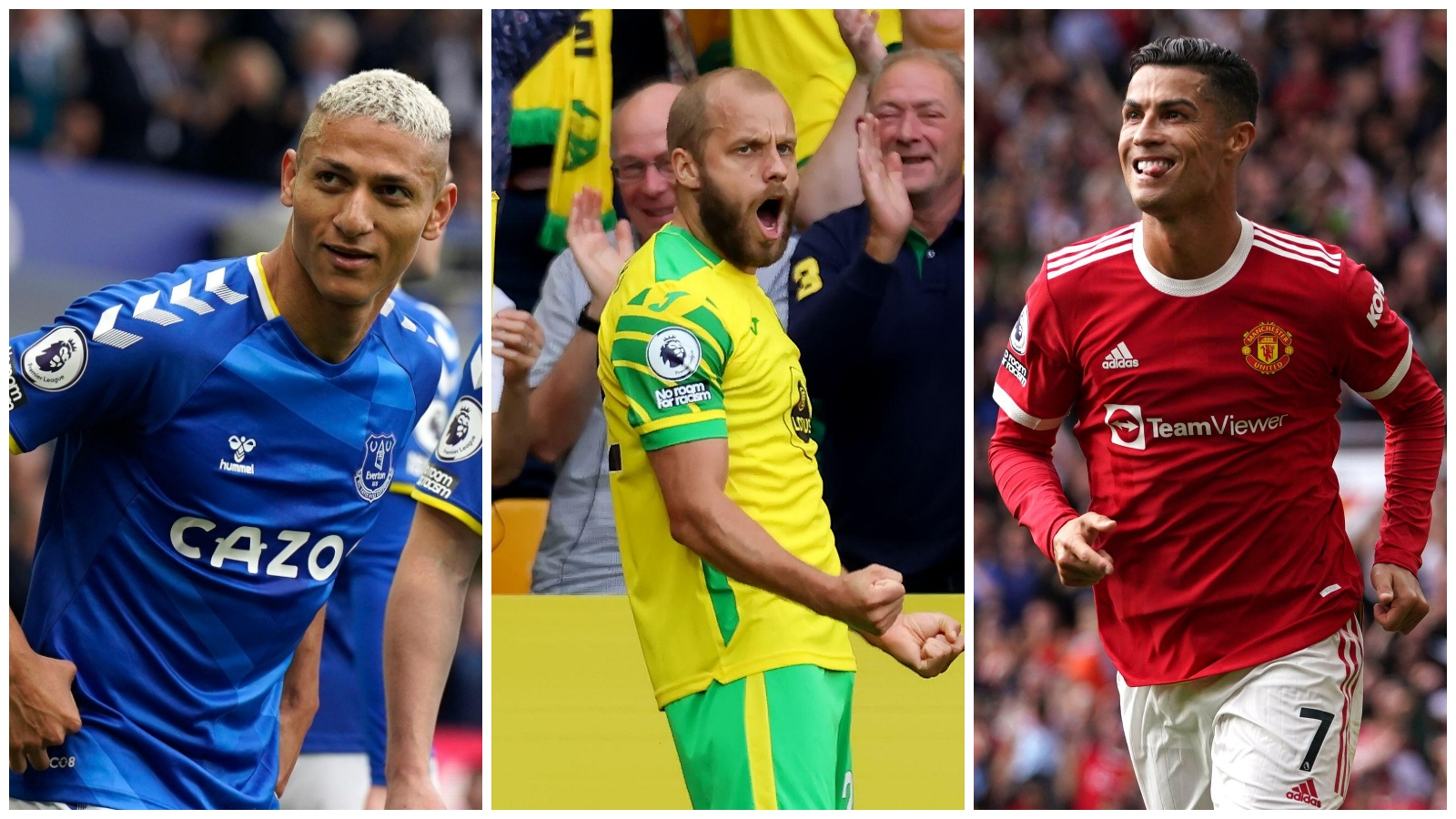 Some teams equally dish out the goals, meanwhile, others are carried by a single goalscorer. We have created a ranking of Premier League teams by working out what percentage of goals their top scorer accounted for this season.

20) Chelsea – Mason Mount (14.4%)
Thomas Tuchel’s side scored the third-most goals (76) in the Premier League this season, but did not have a consistent goalscorer. They won last season’s Champions League without an out-and-out striker, but opted to bring one in by smashing their club-record transfer fee for Romelu Lukaku. Much to our dismay, he struggled greatly as Mason Mount ended the season as the club’s top league scorer with 11 goals.

19) Manchester City – Kevin De Bruyne (15.15%)
From third-most to the most overall, Manchester City found the back of the net 99 times in the league as they retained the title. They shared the goals nicely as Pep Guardiola often used a false-nine before Gabriel Jesus’ run-out at the end of the campaign. Kevin De Bruyne was their top scorer with 15 after he netted four at Wolves earlier this month.

18) Wolves – Raul Jimenez (15.7%)
Speaking of Wolves, excluding the relegated teams, they scored the least amount of goals in the Premier League this season with 38. Raul Jimenez didn’t have a great campaign as he led the scoring charts for the Molineux club with six in 34.

17) Arsenal – Bukayo Saka (18.03%)
Emile Smith Rowe was Arsenal’s top scorer for much of the season, but with his minutes limited in the second half of the season, Bukayo Saka finished as the Gunners’ top league scorer with 11. Arsenal scored 61 in total, with centre-half Gabriel finishing as their fifth-top scorer in 2021/22.

16) Newcastle – Callum Wilson (18.1%)
Despite missing a chunk of the season through injury, Callum Wilson finished as Newcastle’s top scorer with eight goals, accounting for a little over 18% of his side’s 44 Premier League goals this term.

15) Brighton – Neal Maupay/Leandro Trossard (19.04%)
Brighton had two players finish with eight league goals. Neal Maupay hit the ground running with four in his first six games before scoring three in as many games in December. One goal since the turn of the year allowed him to be caught by Leandro Trossard, who scored the same percentage of Albion’s 42 league goals as the French striker.

I guess you’re as good as your best goalscorer…

13) West Ham – Jarrod Bowen (20%)
Jarrod Bowen had an outstanding season and recently earned himself a maiden call-up to Gareth Southgate’s England squad. The 25-year-old’s 12 goals accounted for exactly 20% of West Ham’s 60, and with 10 assists also to his name, Bowen contributed towards an impressive 36.6% overall.

Harry Kane is the only English player with more Premier League goal contributions than Jarrod Bowen this season 🏴󠁧󠁢󠁥󠁮󠁧󠁿 👏 pic.twitter.com/IUMTIoxOSI

=11) Everton – Richarlison (23.2%)
Everton will play Premier League football next season and their safety is hugely down to Richarlison’s goals during squeaky bum time. The Brazilian netted 10 in 30, including six in his last nine games of the campaign. The Toffees scored 43 in total, conceding 66.

=11) Southampton – James Ward-Prowse (23.2%)
With the same number of goals scored as Richarlison and Everton, James Ward-Prowse and Southampton also scored 10 and 43, respectively. Four of the England midfielder’s goals came from the penalty spot, while he scored another four from free-kicks as he captained the Saints to a 15th-place finish.

10) Leicester – Jamie Vardy (24.1%)
Jamie Vardy had an excellent season and his lengthy absence from Brendan Rodgers’ side was very noticeable. He averaged 0.6 goals per match as he found the back of the net 15 times in 25 appearances. Despite struggling all season long, Leicester scored 62 goals and picked up 52 points as they finished eighth.

9) Liverpool – Mohamed Salah (24.4%)
Golden Boot winner, Mohamed Salah, scored 23 goals this term and provided 14 assists as he also won the Playmaker Award. His goals accounted for over 24% of Liverpool’s 94 Premier League goals, and to be in the top half of this list given the Reds’ incredible scoring record is a testament to the season Salah had.

We’re not done yet. pic.twitter.com/IiBuC0d9WN

8) Brentford – Ivan Toney (25%)
Ivan Toney scored a quarter of Brentford’s 48 Premier League goals. The 26-year-old striker also provided five assists as his side finished 13th. Not too bad for his first season in the top flight.

7) Leeds – Raphinha (26.1%)
It was a rough campaign for Leeds as they scored 42 goals, but conceded a whopping 79. Raphinha had an excellent first half of the season as the threat of relegation didn’t seem too daunting at Elland Road. But the dried up as he only scored three times since January. Thankfully one of his 11 goals came on the last day as Leeds won at Brentford to avoid the drop.

6) Burnley – Maxwel Cornet (26.4%)
Maxwel Cornet’s goals were not enough to keep Burnley in the division as they were relegated on matchday 38 following a 2-1 home defeat to Newcastle. The Clarets scored 34 in total as Cornet bagged nine times.

5) Crystal Palace – Wilfried Zaha (28%)
Ex-Manchester United forward Wilfried Zaha scored nine goals from open play and five from the penalty spot as he thrived under Patrick Vieira to score a career-high 14 goals in a league campaign. Crystal Palace’s 50 goals was more than the three sides (Newcastle, Wolves, Brighton) that finished directly above them.

Great but difficult season filled with loads of up and downs but overall wouldn’t of had it any other way 🙏🏿 thank you for the amazing support home and away because you really kept us going ❤️ pic.twitter.com/DKoVaQkb6J

4) Watford – Emmanuel Dennis (29.4%)
Emmanuel Dennis was one of the signings of the season, having scored 10 goals after a £3.6m move from Club Brugge. Watford were unfortunately relegated after, like Burnley, scoring just 34 league goals. Only Norwich scored less.

3) Manchester United – Cristiano Ronaldo (31.5%)
When the F365 crew predicted a top-four finish for Manchester United, this is what we meant. Cristiano Ronaldo’s 18 goals in the Premier League was 31.5% of the Red Devils’ 57. Despite his solid goalscoring season, many people will still try to push the agenda that the Portugal captain is the main problem at Old Trafford.

2) Tottenham – Heung-min Son (33.33%)
Heung-min Son scored as many goals as Norwich this season. And he didn’t score a single penalty, in case you didn’t know already!

He scored 23 of Spurs’ 69 in the Premier League. Add Harry Kane’s goals to Son’s and make that 57.9%. Now Spurs need to spend on a few players to help out.