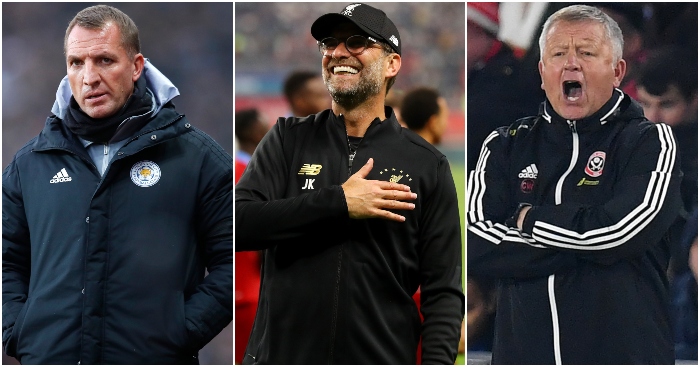 Twenty-nine different men took charge in the Premier League this season, and not all of them for Watford. Some were good, some were bad, all the rest were in between. Here are the official rankings.

29) Javi Gracia (Watford, August-September)
Three defeats and a draw saw him gone way, way back at the start of the Before Times.

28) Hayden Mullins (Watford, July)
Lost three of his four Premier League games in caretaker charge. Technically still in charge for the goalless draw with Palace in December, and nobody can ever take that away from him.

27) Quique Sanchez Flores (Watford, September-December)
Did manage to win a game, but only the one and it was against Norwich.

26) Manuel Pellegrini (West Ham, August-December)
Was he there this season? Did that happen? Can you even remember a single thing about Pellegrini being West Ham manager this season? Liar.

25) Daniel Farke (Norwich)
Nice fella. Surprisingly softly spoken. His team were mainly terrible, but that itself almost seemed to be part of a plan.

24) Eddie Howe (Bournemouth)
At the precise moment that everyone stopped predicting Bournemouth’s demise, along it came. Howe is now at a crossroads. He might actually still be the next Tottenham manager, but that’s no longer the compliment it once was.

23) Marco Silva (Everton, August-December)
Look, we don’t like it any more than you do, but we’re going to have to accept that Paul Merson was right. Gutting.

22) Unai Emery (Arsenal, August-November)
FUN FACT: Arsenal actually won their first two league games of the season. This season really has been going on for a decade.

21) Duncan Ferguson (Everton, December)
A giddy freewheeling victory over Chelsea seemingly powered entirely by Ferguson’s own chaotic energy was a wonderful antidote to the dog days of Marco Silva’s doomed reign, and was followed by a couple of creditable draws against Manchester United and Arsenal. Can’t argue with the results.

Duncan Ferguson LOVES being Everton manager and his passion shows in this brilliant post-match interview! 👏🔵 pic.twitter.com/Rxu92fgv9R

20) Freddie Ljungberg (Arsenal, November-December)
The former Invincible managed to not beat Norwich and also lose at home to Brighton in his short caretaker stint, as well as squeezing in one of Arsenal’s traditional twice-yearly capitulations against Manchester City.

19) David Moyes (West Ham, December-July)
Came home and, just like last time, did precisely the job required and not a scrap more, all in the dourest way imaginable.

18) Dean Smith (Aston Villa)
All turned out fine in the end. Suppose Villa deserve some credit for holding their nerve but not really sure Smith truly expected to take eight points from the last four games any more than we did. Three teams being even worse is grand, but 35 points is still a pretty crappy number of points after spending all of the money.

17) Mauricio Pochettino (Tottenham, August-November)
For all he did at White Hart Lane and Wembley and White Hart Lane 2.0, the fact balder than Daniel Levy’s head is that Poch’s last 24 league games brought just 25 points. Plenty of bad decisions and mistakes were made by plenty of people in the years leading up to Pochettino’s dismissal, but it’s hard to argue with that final decision itself. And we would really like to try.

16) Nigel Pearson (Watford, December-July)
Dragged Watford kicking and screaming out of the relegation zone and then right back into it before being mysteriously sacked two games from the end of the season. Forearms were among the early breakout stars of Project Restart. Watford’s least bad manager of the season, which is actually a thing.

15) Steve Bruce (Newcastle)
As soon as the boffins have sorted the rona, they’ll turn their attentions directly to puzzling out the inexplicable numbers behind Newcastle somehow finishing safe as houses in mid-table.

14) Carlo Ancelotti (Everton, December-July)
One of the most decorated managers in football history, but his PPG stats make him a less-good Everton manager than Duncan Ferguson. These are facts.

13) Roy Hodgson (Crystal Palace)
Been there nearly three years now, just sort of plugging away and carrying on. Will probably be second favourite in the sack race at the start of next season (and we will predict his departure again) but will no doubt bury us all.

12) Graham Potter (Brighton)
On raw numbers, simply turned five defeats into draws. But in all other ways, has done so much more. Incidentally, Brighton have now survived for three years in the Premier League without ever winning 10 games in a season, which seems pretty wild.

11) Mikel Arteta (Arsenal, December-July)
It might say more about Arsenal’s fall than Arteta himself, but the fact the fans are not only still onside, but actually quite optimistic after the club’s worst season in 25 years, is quite something really. Maybe there was no way of improving results without first improving the mood. Arteta has done that first part; the second may be even tougher.

Arteta gives so much Hope!

– All games he has lost are due to individuals errors not his tactical mistakes.

He has proven he’s the man for the job and imagine if he was appointed 2years ago instead of Unai Emery 🤦🏽‍♂️🤦🏽‍♂️!

The Board must Support him in getting players.

10) Jose Mourinho (Tottenham, November-July)
“Fourth in a table since I took over” is becoming something of a “two points from eight games” de nos jours. Inevitably, Jose does have a kernel of a point underneath all the pantomime, and Spurs’ results did undeniably improve after his arrival even if it was largely joyless and with little evidence of a meaningful long-term plan (‘be c***s’ isn’t a plan). Mourinho’s catchphrase also ignores the fact that Spurs twice had the chance to move into the actual top four under Mourinho by beating Chelsea and turned in two piss-poor insipid performances to lose both games.

9) Ralph Hasenhuttl (Southampton)
Enhancing your reputation in a season that features a 9-0 thrashing is quite something. Southampton not sacking him after that is definitely going to be a thing that gets mentioned every time a struggling manager gets thrashed from now on, so look forward to that.

8) Pep Guardiola (Manchester City)
Lost an awful lot of games and has never looked under more pressure in domestic football. Can European knockout glory ride to the rescue?

7) Frank Lampard (Chelsea)
Disappointing in a way, because Lampard has proved neither a supreme Chelsea alchemist nor hilarious hubristic flop. But no. He’s just been a perfectly competent manager who has completed an entirely acceptable first season as Chelsea manager. Has revolutionised the post-match interview, mind.

6) Sean Dyche (Burnley)
Theory: Nick Pope is Sean Dyche’s muse. Burnley’s Premier League finishes since their most recent promotion are 16th, 7th, 15th and 10th. In two of those seasons, Pope was in nets.

5) Ole Gunnar Solskjaer (Manchester United)
Still a strange one, really. Finishing third? As good as anyone could realistically expect. Finishing 33 points behind Liverpool? Hmm. Still needs to find a fully functioning defence and is already being positioned for a fall with daft concocted talk of title tilts next year.

4) Nuno Espirito Santo (Wolves)
Finishing below Spurs is disappointing. Says a lot about where Wolves are now, given where they have been.

3) Brendan Rodgers (Leicester)
Oh, Brendan, fly not too close to the sun, lest your waxen wings melt.

2) Chris Wilder (Sheffield United)
Probably deserves wider recognition than he’ll get for his remarkable efforts with Sheffield United this season. Perhaps because he looks and sounds like an old-school proper English manager like they used to have but has very modern and foreign ideas about tactics and such. As a result, is hailed by neither hipster nor PFM.

1) Jurgen Klopp (Liverpool)
Didn’t get 100 points, did do pretty much everything else. The scale of Liverpool’s dominance has been so clear for so long that it’s easy to forget just how mad it really is. They’ve got some lovely players, but would they be as good under any manager is the question. And no is the answer.