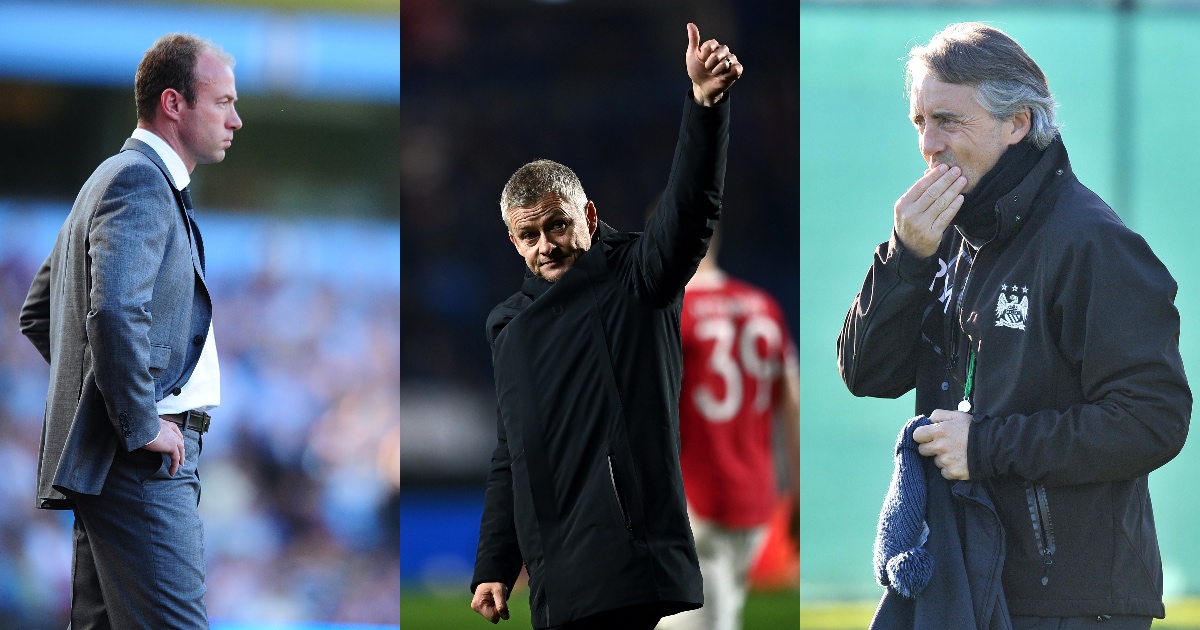 Steven Gerrard has become the latest Premier League player to return to the top flight as manager. There have been a lot (he says without a shred of bitterness at this taking far, far longer than first assumed), and the overwhelming majority have found limited success in swapping their boots for a notepad.

We’ve included their Points Per Game ratios as Premier League managers, but the ranking is entirely opinion based as our views are correct and final.

He once told off a young upstart by the name of Jack Grealish to stop smiling and ran the club “like an army base”, according to Gabby Agbonlahor. He won just two of his 20 games in charge.

“‘That’s a good f—— start!’ I thought,” Shearer said, using the players’ training tardiness as evidence of their poor attitude. One win and four goals in eight games when you have Mark Viduka, Michael Owen, Obafemi Martins and Shola Ameobi to call on suggests the management wasn’t all that great either, Alan.

Jokanovic saved Fulham from Championship relegation before getting them promoted the next season. The club then spent £100m in a Football Manager summer of transfers, before sacking him four months into his debut Premier League campaign.

One of the great Premier League players managed just two wins from his 16 games in charge of Portsmouth. And this is inexplicable…

Just WHAT was Tony Adams doing in that training session?! He explains all!

Why on earth would you go on Soccer AM?

Six months as a Premier League player and just two months longer as a manager.

Brought Palace up to the Premier League, but even 21 goals from love child Andy Johnson couldn’t prevent immediate relegation. Sacked by Charlton with them in the relegation zone and failed to keep Hull up in his brief spell in charge.

Now assistant to Italy boss Roberto Mancini, Lombardo was handed the reins as player-manager for Palace’s final seven games of the 1997-98 season after Steve Coppell decided to swap the dugout for the office of director of football. Unsurprisingly, seeing as Lombardo had no managerial experience whatsoever, Palace lost five of those seven games and were relegated.

Sanchez left his post as Northern Ireland boss to take over at Fulham, keeping them in the Premier League with a massive win over Liverpool before being shown the door in December with them in the relegation zone.

Took Cardiff to the League Cup final and the Premier League, but was sacked midway through his one and only top-flight season.

Lasted just six months in charge of Blackburn in 2008, winning three of his 17 games. But he gets all sweary when you ask him about Solskjaer, so kudos.

Led the Foxes to the promised land in 2003 before taking them straight back down.

His Fulham side played some decent stuff last season but found the net far too rarely. Clearly a decent tactician and will be back soon. Next season, probably.

Has there ever been a boss whose look encapsulates the club they manage more than Nigel Worthington? The guy screams East Anglia. Norwich were relegated in his only Premier League season.

12th in his first season and relegated the next, England’s most successful manager since Sir Alf Ramsey has plenty to prove in club management.

Niall Quinn, chairman of Sunderland in Keane’s time at the helm, claimed the Manchester United legend resigned as he couldn’t handle the intensity of the job. Ironic given we’re all now lumbered with the most intense man in the history of football punditry.

Led both Blackpool and Palace to the Premier League. But whatever, here are his thoughts on Cristiano Ronaldo…

“He’s six foot something, fit as a flea, good looking – he’s got to have something wrong with him. Hopefully he’s hung like a hamster – that would make us all feel better. Having said that, my missus has got a pet hamster at home, and his cock’s massive.”

Sunderland looked dead and buried before a remarkable 13 points from a possible 15 under Poyet’s watch saved them in 2014.

Zola led the Hammers to a top-half finish in his first top-flight season, before leaving at the end of the second campaign after they just avoided relegation.

His passion is such that his heart regularly slips from his sleeve and lies beating in his hand, until he throws it at someone. The referee-pusher turned touchline maniac beat rivals Newcastle in his second game in charge and kept the Black Cats up, before being sacked five games into the following season.

His assertion that he is flexible enough to get his head in the sand, while the ostrich of a journalist is not is undoubtedly his Premier League legacy. Made way at Leicester for a certain Claudio Ranieri.

Player-assistant manager turned player-manager at Barnsley (Ahh, simpler times), Wilson earned Barnsley promotion before they went straight back down. But he was handed the Wednesday job where he secured mid-table security before being sacked with the side on the up.

Pearce was in charge when some money came into Man City, but before the real bunse turned up. The club narrowly missed out on European qualification and avoided relegation in his time at the helm.

“They love homegrown players at Liverpool. Tottenham fans like signings,” said Sherwood as Harry Kane watched from the bench ahead of scoring 31 goals in his next season. He led Spurs to sixth and Villa to the FA Cup final, but it’s impossible to shake the feeling he was blagging his way throughout.

Has managed exactly 1000 games of football because the Newcastle owners wanted to roll him out for one last afternoon of abuse at St James’ Park. He may not return to management and we don’t blame him.

Hard to place but did a more than serviceable job in very difficult circumstances for Spurs last season. Still a (very) young man – he’ll be back.

An exciting, effective footballer, he left most of the effectiveness behind in management, trading it for all that karma bullsh*t.

With the help of 30 goals from Kevin Phillips, Reid led Sunderland to seventh in 2001, before joining Leeds, who he managed to keep up in pretty dire financial circumstances.

You can keep your Thomas Tuchels, this mid-season Chelsea appointment won the Champions League and FA Cup.

The late, great Wilkins led QPR to eighth after he took over as player-manager before they were relegated in his first full season. A fantastic footballer, an excellent coach and a wonderful human being…

Today would have been Ray Wilkins’ 64th birthday.

This incredible call always reminds us of what a true gent Ray was.

We miss you, Butch. pic.twitter.com/YOJAeOlXKW

Became the youngest Premier League manager when he took the Fulham gig in the summer of 2003 and led them to a surprise ninth-placed finish in his debut campaign.

Achieved West Ham’s record Premier League points tally in 2015-16 before David Moyes broke it last season. Brought West Brom up (who wouldn’t?) before being sacked and replaced by relegation specialist Sam Allardyce, whose attempt to avoid relegation may have brought a sweet, sweet end to the obsession with relegation specialists.

Did a job (a decent job) as a returning club legend, reached the limit of his capabilities and was shown the door. Makes sense – no hard feelings.

Did a job (a decent job) as a returning club legend, reached the limit of his capabilities and yet remains in charge of the biggest club in the world. Makes no sense – hard feelings present, more to come.

Led the Baggies to their record Premier League points tally of 49 in the 2012-13 season as they finished eighth. Romelu Lukaku also did a fair bit of the leading with 17 goals and seven assists.

He’s not yet the Messiah, but he’s more than Pep Guardiola’s naughty boy.

Won the FA Cup as player-manager of Chelsea in 1998 and their highest Premier League finish of fourth. Then moved to Alan Shearer’s Newcastle and decided to bench the club’s favourite son.

‘Aren’t you putting your boots on Gaz?’ ‘It’s Gaffer to you now, son.’ We assume it went something like that, as Monk hung those boots up and grasped the managerial reins. He dragged Swansea to safety in his first season and led them to eighth the following season. He was sacked the next year after one win in 11.

Strachan survived the drop with Coventry for four successive seasons before eventually taking them down and took Southampton to the FA Cup final. The quintessential late 90s Prem boss.

Wow, what a start. The results and performances are such that we feel comfortable brushing the ‘too early to judge’ caveat off as nonsense. He’s brilliant and his side are great fun.

Between 1998 and 2002, O’Leary took Leeds to the semi-finals of the Champions League and UEFA Cup. They finished fourth, third, fourth and fifth in the Premier League. His young and exciting side were title contenders before he was sacked by the spendthrift Peter Risdale.

Chelsea achieved success with one player-manager in Gullit, so immediately turned to another. And it proved to be a mastertroke with Vialli winning the League Cup, Cup Winners’ Cup and FA Cup. The Italian can certainly claim some of the groundwork that paved the way for Roman Abramovich’s millions.

Started two Premier League games in a playing career set to be dwarfed by his achievements as a manager.

On this day 8 years ago, Sergio Aguero scored the most iconic goal of Premier League history.