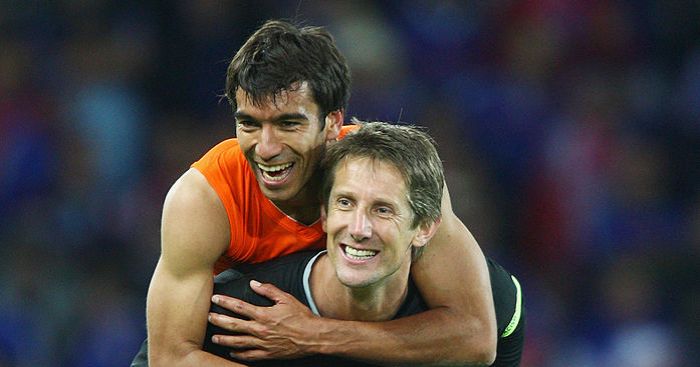 DVDB will become the 20th Premier League player with the ‘van’ prefix as part of his surname. So obviously we have collated and ranked the previous incumbents and used only their initials and clubs to make it fun.

19) JVD (Southampton and Wolves)
“He is a tough character and a good player,” was chairman Rupert Lowe’s assessment of a 6ft 4ins 20-year-old with Champions League experience, signing with Southampton from Ajax for £2.5m. It turned out that it was Jelle, in actual fact, who was not ready, losing three and drawing three of his six Premier League games as Saints finished 20th. He joined Werder Bremen on loan instead of mucking it in the Championship, later returning to England’s top flight with Wolves. Six more matches at least brought one win, a goal and a 17th-placed finish. Better but still not great.

18) MVG (Chelsea and Stoke)
He does indeed remain contracted to Chelsea, signing a one-year deal extension in June despite playing four times for the club in seven years. Stoke gave him a bit more of a chance during one of his 427 loans, yet even then he soon lost his place to Ibrahim Afellay and was sent back to Stamford Bridge upon the similarly ill-fated club-record arrival of Giannelli Imbula.

17) RVW (Norwich)
So confident were Norwich of their ability to establish themselves in the Premier League that Chris Hughton readily dismissed claims from Sporting Lisbon that their £8.5m club-record signing had a relegation clause inserted into his contract. The deal for the Dutch striker was announced as early as March, allowing expectation and excitement to grow into the new season. A debut goal on the opening day of the campaign was something of a false dawn, as 24 games without troubling the scoresheet, as well as that drop to the Championship, followed.

16) AVDM (Everton)
It was a week after being knocked out of the Champions League by a combination of Villarreal and Pierluigi Collina that Everton secured perhaps their most exciting signing of a summer that saw Simon Davies, Per Kroldrup, Phil Neville and Matteo Ferrari shuffle through the door. While David Moyes perhaps hoped his new winger would see out the remainder of his career at Goodison Park, the circumstances surrounding his retirement at 29 and after 24 games in four years were regrettable.

15) PVDH (Tottenham)
The Belgian-born Welshman almost entirely missed the Premier League boat, arriving in England with Birmingham in 1978 before thriving at Everton from 1984 and moving to Tottenham in 1989, where he would win the 1991 FA Cup and play 18 games in the top flight’s inaugural breakaway season. He featured in a 6-0 defeat to Sheffield United, a 6-2 loss at Liverpool and a 3-1 win against Arsenal. How fun.

14) DVB (Manchester City)
The only Van man in Premier League history not to reach double figures for appearances in the competition, his five games on loan for Manchester City in 2004 brought defeats to Liverpool, Chelsea and Leeds, a goalless draw with Birmingham and a single victory: 4-1 against Manchester United. But Kevin Keegan was enamoured with the “terrific” centre-half, ruling out a permanent move as “I feel he will go to a big club”. Hamburg came calling that summer.

13) RVLP (Huddersfield)
His three Premier League goals all came in victories, no mean feat considering Huddersfield won 12 games across two seasons, the second of which the winger left on loan halfway through. He dribbled a lot. Like, an unnecessary amount. And though it never really was his natural level, he fared well enough.

12) MVDH (Swansea)
A free agent upon his release from Swansea this very summer, the 27-year-old defender will surely find a respectable home in due course. He moved to south Wales from Ajax at precisely the wrong time, joining not the progressive, forward-thinking club focused on playing attractive football, but the confused broth spoiled by Francesco Guidolin, Bob Bradley, Paul Clement and Carlos Carvahal. Swansea conceded 52 goals in his 31 starts, which is roughly the equivalent of 2019/20 Watford over the course of a full season.

11) UVG (Southampton)
In just 27 Premier League appearances, he played his part in some of the competition’s most enduring moments. From October 26 to November 23 of the 1996/97 season, the Southampton defender featured in a 6-3 win over Manchester United, a 7-1 defeat at Everton and a 2-0 loss to Leeds, going down in history as one of only 11 top-flight teammates of George Weah’s cousin.

10) PVH (Nottingham Forest)
Two seasons, two finishes of 20th and one Premier League career remembered more for squabbles than success. The striker scored one goal in seven games for Nottingham Forest after joining from Celtic in March 1997, simultaneously fired Dave Bassett out of the second tier while hankering to leave, then did just as miserable a job of keeping Forest in the top flight after reluctantly putting his toys back in the pram and making his first appearance of the 1998/99 campaign in November. Things turned so sour that his strike to secure a 2-2 draw with Derby that month saw teammates celebrate not with the scorer, but with the man who provided the cross in Scot Gemmill.

9) RVDL (Derby)
The current Newcastle (Town) boss guaranteed his place in Derby hearts alongside Steve Bloomer and the 2007/08 season by scoring the goal that confirmed promotion to the Premier League in April 1996. The former club captain featured a little less regularly thereafter but was still a valued member of a squad that finished 12th and ninth before he left for Barnsley in 1998. Both of his top-flight strikes came in wins: against Tottenham in March 1997 and Aston Villa the following month.

8) PVA (Chelsea, Wigan, Sunderland, Crystal Palace)
The glue that has held together many a left wing is still going strong at Selhurst Park and might forever be good for a handful of goals each campaign while maintaining a reputation as a solid attacking full-back. The scorer of the first last-minute away winner at Old Trafford in the Premier League has recently displayed his aptitude for one-on-one defending by completely nullifying dangerous right-winger Katie Hopkins.

7) GVB (Arsenal)
Sol Campbell really was an island of brilliance in a sea of mediocrity when it came to Arsenal’s 2001 summer transfer window. Francis Jeffers, Richard Wright, Junichi Inamoto, Stathis Tavlaridis and the inimitable Juan ranged from expensive mistake to two career appearances in north London, but their £8.5m purchase from Rangers might have been the most disappointing of the lot. He left two years later with a Double on his C.V but Emmanuel Petit’s replacement as Patrick Vieira’s midfield partner soon became deputy left-back to Ashley Cole. Injuries took their toll.

6) RVDG (Manchester United)
Sir Alex Ferguson paid tribute to “a model of professionalism” when his perennial back-up glovesman finally decided 61 games in six years was not quite stimulating enough. The Dutchman might not consider his five games as all that crucial to Manchester United’s Treble season but he played 24 times across the subsequent two campaigns to earn a pair of Premier League winner’s medals. The manager appreciated his talent and patience to such a degree that he afforded him a 13-minute substitute cameo for the final game of the 2001/02 season, his previous league appearance coming in the last match of the previous campaign.

5) RVDV (Tottenham)
Some players never reach double figures so to score ten or more goals in both of your full Premier League seasons is a solid effort. Perhaps the greatest Harry Redknapp deal of all, swooping in on deadline day after the Dutchman’s price plummetted following the collapse of a £16m move to Bayern Munich, Harry Maguire’s best mate really was ever so wonderful for a couple of exciting years at Tottenham.

4) EVDS (Fulham and Manchester United)
One of the greatest goalkeepers ever underwent a seamless transition from European champion to remarkable coup for promoted Fulham, then the Peter Schmeichel replacement Sir Alex Ferguson had craved for more than half a decade. Four titles, a Champions League and the fact he went almost 22 hours without conceding a Premier League goal between November 8, 2008 and March 4 of the following year outline him as a bona fide legend. Only Pepe Reina (45.79%) and Petr Cech (45.6%) have a better top-flight clean-sheet percentage than his 42.17%.

3) RVP (Arsenal and Manchester United)
His decision to finally “listen to the little boy inside of me” ensured that a tremendous return of 144 goals in 280 games was finally rewarded with that title medal he so deserved. Alan Shearer is the only other player to win consecutive Premier League Golden Boots with different clubs, while no-one since the Dutchman has won the league as top scorer. Until June, one of the great modern strikers also laid claim to the most recent hat-trick in Manchester United history.

2) VVD (Southampton and Liverpool)
The fella that stewarded a 0-0 draw with West Brom and a 3-2 defeat to Manchester United as partner to Jose Fonte in his first two Premier League appearances has come a long way. Mind you, he lost his league debut for Liverpool to Swansea and drew with Tottenham in the next game so perhaps he is just a bit of a slow starter. The centre-half has faced 29 different teams in England’s top flight and failed to beat only one: Mike Phelan’s Hull City.

1) RVN (Manchester United)
No player has scored more Champions League goals without ever winning the trophy. Few can match his achievement of winning the Golden Boot in three different European divisions. Only Sergio Aguero (six) and eternal enemy Thierry Henry (five) scored at least 20 goals in more seasons, a feat made more ridiculous by the fact he stayed at Manchester United for just five and was injured for more than half of one of them. Let him be overlooked as a Premier League legend no longer.