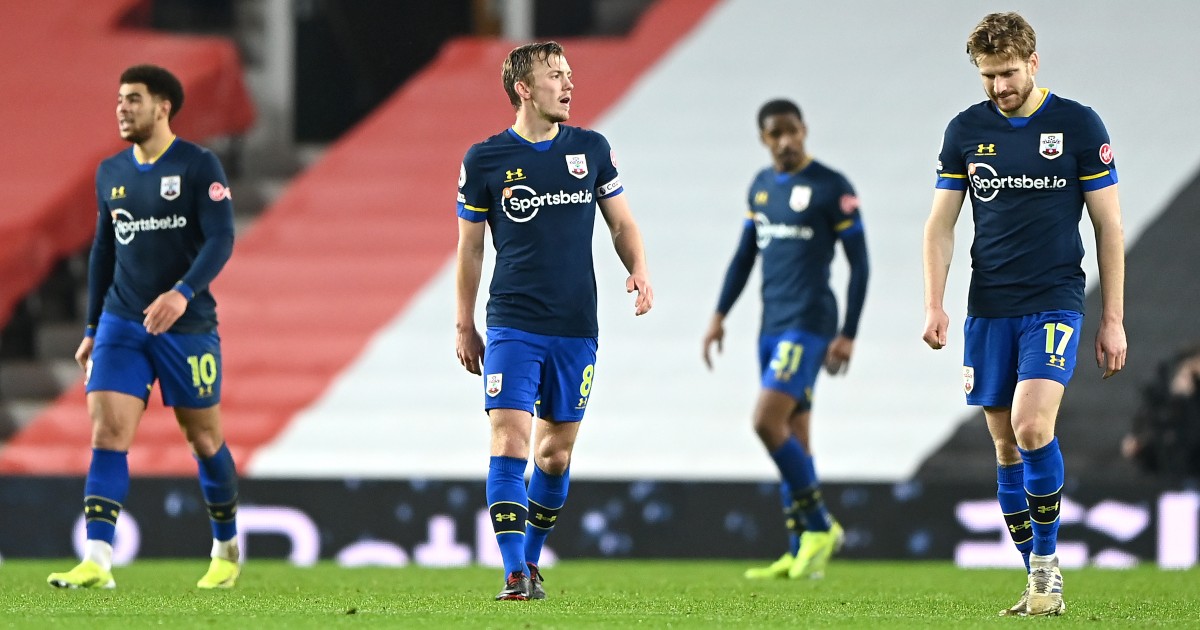 Southampton have to lose 9-0 this season: the gods have willed it. They have 16 games left but which opponent is likeliest to oblige?

Ralph Hasenhuttl’s side lose 9-0. That is their thing. They did it in October 2019 and then again in February 2021, with time running out to find this campaign’s chief double-digit flirters. Southampton have at least 16 games left, including the FA Cup, so let’s rank those remaining opponents by likelihood of sticking nine past them.

15) Leeds (away, April 2)
Every chance Leeds net nine at Elland Road, especially if Big Dan James escapes those glorious clutches of Mohammed Salisu. But 9-0 relies on the preservation of a clean sheet and Marcelo Bielsa’s washing machine is knackered.

14) Watford (home, March 12)
If Claudio Ranieri was still there then the possibility of Emmanuel Dennis scoring a triple hat-trick would persist; as it is, Roy Hodgson’s heaviest Premier League win ever remains a 7-2 victory achieved over Sheffield Wednesday in August 1997, when Tino Livramento was minus five years and three months old.

12) West Ham (home, March 2)
FA Cup fifth-round tie, this one. A Premier League team thwonking fellow top-flight dwellers by nine does not sound all that magical.

11) Leicester (away, May 22)
Sure, Brendan Rodgers and Leicester started it all a couple of years ago. But they are in a bit of a mess currently and Southampton wisely passed The Jannik Vestergaard Curse on to the Foxes in August.

10) Arsenal (home, April 16)
While they displayed a latent ability to rip through more malleable defences over the festive period, one particular issue undermines Arsenal’s hopes: their red card fetish. And as the template to a 9-0 Southampton defeat dictates, Saints must themselves have at least one player sent off early on. Arsenal take an eight-goal lead before the game is abandoned due to a multi-man melee instigated by Granit Xhaka fouling himself.

9) Aston Villa (away, March 5)
Steven Gerrard would not allow such frivolities. Take an early 2-0 lead, instantly substitute Jacob Ramsey and Philippe Coutinho and then deploy a defensive block as low as his hairline. Three points are the most important thing. Let’s prepare for the next game.

7) Norwich (home, February 25)
This is on the specific proviso that Jamie O’Hara does co-commentary throughout as Josh Sargent runs wild.

6) Chelsea (home, April 9)
Thomas Tuchel once guided Paris Saint-Germain to a 9-0 win over Guingamp, who brought on Papy Djilobodji after 73 minutes as damage limitation. Chelsea will be desperate to avenge a club legend.

4) Everton (home, February 19)
It is not too difficult to imagine Everton’s lovely attacking arsenal suddenly clicking – even if it should be noted that Asmir Begovic is only one Premier League goal behind the career tally of Donny van de Beek – and a Frank Lampard wheeling out his usual post-match routine. Something like this should suffice:

A whole year of building, all that hard work in the press room, all comes down to this: this is perfection. Liquid Lampard. The Carlos Alberto vs Italy 1970 of Lampardian Transitions. pic.twitter.com/4VwIZxzLL2

3) Newcastle (home, TBA)
The wildcard. It was meant to be played at the start of January. There remains no official decision on when it will actually take place. Ralph Hasenhuttl then suggested that winter signings should not be allowed to feature in matches that were postponed before they joined their new clubs. Kieran Trippier, Matt Targett and Dan Burn masterclass incoming.

2) Liverpool (home, May 15)
If it’s going to happen – and fate says it absolutely must – then Liverpool might as well be the perpetrators. Saints have lost their last eight meetings with the Reds, that 1-0 victory at St Mary’s last year the only exception to a rule of being largely pummelled. That run has included two 4-0 defeats, a pair of 3-0 losses and a smattering of two-goal deficits. Divock Origi also scored a hat-trick against them once. It’s nailed on.