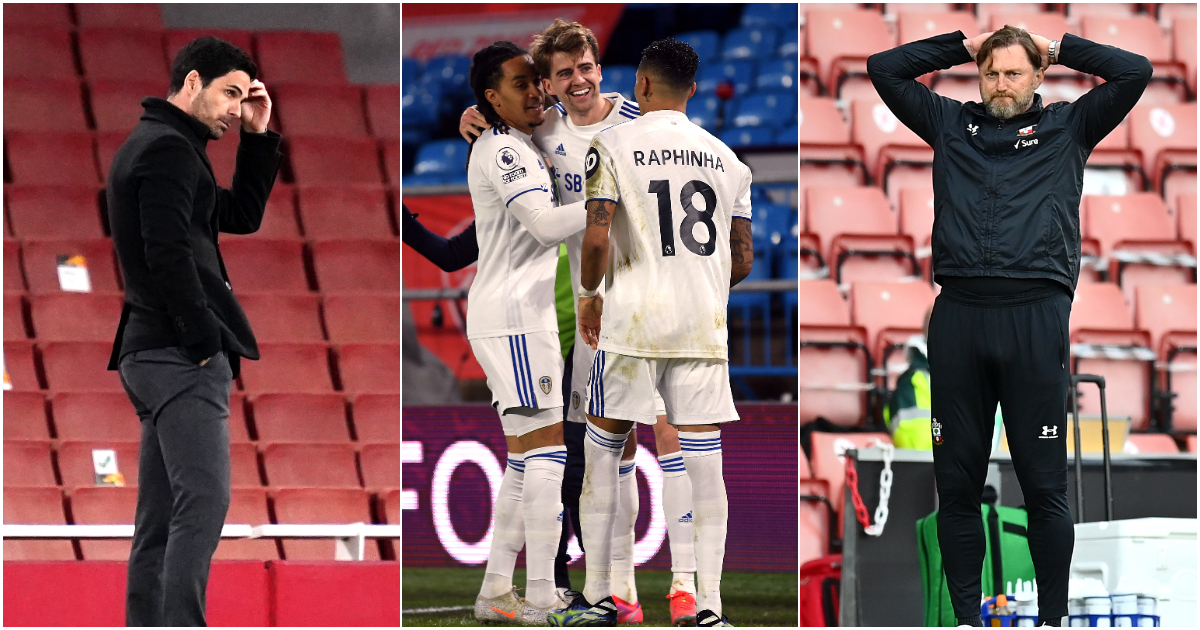 We’ve all caught Euro fever right now, but never mind all that because yet another Premier League season is just around the corner as the relentless passage of time trundles on and relentlessly on until we are all nought but dust.

But what’s the mood like around the 20 Premier League clubs ahead of kick-off that can now officially be called ‘next month’ and oh my god our time on this planet is so fleeting?

Well wonder no more, because we’ve scientifically ranked all the clubs from ‘relentlessly nauseatingly upbeat’ to ‘Spurs’ so you don’t have to.

1) Leeds
Absolutely everyone at the club just seems to be remarkably chipper, don’t they? New signings seem genuinely excited. Kalvin Phillips is bossing the Euros. Everyone’s second favourite team. The entertainers. Kick on and challenge for Europe next year. Those of us who happen to reside in Yorkshire but are not Leeds fans are now desperately missing the last 15 years when Leeds fans were miserable and kept their heads down.

Some big money going to be thrown at Leeds United this summer for Kalvin Phillips. Truly World-class

And the beauty of it is that Leeds United are going to reject all offers.

2) Chelsea
Won the Champions League, which will help get you through a summer, I imagine. Will start the season fully expecting to challenge for the title this year. Whether they end the summer feeling that way is currently moot. It’s happy times down at Stamford Bridge.

3) West Ham
Going on a European tour after their best season in forever. West Ham being West Ham means it is all inevitably doomed to fade and die, but for now it is party time.

4) Aston Villa
Beat Arsenal to a signing, which is a big deal apparently. Jack Grealish is apparently going to sign a new contract which definitely is a big deal. Either that or he’s going to sign for Manchester City which would inevitably send Villa down a few spots but would bring in a vast pot of cash to reinvest. And Ashley Young is back, so that’s a nice thing to happen, isn’t it?

5) Brentford
If you’re not in good spirits ahead of your first ever Premier League season and first in the top flight since the 40s then you’re doing something wrong. Maybe follow golf or rugby instead or something.

6) Norwich
Promoted in excellent style and currently have reason to think this time they might be better prepared to avoid following that with abject relegation, as is their wont. September may bring cruel reality back to bear, but for now the Canaries are singing and full of hope.

7) Watford
Promotion is good for the soul.

8) Leicester
Hard to place. The fans are still rightly and thoroughly giddy after adding an FA Cup to that improbable league triumph in Leicester’s frankly ludicrously glorious recent history. They have a fine team and excellent manager and best of all it all seems properly sustainable. But there is also the pang of once again not having the Champions League football to look forward to that they really probably should have had. We’ve still probably put them too low, haven’t we?

We can confirm that exciting young striker @PatsonDaka20 will join the Club on a five-year-deal from 1 July, subject to Premier League and international clearance 🦊#WelcomePatson

9) Manchester City
Only won two trophies in the end which is a bit of a downer. And one of those was the Carabao – their own private property these days – and the other one was the Premier League which was obvious months out. Ended the season in vaguely limp fashion thanks to a pair of significant 1-0 defeats to Chelsea that not only halved the Quadruple attempt but have the nagging power to be harbingers of things to come. It’s not all doom and gloom at the Etihad by any stretch, but it’s not February either.

10) Brighton
Graham Potter is staying despite numerous ostensibly bigger jobs becoming available and if someone can turn xG into actual G as surely they must then everything is going to be glorious. If West Ham can finish top six, then anyone can.

11) Crystal Palace
After years of the steady if often dull hand of Roy Hodgson at the tiller, Palace have gone completely mad and will apparently make Patrick Vieira their next manager. That is going to be a simply tremendous amount of fun, with the only doubt – and the thing leaving Palace in mid-table in this list at least – being about who will have all the fun. It might not be Palace.

12) Liverpool
Last season was weird and they were very, very rubbish indeed in that middle bit between the two runs of title-winning form. All about those injury comebacks to determine how the mood shifts between now and August. As with all Big Six clubs to varying degrees, Super League bad taste lingers.

13) Manchester United
Are they overachieving or underachieving? Is Paul Pogba worth the fuss? Is Ole Gunnar Solskjaer good or not? Is the team good or not? What is the point of anything, really, when you think about it? Hmm? Yeah.

15) Newcastle
Quite good and fun at times last season, weren’t they? Admittedly that’s in relation to what had gone before, which was beyond grim. Dodged relegation with plenty to spare in the end, onwards and upwards now. But Steve Bruce is still there. And Mike Ashley is still there. The dark clouds may have lifted slightly, but it would be wrong to suggest they’ve dispersed.

16) Southampton
Fourteen points from their last 21 Premier League games, and six of those against teams who are no longer with us.

17) Wolves
Took a gamble to try and improve on back-to-back seventh-placed finishes. Finished 13th. Sight of former manager failing upwards to Spurs may prompt grim chuckles but while the quest was noble, the execution was shonky and those successive sevenths already have the look of an impossible-to-match high watermark.

18) Everton
They are simply not allowed to have nice things. Carlo Ancelotti has gone and with that comes yet another restart and reboot, but at least they will always have the memories of that first month of last season when James and Dominic Calvert-Lewin were the best two players in the Premier League and all was right with the world. Nobody can ever take that away from the Toffees. And they’re once again getting a better new manager than Spurs, so that’s good, but he’s a Liverpool legend, which is not. Above all, though, having their most exciting and promising season in a decade and still finishing 10th and then having an elite manager bugger off to Madrid is a tough pill. Still freaks my nut out that the last four permanent Everton managers are Sam Allardyce, Marco ‘Where Are They Now?’ Silva, and the current managers of Barcelona and Real Madrid.

19) Arsenal
It’s grim up north London. A fanbase now reduced to laughing at assorted Tottenham misfortune (of which there is, as ever, plenty) to divert attention from their own desperate shamblings. And the real kicker? Spurs are an absolute mess but are still better than Arsenal. Laughing at Spurs being in the Europa Conference is good and correct but doesn’t fully detract from the fact Arsenal aren’t even in Europe at all. Arsenal can laugh at Spurs all they want, and Spurs fans are literally the only fans more miserable than them right now, but the facts are these: almost never in the Premier League era have Arsenal been more Spurs than they are right now.

20) Tottenham
I’m old enough to remember when Spurs had a manager. And now, at last, they have another one. Is it their beloved former manager? No. Is it the volatile but brilliant Italian who just turned Inter Milan from perennial jokers to hard-nosed title winners? Also no. Is it a bright and progressive young manager whose tactical nous looks an ideal match for Spurs’ talented but wonky squad? Also no. It’s the fella who just took Wolves to 13th. It’s not Gennaro Gattuso at least, but that’s cold comfort. Also, their best player is desperate to leave and next season they have to play in the Europa Conference League every Thursday as a constant reminder of their fall.