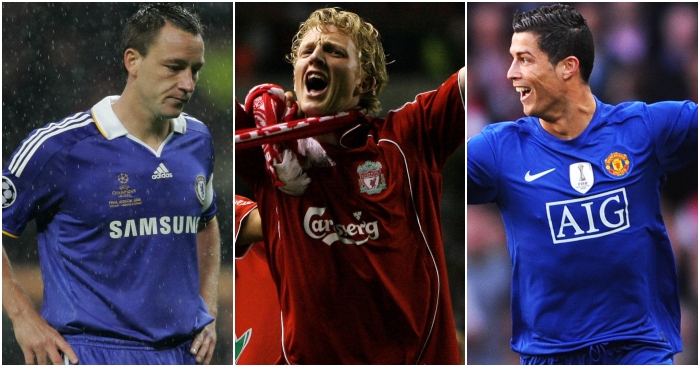 12) Liverpool 0-0 Chelsea – group stage, 2005-06
After winning the Champions League in 2005 while failing to re-qualify by finishing in the Premier League top four, Liverpool were invited to defend their trophy as England’s fifth representative. A lack of county protection in the draw saw them paired with Chelsea in the group stages but it mattered little. In the absence of a goal or any excitement in either game, the only event of note was Michael Essien’s attempt to snap Dietmar Hamann’s leg in half, though you’ll have to take our word for it because it seems no video evidence exits.

11) Chelsea 1-1 agg Liverpool (pens 1-4) – semi-final, 2006-07
Two ties tighter than a couple of coats of paint were each won by Joe Cole and Daniel Agger on their own turf, teeing up a penalty shootout at Anfield. AC Milan or Manchester United lay in wait for the victor, but Chelsea bottled the opportunity to reach their first European Cup final. Arjen Robben and Geremi – who had been dispatched from the bench with the sole purpose of scoring his spot-kick – both missed their attempts with Petr Cech unable to keep out any of Liverpool’s four strikes.

10) Chelsea 1-3 agg Manchester United – quarter-final,  2010-11
On their way to Wembley where Wayne Rooney felt obliged to beg Sergio Busquets for mercy, United brushed aside the Blues, with much of the donkey work done in the first leg at Stamford Bridge. Another tight stalemate between two sides so familiar with each other was broken by Wayne Rooney’s first-half strike which gave United a cushion at Old Trafford. There, where Didier Drogba was axed in favour of the still-goalless Fernando Torres, Javier Hernandez extended United’s advantage, and though Drogba gave Chelsea hope after coming on at half-time, it was extinguished almost immediately by Ji-sung Park, with Ramires having been dismissed.

9) Chelsea 0-1 agg Liverpool – semi-final, 2004-05
Jose Mourinho’s Chelsea were paired against Rafael Benitez’s Liverpool in the semi-finals to guarantee an English team would be in Istanbul for the final for the first time in six years. After a goalless first leg at Stamford Bridge, it all came down to the return match at Anfield – one that still rankles with Chelsea fans. Luis Garcia’s fourth-minute goal decided the contest, but it was shrouded in controversy as replays failed to clarify whether the ball had crossed the line. The goal stood and Liverpool went on to beat AC Milan in thrilling fashion.

Was it over the line? pic.twitter.com/7FRMETVKlt

8) Liverpool 5-1 agg Manchester City – quarter-final, 2017-18
Manchester City were on their way to a record-breaking Premier League title and were favourites to progress in this quarter-final tie, but Liverpool had other ideas and blew them away in the first leg at Anfield. After City’s coach was attacked on the way into the ground, goals from Mohamed Salah, Alex Oxlade-Chamberlain and Sadio Mane put the Reds 3-0 up after only 31 minutes to put one foot in the semi-finals. City were unable to rescue the game in their own backyard, despite an early goal from Gabriel Jesus, as efforts from Salah and Roberto Firmino gave Jurgen Klopp’s side a win on the night and a 5-1 aggregate success.

7) Arsenal 3-5 agg Liverpool – quarter-final, 2007-08
As tends to be the case, the first leg was a tense affair with no quarter given. Emmanuel Adebayor and Dirk Kuyt traded goals within three first-half minutes at the Emirates, leaving Liverpool with the advantage going back to Anfield. There, where the two sides met for the third time in six days, Abou Diaby gave Arsenal an early lead but Sami Hyypia nodded in a leveller. Fernando Torres’ goal midway through the second half was cancelled out by Adebayor after a thrilling run from Theo Walcott with six minutes to go, but Arsenal still had time to blow it, with Steven Gerrard’s penalty and Ryan Babel’s last-minute strike setting up a semi-final against more familiar opposition.

6) Chelsea 3-2 agg Arsenal – quarter-final, 2003-04
Roman Abramovich’s money was beginning to bear fruit for Chelsea and they faced Arsenal in an all-London quarter-final. The Gunners, on their way to winning the Premier League without losing a single game, entered the second leg in the ascendancy after getting out of Stamford Bridge with a 1-1 draw. Jose Antonio Reyes then gave them a half-time lead in the second leg at Highbury but a brilliant Chelsea fightback began with a Frank Lampard goal just after the restart and ended in thrilling fashion with Wayne Bridge’s 87th-minute winner.

On this day: 2004 – #Chelsea beat Arsenal to reach the Champions League semi final with Wayne Bridge getting the winner. #CFC pic.twitter.com/jRS4j4twDf

5) Manchester United 4-1 agg Arsenal – semi-final, 2008-09
John O’Shea and Manuel Almunia were the unlikely heroes in the first leg at Old Trafford, where United would have been out of sight had it not been for the Arsenal keeper’s excellence. Almunia, though, reverted to type in the second leg, letting Cristiano Ronaldo’s 40-yard free-kick by him on 11 minutes, by which time Park had already opened the scoring. Ronaldo’s second goal, a first-time finish to complete the speediest of counter-attacks, on the hour remains one of United fans’ favourites of the last few decades. Arsenal were beaten long before Robin van Persie scored a consolation penalty, the award of which saw Darren Fletcher dismissed, forcing the midfielder to miss the clinic Barcelona laid on for United in the Rome final.

It really was a bit mad.

3) Liverpool 5-7 agg Chelsea – quarter-final, 2008-09
Guus Hiddink’s side won the away leg of the quarter-final 3-1 but Liverpool gave them an almighty scare at Stamford Bridge, surging into a two-goal lead at half-time. Didier Drogba, Alex and Lampard bagged in the second half to put Chelsea back in control before a frantic final 10 minutes. Lucas Leiva and Dirk Kuyt struck in the space of two minutes to leave Liverpool needing just one more goal to seal a sensational win, only for Lampard to make the game safe in the 89th minute.

2) Liverpool 2-3 agg Chelsea – semi-final, 2007-08
John Arne Riise scored a stunning diving header in added time in front of the Kop – which, unfortunately for those occupying it, was the end Liverpool were defending as the first leg drew to a close. It cancelled out Dirk Kuyt’s opener and gave Chelsea a shot in the arm before a thrilling return encounter at Stamford Bridge. The Blues took their revenge for three exits in the previous four years at the hands of Rafa’s Reds, with Drogba’s brace sandwiching Lampard’s penalty in extra-time, which came six days after the death of his mother.

1) Manchester United 1-1 Chelsea (pens 5-4) – final, 2007-08
Sir Alex Ferguson lifted a second Champions League crown, nine years after his first, as Manchester United turned Moscow red in the final against Chelsea. Ronaldo headed United in front, only for Lampard to draw Avram Grant’s Chelsea level before the break. There were no other goals but Drogba got himself sent off before the game was decided on penalties. The shootout will be remembered for John Terry’s slip, when a goal would have won it for Chelsea, but it was Edwin Van Der Sar’s save from Nicolas Anelka that proved decisive.