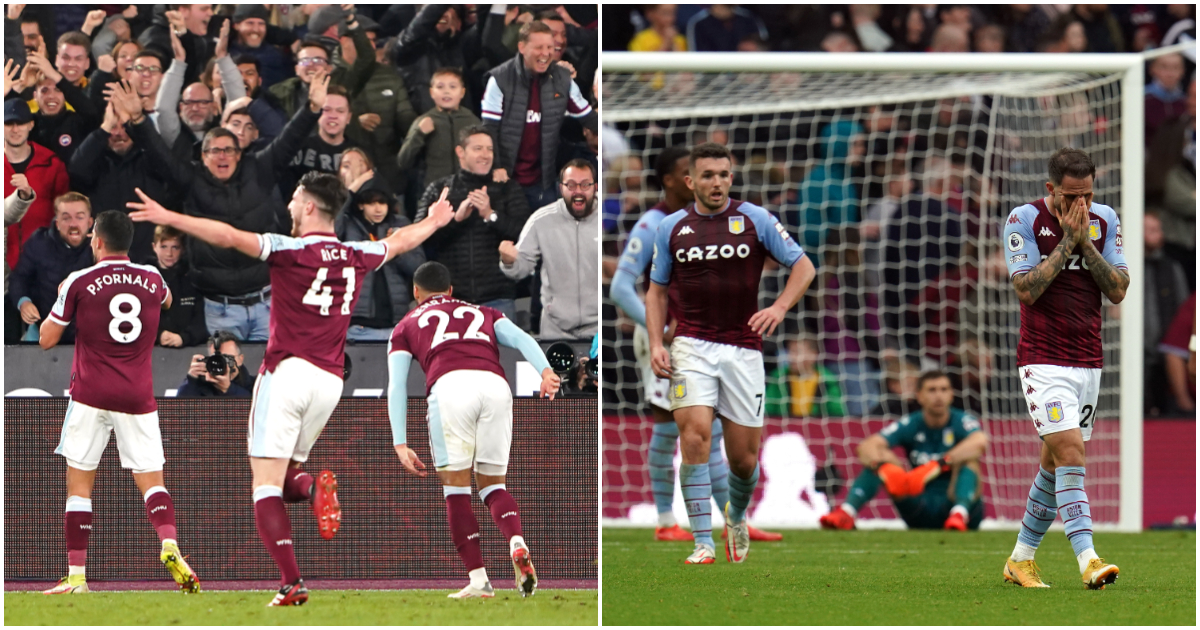 We last did this in September, which isn’t very long ago at all really. But there have been some dramatic movers in our studiously scientific rankings…

September’s rankings are in brackets, and you can read the whole thing here.

1. West Ham (3)
They’ve got the London Stadium rocking and the team is flying. If Arsenal or United or even Spurs were where West Ham are right now and playing the way West Ham are right now, everyone would be calling them genuine title challengers. As well as the excellent domestic form, West Ham are also cruising through their Europa League group stage as a rare example of an English team that actually hits the sweet spot of a) being happy enough to be in the Europa and b) having the resources to give it a proper crack. This is West Ham, so the inevitable expectation remains that it will all fade and die, but the certainty of that has long since gone. Right now, all things feel tantalisingly, dizzyingly possible.

2. Chelsea (4)
Drawing with Burnley is entirely silly but shouldn’t detract too much from a season going swimmingly. As an aside, what has happened to Chelsea in the year since they decided to appoint a manager based on their ability as a manager rather than the fact they were a great player who ‘knows the club’ makes the continued refusal to acknowledge objective reality at Manchester United all the more remarkable.

3. Brighton (1)
Currently on a curious run featuring a lot of draws that alternate between encouraging signs of further progress (Arsenal, Liverpool) and infuriating missed opportunities (Norwich, Newcastle). Overall, though, while some frustration is understandable the mood rightly remains overwhelmingly positive. Level on points with Manchester United, ahead of Spurs and Leicester. It’s pretty, pretty, pretty good.

4. Liverpool (5)
On the one hand, they have at times this season looked back to their imperious and flowing 2018-2020 peak. On the other, they are only two points ahead of Arsenal. On the one hand, they have the undisputed best player on the planet. On the other, he’s still somehow under-rated. Can’t shake the notion that Liverpool fans just seem not quite as happy about everything as they probably should be.

5. Crystal Palace (7)
More than enough evidence for fans to buy in to the whole Patrick Vieira experiment. Defeats, albeit hefty, at Stamford Bridge and Anfield can be cheerfully ignored – especially when the flipside includes demolishing Tottenham and beating Manchester City away from home. Even the draws, of which there have been several, have been fun and entertaining. Coming from behind twice to draw at West Ham and from 2-0 down against Leicester spring to mind. The results are decent and the whole thing is just more fun than the worthy, successful on its own terms but often eye-bleedingly dull and functional Roy Hodgson era. Palace also have a decent run of upcoming fixtures – Burnley, Villa, Leeds, Everton, Southampton, Watford and Norwich all feature before 2021 is out – so there’s a very real prospect of things looking cheerier still when we next revisit this.

6. Newcastle (19)
Perhaps the trickiest of all teams to place. On the one hand, wild euphoria at finding themselves the richest club in the world with all the tantalising possibilities that brings. On the other, the nagging inconvenience of having been taken over by the worst people on earth and – perhaps worse even than that for some fans – the dawning realisation that ‘doing a City’ is neither inevitable nor straightforward. There are already worrying signs that the new regime don’t particularly know what they are doing, and errors like the ‘appropriate culturally-inspired clothing’ U-turn point to confusion about how to steer a course through their new situation.

7. Arsenal (16)
Trust the process. Six wins and two draws from their last eight league games plus a couple of routine Carabao wins have transformed the mood at Arsenal. Still hard to shake the feeling that it’s all built on sand and Arteta might still very well turn out to be entirely fraudulent but for now Arsenal are top-four contenders and have somehow sh*thoused their way to within two points of Liverpool and you have to respect that. More importantly for our purposes, as fans you have to enjoy it.

8. Brentford (2)
The giddy early-season spell has collided with reality somewhat, but everyone at Brentford should still be happy enough with everything really. Apart from losing to Norwich. You can’t be happy about that. Ten of Brentford’s 12 points have come against teams in the top eight. Don’t know what to read into that. Maybe nothing. Maybe nothing means anything. Maybe it’s all meaningless.

9. Tottenham (20)
Tricky to place but…definitely no longer bottom. Improvement is still largely hypothetical and you did have to squint quite hard at a mediocre performance against a struggling Everton to see the theoretically decent Antonio Conte side that could emerge from the current fog, but you can just about see it. Either way, Spurs have somehow stumbled into a situation where after a summer-long catastrof**k of a manager search they’ve ended up with one of the very best managers in the world by November. It’s an extraordinary situation. Can’t help but feel that when we come back to this in a couple of months they’re either going to be at number one or back at 20 again. Either is fine with us.

10. Wolves (14)
The underlying numbers beneath a run of early-season defeats suggested things would pick up and sure enough they have done precisely that. Despite a, frankly, sh*t performance at Palace, Wolves are now just one place below their accepted seventh-place ceiling. Hooray!

11. Southampton (15)
It looked like going full despair as last season’s ropey end to the season was followed by high-profile summer departures and a seven-match winless run to start the new campaign. Now, though? ‘Salright. Ten points from the last four games has raised spirits on the south coast no end. Also Ralph Hasenhuttl’s natty waistcoats. But mainly the 10 points.

12. Manchester City (10)
There are two Manchester Cities. The one that scores five or six goals, making a mockery of such archaic concepts as ‘strikers’ as a succession of preternaturally gifted players make the game look both staggeringly beautiful and alarmingly simple. Then there’s the Manchester City that huffs and puffs for whole games and fails to score against teams, with all due respect, fathoms below their level such as Southampton, Crystal Palace and Spurs. The result? Second place in the real table, but middle of the pack in this one.

13. Watford (9)
‘It’s almost October and there hasn’t been so much as a whiff of manager sacking talk at Vicarage Road,’ we guffawed back on September 28. Xisco Munoz was sacked on October 3. The 5-2 win at Everton was a lot of fun but also, it must be said, something of an outlier for a team that has already managed four 1-0 defeats in 11 league games this season.

14. Leeds (12)
Have forgotten how to defend, if they ever really knew how (they didn’t). Have also forgotten how to attack, which they definitely did used to be able to do. Still feels pretty certain that there are significantly more than three teams notably worse than them, so relegation doesn’t feel like a real threat. But that this even needs saying after last season when everyone went a bit crazy and significantly altered the targets for this year shows the change in mood. It’s all about perspective: had Leeds been like this last season, everyone would have been happy enough. But they’ve been shown something more now and despite that huge wait for Premier League football to return, this year’s relatively thin gruel already feels a bit meh.

15. Leicester (13)
A very wobbly season all round, an alarmingly porous defence, and reports linking Brendan Rodgers with Manchester United at the precise moment that his stock starts to fall a touch. However much they punched above their weight, the missed opportunities of those two consecutive fifth-place finishes must really nag away now. Overall, though, Leicester’s last five or six years have been so patently absurd that their fans have managed not to become complete entitled bellends about this year’s stumbles. There is disappointment, but not despair.

16. Manchester United (8)
It’s getting absolutely ridiculous now. Come on. Have lost four of their last six Premier League games, and yet the most disastrous game of all might genuinely be their only win in that run, a 3-0 spangling of Spurs that convinced their opponents to take action, sack their underperforming manager and promptly hire the absolutely ideal candidate to turn Manchester United into the team they ought to be.

17. Everton (11)
Hiring a manager who is a bona fide legend at your conspicuously more successful local rivals is always a gamble. Right now it’s not paying off and the fans are getting a bit grumpy. While the opprobrium at the weekend was mainly (if unfairly) aimed at the officials, that’s often how more widespread frustration manifests. It’s not a happy fanbase right now after three straight defeats were followed by a limp failure to beat a team that famously doesn’t even shoot. With Manchester City, Liverpool, Arsenal and Chelsea all to come before Christmas, things are likely to get worse before they get better. Or, this being Everton, likely to get worse before they get even worse.

18. Burnley (17)
Will climb quickly if they could just play Chelsea every week.

19. Norwich (18)
They’ve won a game! Then sacked their manager! Everything is yo-yo at Norwich.

20. Aston Villa (6)
Sixth! F***ing hell. And it really isn’t that long ago that we did this either. Back then, Villa had by common consent wisely reinvested the Jack Grealish windfall, been impressively open and grown up about the whole process, and beaten Manchester United at Old Trafford. Since then, they’ve lost five games in a row and sacked a popular and likeable manager who had overseen three years of constant improvement including a return to the Premier League before it all went horribly amiss. Smith’s sacking is a curious one insomuch as five bad games wiping out three years of credit feels both outrageously harsh yet entirely necessary.