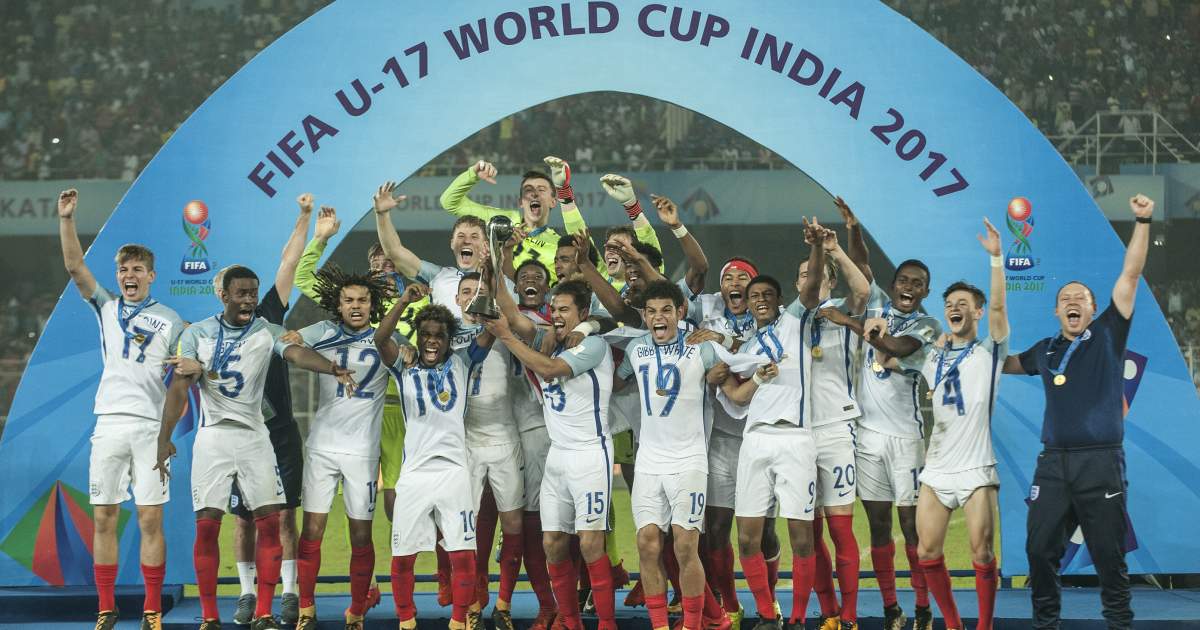 Conor Gallagher’s England call-up makes him the fifth member of England’s 2017 Under-17 World Cup-winning squad to graduate to the full squad, following in the footsteps of Phil Foden, Jadon Sancho, Callum Hudson-Odoi and, most recently, Emile Smith Rowe – who didn’t even make it off the bench in the final, which just goes to show how unpredictable career trajectories can be even from relatively late teen to full squad.

So, with that in mind, you’re probably wondering what the chances are of the 16 remaining members of that squad following Gallagher and co. and making it all the way to Gareth Southgate’s gang? If so, you’re in luck. Because we’ve ranked them right here.

16) Curtis Anderson
The then-Manchester City keeper both saved and scored a penalty in the last-16 shootout victory over Japan. Currently on loan at Eastbourne Borough from Wycombe and England suddenly have quite a lot of goalkeepers anyway. With all due respect to Eastbourne Borough, it’s not quite the level we need.

15) Billy Crellin
Third-choice keeper for England in 2017 and still warming Fleetwood’s bench in League One.

12) TJ Eyoma
Cultured defender who made one appearance for Spurs in an FA Cup win and now a key player for Lincoln in League One having turned a loan move permanent. Could climb through the divisions, but it’s a long old road.

11) Steven Sessegnon
Steven ‘Brother of Ryan’ Sessegnon has represented England at every age level from U16 to U21 but currently is playing just as much first-team football as his better-known sibling, i.e. none. Yet to feature for Fulham since returning from a so-so loan at Bristol City. We all know Gareth loves a full-back but even so.

10) Lewis Gibson
The Everton centre-back, an unused sub in the 2017 final, is currently enduring an injury-plagued loan in League One with Sheffield Wednesday, who are thinking about cutting his temporary spell at the club short.

9) George McEachran
An absolutely crucial presence in the middle of the park for that England side but, after a couple of anonymous loan spells in the Dutch second division, is back plugging away in Chelsea’s U23s. An international call-up doesn’t feel that close, but the talent is there.

8. Tashan Oakley-Boothe
Has the quintessential Promising Young Player At Big Six Club Career having made precisely one first-team appearance for Tottenham. As a substitute. In added time. In the League Cup. Third round. Has since swapped Spurs for Stoke and a reasonable amount of first-team football, but is probably not high on any England watchlists.

7) Joel Latibeaudiere
England’s captain on that night in Kolkata is now at Swansea where he’s been in and out of the side this season. It doesn’t scream international call-up, but in the space of just nine appearances he has managed to feature at centre-back, right-back and on both sides of the midfield. Versatility is crucial in any international squad.

6) Danny Loader
Formerly of Reading and now of Porto, Loader has the same number of top-flight goals this season as Harry Kane having come off the bench for a six-minute cameo against Boavista and scoring in stoppage time to round out a 4-1 win. The minutes per goal ratio is eye-catching, but it will probably take a bit more to leave Kane feeling really nervous.

5) Angel Gomes
Having made his Manchester United debut under Jose Mourinho before the U17 World Cup success, Gomes was certainly on plenty of one-to-watch lists but instead saw contemporaries such as Mason Greenwood and Scott McTominay flourish at United as he waited in the wings. Made an enterprising decision to leave United in 2020 and is now at Lille playing a reasonable amount of Ligue 1 and Champions League football. An international future certainly can’t be ruled out.

4) Rhian Brewster
The highest-profile member of the squad at the time of England’s win, a status only reinforced by successive hat-tricks against USA and Brazil in the quarter-final and semi-final. Also scored in the final against Spain to make a Golden Boot-winning eight goals in all at the tournament. Now something of a cautionary tale having swapped Anfield for Bramall Lane and then failing to score a single goal in 27 Premier League appearances. Does finally have one in the Championship now, and also one for England U21s. Remains just about on The Pathway, then.

3) Morgan Gibbs-White
The midfielder does have 46 Premier League appearances to his name at Wolves, but is currently back out on loan in the second tier with Sheffield United. Four goals in 11 Championship games is decent enough, mind.

2) Josef Bursik
England’s reserve keeper in 2017, Bursik has played 12 out of 17 games for Stoke in the Championship. It’s the one position where being in the second tier need not be a particularly troublesome barrier to England recognition, and despite the currently healthy state of competition for the goalkeeper spots, it’s not entirely far-fetched if Gareth has one of his moments and decides to pick five keepers in some friendlies squad or other.

1) Marc Guehi
Genuinely close. Like, one or two injuries close. Like, already in our Best Uncapped XI close. After an impressive loan spell at Swansea last year, the centre-back has swapped Chelsea for Crystal Palace on a permanent basis and the early signs have been excellent. At a club that is fun again under Patrick Vieira, Guehi is flying having played every minute of every game in the Premier League campaign thus far. “I believe he has the attributes to be one day an international player,” says Vieira, and who are we to argue?