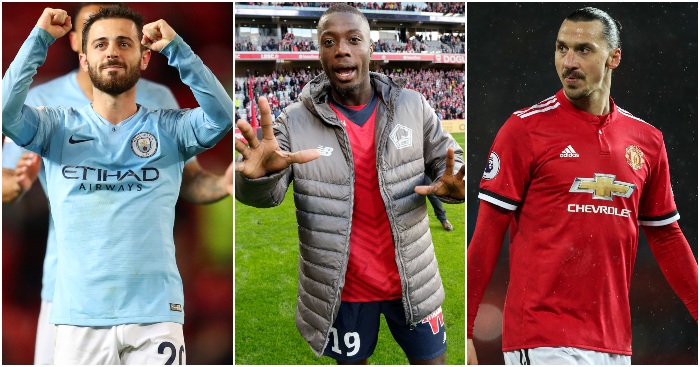 Nicolas Pepe looks set to become the latest player to move from Ligue 1 to the top end of the Premier League. Here, we rank the last 10 stars to cross the Channel for the Big Six…

10) Tiemoue Bakayoko – Chelsea
The Paris-born midfielder, who joined Chelsea from Monaco for £40million – their second most expensive signing at the time – had somewhat rebuilt his reputation during a season-long loan at AC Milan after a ropey start at the San Siro, but Bakayoko has reportedly failed to impress Frank Lampard any more than he managed with Antonio Conte.

The mere mention of his name transports Chelsea fans straight back to Vicarage Road where the 24-year-old was sent off for two bookings before the half-hour in a 4-1 defeat in February last year. Milan may take him off their hands permanently but Chelsea will have to take a big hit on the once-capped France midfielder.

Bakayoko vs Watford will forever give me nightmares, curses I never even knew I had in me were let out.

9) Michy Batshuayi – Chelsea
It seems Chelsea still don’t know what to do with Batshuayi. Presumably he would be away if they could sign replacements but circumstances could give the 25-year-old an opportunity to nail down a place in Lampard’s squad following three loan moves in the last 18 months during which he has scored 18 goals for Borussia Dortmund, Valencia and Crystal Palace.

Whatever they decide, it certainly wasn’t the plan when Chelsea paid Marseille £33million for the Belgium centre-forward three years ago.

8) Benjamin Mendy – Man City
Injuries have restricted the £52million signing to 17 Premier League appearances in two seasons but knee problems haven’t stopped the former Monaco man from playing the clown. Pep Guardiola would rather have a left-back than a globetrotting cheerleader, which presumably forced City to buy back Angelino. Who was ‘absolutely awful’ last week…

Here's the whole Mendy answer, which is ultimately of no use but is quite funny. pic.twitter.com/apnEtfbXGU

7) Serge Aurier – Spurs
The Ivory Coast defender showed signs of improvement last season – among some trouser-dirtying moments for Spurs fans too – but he managed only six starts in the Premier League as fitness concerns linger.

With Mauricio Pochettino having sold Kieran Trippier to Atletico Madrid, Aurier needs to get his act together in this, his third season in English football. Unless the Spurs boss has indeed decided to play Juan Foyth as his starting right-back.

6) David Luiz – Chelsea
The Brazilian’s £34million move from PSG in 2016 was his second stab at a Chelsea career after he was sold to the French champions for £50million two years previously and though he has largely made a better fist of it than the first attempt, most Blues would probably just have shrugged at the sight of the 32-year-old walking away upon the expiry of his contract last season.

As it is, because Chelsea can’t sign anyone else, they have given Luiz two more years to get them through a transfer ban and to give the likes of Kurt Zouma, Andreas Christensen and Ethan Ampadu time to blossom into centre-backs worthy of phasing him out.

5) Fabinho – Liverpool
Liverpool’s £40million capture of the Brazilian was kept weirdly quiet until it was announced shortly after their 2018 Champions League final defeat and the start of his Anfield career was equally bizarre. Jurgen Klopp appeared petrified of using the former Monaco midfielder amid the hustle and bustle of the Premier League and the Liverpool boss was reportedly considering sending Fabinho away at the first opportunity in January.

But the patient approach paid off. Fabinho was eased in and grew over the course of the season which he ended as first choice in Klopp’s midfield. The 25-year-old also proved his versatility by slotting in a right-back and centre-back.

4) Lucas Moura – Spurs
It didn’t seem to matter what Moura did last season – if everyone was fit, the Brazilian was usually out. Even after scoring the incredible hat-trick which took Spurs to the Champions League final, he was benched for the Madrid meeting with Liverpool.

It speaks well of his form since arriving from PSG in January 2018 that many felt Moura was Spurs’ best chance of troubling Virgil van Dijk. But Pochettino opted for a half-fit Kane and Van Dijk pocketed the Spurs centre-forward and a winner’s medal leaving the Brazilian understandably miffed.

3️⃣ was the magic number for Lucas Moura in Amsterdam.

3) Alexandre Lacazette – Arsenal
The £46million signing carried the goalscoring burden for Arsenal before his mate Pierre-Emerick Aubameyang showed up six months later to share the load. Together they have forged one of the Premier League’s best strike partnerships and emerged as just about the only good thing about Arsenal last season.

Aubameyang took a share of the Premier League Golden Boot with 22 goals but Lacazette weighed in 13 while laying on another 10. Unai Emery will be expecting 20 plus in all competitions this season, especially if Nicolas Pepe is providing the ammunition.

2) Zlatan Ibrahimovic – Man Utd
We shouldn’t forget how good Zlatan was in his first season at United, which turned out to be his only full campaign in the Premier League and even that was ended prematurely by a knee injury. He notched 28 goals in all competitions and was nominated for the PFA Player of the Season for helping United to win the League Cup – he scored twice in the final – and Europa League.

Ibrahimovic didn’t hit the same heights upon re-signing for United after his knee injury but allowing him to join LA Galaxy might still be seen as a mistake given the influence he had upon the dressing room at Old Trafford. When Zlatan went, the mentality shifted, leaving Jose Mourinho to fight a losing battle.

1) Bernardo Silva – Man City
“For me, to drop Bernardo Silva right now is almost impossible. Right now it is Bernardo and 10 more players,” said Pep Guardiola as City geared up in February for the sprint to the Premier League finish line. “I don’t know what this guy has done this season. Playing in the middle and outside, every single game he played perfect.”

Pep likes to talk his players up but Bernardo’s contribution spoke for itself. The Portuguese schemer, a £43million signing from Monaco two years ago, was City’s best player in a Treble-winning season, combining creativity with endless graft.

13.7 – Bernardo Silva covered 13.7 kilometres (8.5 miles) against Liverpool, the most by any player in a Premier League game this season. Endurance. pic.twitter.com/QTZewXE1mn