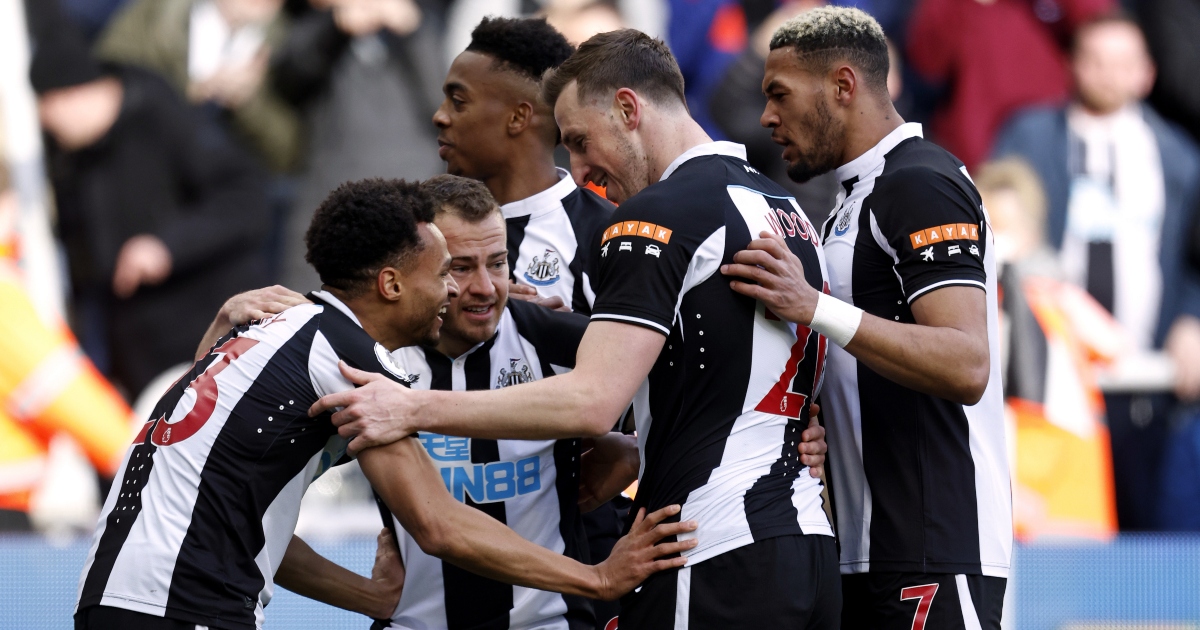 It will be a big summer transfer window for Newcastle United, especially with relegation now looking almost impossible

To bring in the big-name players they desire, some of the current crop will have to leave. Excluding players out of contract, we rank the Magpies’ first-team squad by how likely they are to be sold in the summer.

T24) All four permanent January signings
There is pretty much no chance Chris Wood, Bruno Guimaraes, Dan Burn or Kieran Trippier leave in the summer.

23) Allan Saint-Maximin
The tricky Frenchman is probably the only player that the club’s new owners would want to sign if he wasn’t already at the club.

22) Joe Willock
Willock signed for a reported £25m last summer and is beginning to thrive under head coach Eddie Howe.

21) Joelinton
Newcastle’s club-record signing would have been one of the most likely to leave St James’ Park this summer, but his recent turnaround under Howe has been astonishing. Once a fumbling striker, Joelinton is now a combative box-to-box midfielder and one of the first names on the teamsheet.

20) Callum Wilson
Wilson has struggled with injuries during his whole Newcastle career but his goals have often been their saviour in the Premier League. It’s only his injury-proneness that keeps him lower down this list.

19) Mark Gillespie
Gillespie has three first-team appearances for the Geordies, all of which came in the Carabao Cup last season. But every successful Premier League club has a third/fourth-choice goalkeeper that quietly sits at the back of the coach.

18) Ryan Fraser
One of many resurrected under the management of Howe, Fraser has looked very dangerous in recent weeks and is showing the form once on display in 2018/19 when he provided 21 league goal contributions for Bournemouth.

🏴󠁧󠁢󠁳󠁣󠁴󠁿 | Ryan Fraser has been nominated for February's Premier League player of the month award.

Get in, Ryan 💪 #NUFC pic.twitter.com/jFisSfMtEj

17) Jonjo Shelvey
Unless Barcelona or Real Madrid come calling, Shelvey will likely be at Newcastle next season and he might retain his starting spot if Bruno Guimaraes continues to be limited to short cameos every week.

16) Martin Dubravka
The Magpies’ No. 1 goalkeeper could be off in the summer with his current employers reportedly chasing a new shot-stopper. Dubravka will not be short of options if he is replaced.

15) Jacob Murphy
Under contract until 2027, Murphy has made over 90 appearances for Newcastle, scoring five goals in the process. His versatility and contract situation could be his saving here as he continues to be nothing more than average in the Premier League.

14) Javier Manquillo
Another versatile player, Manquillo can play left or right-back, but is definitely not safe from having to relocate in a few months. Having played for Sunderland, Newcastle, Liverpool and Atletico Madrid in his career, it will be interesting to see who signs the 27-year-old (really?) out of Real Madrid and Everton…

13) Matt Ritchie
Ritchie is out of contract in 2023 and not exactly a fan favourite on Tyneside. Newcastle paid £10m to sign him in 2016 and will be extremely lucky to receive a quarter of that if he is put on the chopping block this summer.

12) Isaac Hayden
A report earlier this week claimed that Newcastle are looking to sell seven players in the summer with the ambition of raising £70m; Hayden was one of the seven.

Injuries have been an issue for the 26-year-old in recent seasons, with Hayden out for the rest of 21/22 with a knee problem. He is a solid, combative midfielder, but given his injury record, the Magpies might let him go.

11) Federico Fernandez
The big Argentine centre-half is out of contract next year and his 21/22 campaign has been hampered with injuries. But Fernandez is an underrated player in Howe’s squad and can certainly be utilised as a back-up in the final year of his deal.

10) Jamaal Lascelles
Lascelles might be club captain, but he is certainly not safe. It is hard to see him breaking back into the starting XI given the current form of Dan Burn and Fabian Schar, let alone when Newcastle inevitably spend £100m on players in his position in the summer window.

9) Emil Krafth
Krafth has struggled in the Premier League this season, there is no doubt about that. The Swede will get some good game time in the final third of 21/22 with January signing Trippier injured, but given Newcastle’s newfound wealth, it is difficult to see them settling with Krafth as their second-choice right-back.

8) Miguel Almiron
Almiron joined for a club-record £21m but has failed to live up to his price-tag. His game time under Howe has been limited and now that it is clear the tireless Paraguay international isn’t good enough to cut it in the Premier League, he will likely be sold in the summer.

7) Dwight Gayle
Gayle is one of those players who has proven to be too good for the second tier of English football but not good enough for the top flight. He has played seven minutes under Howe and it is probably about time he goes back to where he belongs: the Championship. Presumably West Brom.

6) Matty Longstaff
Matty’s older brother, Sean, is out of contract in the summer and could potentially leave for nothing, years after being linked with a £50m move to Manchester United.

The younger Longstaff is currently on loan at Mansfield Town after a terrible spell north of the border with Aberdeen. Once a promising young player at the club, the 21-year-old will likely be loaned out again or let go on a permanent basis when the transfer window re-opens.

5) Karl Darlow
Darlow has always been there to fill in when needed, but with the Geordies looking at a new goalkeeper, the 31-year-old is in danger of falling further down the pecking order.

It’s about time he got some consistent game time and left; a move would suit both parties.

4) Ciaran Clark
Clark is another one of the seven players reportedly surplus to requirements, and it is not difficult to work out why.

The 32-year-old has been at Newcastle since 2016 and has made 129 appearances for the Geordies, but it looks like his race is run.

Since his red card against Norwich, Clark has played in two games and is probably Howe’s fifth-choice in his position. With his contract expiring next year, it is highly likely that Newcastle will let him leave.

3) Freddie Woodman
Woodman is another ‘keeper behind Dubravka in the pecking order and has spent more time out on loan than at his parent club. After a successful two-year loan spell with Swansea City, Woodman returned to Newcastle last summer and he started the opening four league games of the season. A hip injury ruled him out until late December and now the 25-year-old is on loan at Bournemouth.

The shot-stopper is entering his prime years and if he is second or third choice now, he has no chance of claiming the No. 1 shirt next season. He should move for his own good.

2) Jeff Hendrick
Hendrick joined Newcastle on a free transfer in 2020 following the expiry of his Burnley contract, and he has struggled to endear himself to the club’s fanbase.

1) Jamal Lewis
Lewis was not included in Howe’s 25-man Premier League squad due to an ongoing groin problem and his future in the north east looks pretty bleak.

The 24-year-old joined Newcastle from Norwich for a fee in the region of £15m and has struggled to perform under both Steve Bruce and Howe. He has made 32 appearances for the Magpies and it would be a surprise to see him make his 33rd.

Lewis – who was linked with Liverpool during his time at Carrow Road – is still young and can improve, but his prime years will not come at St James’ Park. This Newcastle project will have no patience.