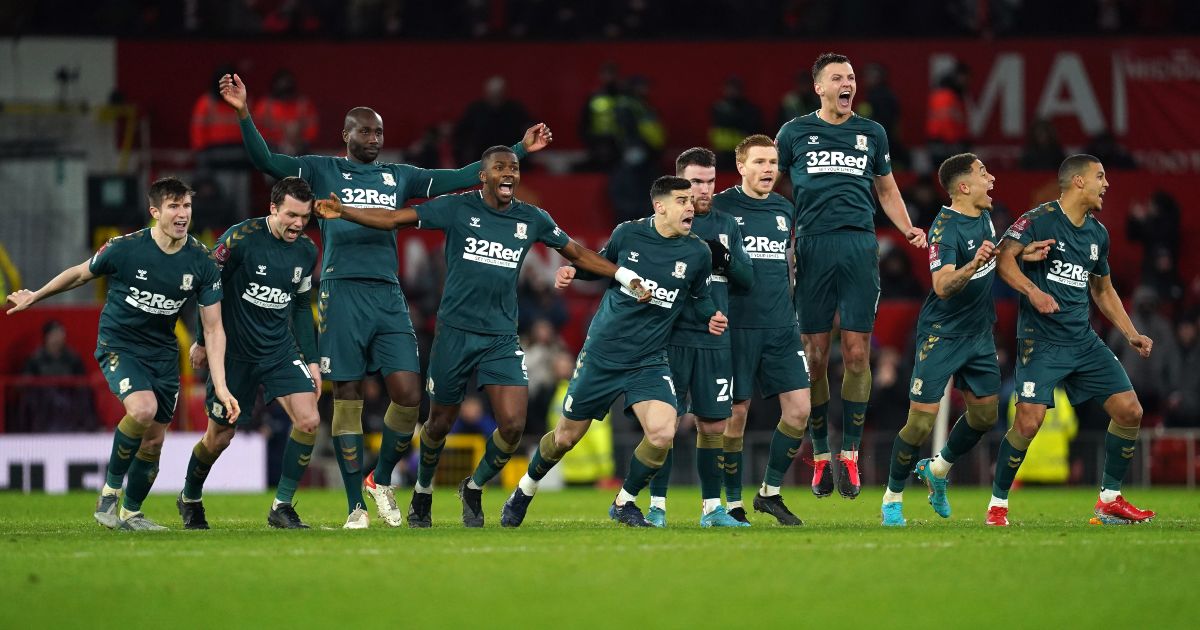 Do fans of big clubs envy those of Middlesbrough et al who feel greater joy simply because expectations are lower?

I often wonder if fans of big successful teams look at fans of smaller, lower-league, usually unsuccessful sides (like my club Middlesbrough) with envy. Probably not. We’re all stuck with our teams and it’s not that I seek to rank one set of fans above another, but our experiences of football – while unified by many common perspectives and values – are, in other ways, very different. And a good round of the FA Cup really shows us this clearly.

Boro overcame Manchester United and look at our joy at beating you. You’re massive. We’re not. You can never really know what this feels like. It feels like this.

Words can’t describe what tonight was like, no words. Up. The. Fucking. Boro ❤️❤️❤️❤️❤️❤️❤️ pic.twitter.com/6fjfexlnE6

Look at those Boreham Wood and Nottingham Forest fans; this was a day of intense joy. Even those clubs which eventually lost like Plymouth and Kidderminster Harriers…that loss felt like some kind of win.

These are very different fan experiences to those experienced by supporters of big clubs.

When you support a top club in 2022, you’re a revenue statistic in a giant money-making machine, your loyalty and passion used and abused by distant owners whose wealth is beyond our understanding. Every win is merely expected, every loss is a humiliation for fans, but every loss is only important to the club if it has a financial impact and the FA Cup does not. Winning it would only pay David De Gea’s wages for about five weeks. And by the way, those wee clubs only picked up £90,000 for a fourth-round win and it is not a sum commensurate with the effort they have put in.

Smaller clubs are not football nirvanas and have many problems, many of their own making, but they are of a different nature and scale to the big clubs. As fans we usually have no sense of entitlement. We usually expect little and most of us demand almost nothing, other than the survival of the club. We’d like to get promoted, but we suspect we won’t, so if we do, it will be another great surprise. We’d love to win a cup, but know we won’t. We don’t fret about it. Some seasons the football hurts your eyes, sometimes it doesn’t. It is the same for supporters of almost all football clubs, but it isn’t for the biggest of clubs. Their experience and attitude is, mostly because of the expectation the financial nature and size of the club inculcates, entirely different.

When Boro play a big club like United, it is an occasion in a way that such a game never is for the bigger club. For them, it’s a bit of a pain in the arse. For us, it’s a no-lose situation. If we get beaten we take what silver linings we can, but when, as on Friday, we win, then all hell breaks loose and you’ll have to knock us off the ceiling with a brush for the rest of the week.

Boro’s win at Old Trafford will go down in our history as A Big Thing. It will, quite literally, be talked about for decades. But for youse lot at United? Well, it’s just another bad vibe you’ll try and swallow down. Another small dent to your pride.

If you’re the fan of one of the very few clubs who are now serial winners, I do wonder if it is possible to feel quite as thrilled about a title win when it’s the third or fourth in recent years. Any cup when you’ve won several already. A basic understanding of human nature tells us that experiencing something frequently diminishes the level of joy that experience delivers.

This is why I’m genuinely not a fan of regular success, convinced it reduces pleasure in that success. The disappointments and dejection of football is where the soul of the game lies. The opportunities for laying off misery and discontent on your useless, failing team is one of football’s great societal pressure valves. Equally, unexpected success offers an intensity of joy that only something which is not expected can do.

You support who you support and whoever that is, you make the best of it. And I wouldn’t seek to disregard or minimise anyone’s experience at any club. There is plenty to enjoy, even if your club is the richest and the best on earth. That being said, for them second is nowhere, but for us, second is magnificent. There is a huge gulf between those standpoints.

Big clubs are at the sharp end of football’s economics – they’re spending incomprehensibly huge money on players who then don’t put in performances that seem in any way commensurate with that fee. Inevitably it makes people annoyed and feel a bit cheated. This is not a luxury lower leagues enjoy.

Hammering a side with far less resources is entertaining enough, I’m sure, but it is jeopardy that we really live for in competitive sport. When you support a side that is much better than 98% of other clubs in the pyramid, inevitably the jeopardy is far less.

Manchester United fans can never feel the intense joy of beating a side so much bigger and well-resourced than them, because no such team exists. That must be so weird. Surely, when you are expecting to win, winning is merely achieving par. Great, but not set-your-hair-alight fantastic. Anything less is just a bit disappointing.

But for the vast majority of us farty idiots who follow unsuccessful clubs, winning really isn’t what football is all about. It’s about trying to win. It is the journey not the destination that is everything. So when you have a good season, get promoted, win a league, or beat one of the big clubs in the cup, it feels hyper real, shocking and almost unbelievable in a way it simply cannot if you support a big club where it is expected.

Boro won’t win the cup. But that does not matter. We have Friday’s result to keep us warm for many years, precisely because such days hardly ever happen. And I wouldn’t want it any other way.