Home Johnny Nic Do you have any rare football records in your loft? 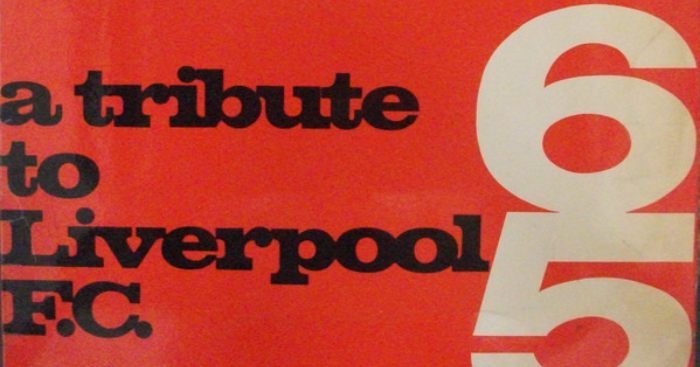 Collecting vinyl records really isn’t something you should do. It’ll absorb a lot of your money, it will send you raking through dusty boxes in damp charity shops, junk stores and small record shops run by eccentrics who will look witheringly at whatever you buy.

You will meet some odd people with odd obsessions. You will end up knowing about etchings in groove run-offs, obi strips, promos, test pressings, first pressings, flip back sleeves, export labels and catalogue numbers. And you too will become obsessed with these things and develop a sixth sense for when something is rare and collectable and when it isn’t.

Collecting isn’t a hobby, it is a state of mind. You’re either a collector or you’re not. If you’re not it looks bizarre. Why would anyone spend all day at a record fair looking through thousands of records on the off-chance one is on the Fillmore label because you’re collecting the 22 records it released? Why would you fill your house with thousands of the things which cost a small fortune to move house with?

And yet to those of us for whom this has been a way of life since our early teens, the simple joy it brings is almost without measure. As Jeff, a record shop owner and one of the recurring characters in my Nick Guymer novels, says in the novel I’ve just completed: “I knew you wouldn’t die, Nick.” “How come?” “Because we’ve not played that haul of Babe Ruth singles on Harvest yet.” Yes, you really would stay alive if there was an unplayed haul of records by a band you loved.

When this passion collides with a love of football, you’ve got a huge genre to begin to hunt down. Football records are plentiful and usually don’t cost much. So many singles have been released by cup final, promotion and World Cup squads and almost all of them are terrible. However, it is important to understand that the quality of a record has nothing to do with the desirability to collect it. Having it is more important than playing it. If you don’t understand why, then you’re not a collector. Sorry.

But there are some valuable football-related records to look out for, or perhaps you’ve got them in the loft unplayed for 40 years.

It’s a fantastic instrumental record, a mash-up of reggae and bluesy guitar with crowd noise and a ref’s whistle in the background. The best record to mention the World Cup, or indeed, football in general. It’s rare and will cost you up to £100.

But of course, that isn’t a real football record. Real football records should feature a team in some capacity or other. It was commonplace right up to the late 70s for FA Cup final highlights from a commentary to be released on an album.

While plenty of 7” Singles made the charts, albums simply never did. It was fine seeing your team labouring over a song on Top Of The Pops but no-one wanted a whole 45 minutes of players grunting out songs whilst dressed in grey slacks and blue V-neck lambswool sweaters. 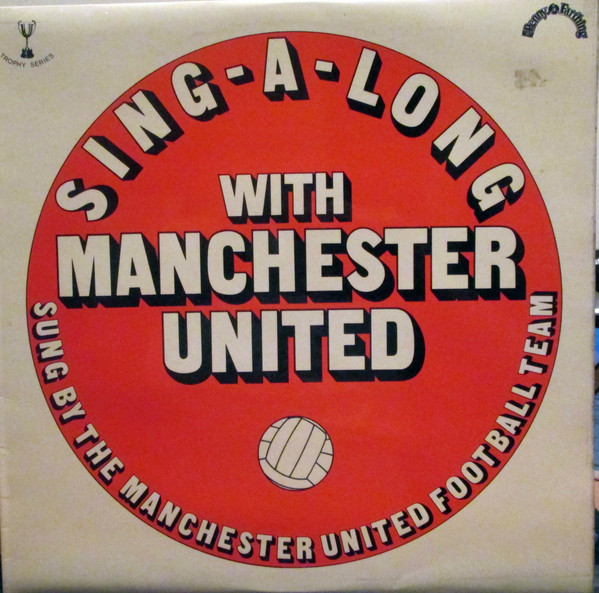 …which saw the especially average team (they’d finished eighth in 1971-72) massacre songs such as Yellow Submarine, Oh! What A Lovely Morning, Storm In A Tea Cup, Congratulations and, God help us, Chirpy Chirpy Cheep Cheep. History doesn’t record how many this sold but it can’t have been many as someone is currently selling this for £26. 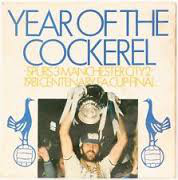 It’s the commentary highlights from the 1981 FA Cup final which Spurs won 3-2 ver Man City. This sells for up to £25. 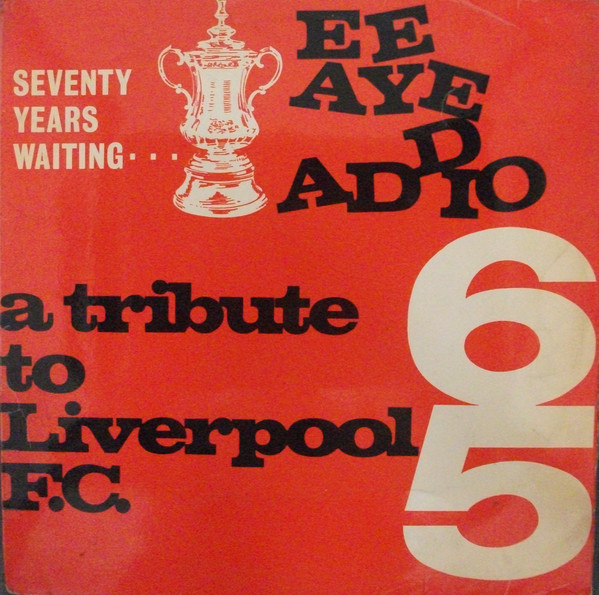 At the more pricey end of the market is Everton F.C. – Champions – The Official Everton FC Souvenir Album. In 1985 it was released on a proper record label. Columbia – EG 2403901 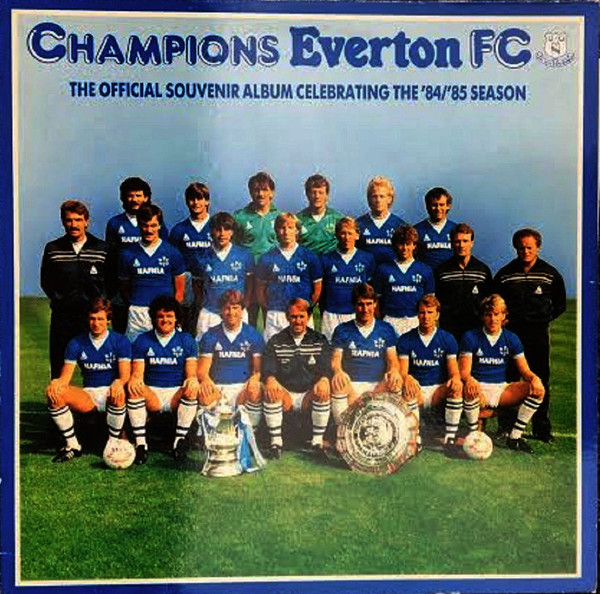 It is described thus:

‘The heart-warming and often amusing story of the Blues’ return to the top of English football including live commentaries of 50 memorable goals, exclusive interviews with the players who became Kings of Europe and the songs they sang. Introduced by Clive Tyldesley.

This is a more ambitious affair and should’ve been copied by more teams as its combination of clips and interviews is far more entertaining and it now sells for £30 – £40. I wonder if Clive has any copies? 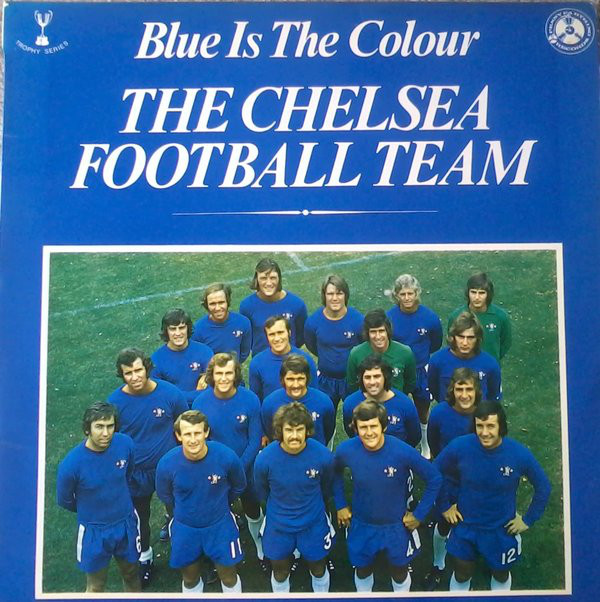 The title track was a #5 hit in the UK in 1972. It was unusual in that it was released to celebrate getting to the League Cup final rather than the FA Cup final. They lost to Stoke City, of course, but the song has stuck around ever since.

The album however, is a different beast. The cover photo of the squad makes them look more like a bunch of mercenaries. Ron Harris looks like a 1950s gangster and John Dempsey’s hair is just upsetting. Alan Hudson looks very miserable and whoever it is second from the right at the back appears to have a silver helmet on. Musically it is an almost sinister mix of current pop songs and cockernee knees-up.

Like United they also do the appalling Chirpy Chirpy Cheep Cheep. I swear you can hear Chopper shouting the lyrics like it’s a death threat. They make a heinous bellowing noise to Chicory Tip’s (UK #1 USA #91) Son Of My Father – the first chart-topper that featured a Moog synthesiser, dontcha know.

But it is the ‘London Medley’ comprising ‘Maybe It’s Because I’m A Londoner’, ‘Let’s All Go Down The Strand’, ‘On Mother Kelly’s Doorstep’ and ‘Strollin’ that really reaches fork-biting levels of torture. Peter Bonetti must hae been called The Cat because of his screeched caterwauling rather than agility.

And people happily hand over four sheets for this because it is rare. Unlike the single, the album did no business, what copies it did sell have probably been smashed, so there are only a few surviving.

Football record-collecting is a great niche to explore. As ever with vinyl records you get art, history, and music (sort of) all rolled together into one artefact. Perfect.